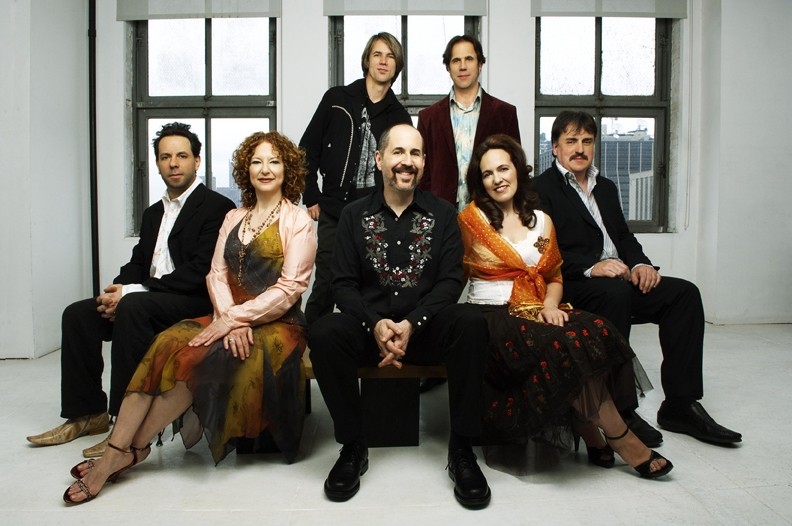 Traditional klezmer—music rooted in Eastern European Jewish heritage and often sung in Yiddish—melds with social consciousness, Arabic and African rhythms, influenced by the artistry of Woody Guthrie, and molded around the fearless form crafted by Yiddish poets, with a smattering of reefer culture thrown in for good measure. At least, that’s the approach taken by the Klezmatics, the only klezmer-based group ever to win a Grammy award, and one of the few klezmer bands to find its way to the Central Coast. They’ll perform at the PAC on Feb. 22.

For their concert at the PAC, the Klezmatics will be unleashing a little bit of everything they’ve got, from songs from their most recent album, Wonder Wheel, which was released in 2006, to socialist anthems to klezmer dance music. There is no artistic space the group has not, or refuses to, inhabit; last year they performed a gospel tour for Christmas and a Hanukkah tour for the Jewish holiday. Twice they’ve sold out performances at Carnegie Hall, and have a third scheduled just after their Central Coast debut. They played in a dome overlooking Rio de Janeiro, in a basement club in Slovenia with a legendary 80-year-old gypsy clarinetist, and in Hungary just after the Berlin Wall was toppled.

The wild ride began in Manhattan in 1986 when the five founding members responded to an ad in The Village Voice seeking musicians interested in performing klezmer. Frank London, who plays trumpet and keyboards for the group, had already been performing klezmer for nearly a decade with the Klezmer Conservatory Band. But he never heard the music until he reached adulthood.

“When we first started playing this back when young people had not heard it, it didn’t make any difference if you were good or bad, just the fact that you were playing this music made people really happy,” he said. “It keeps going in cycles. There’s always new audiences. At this point in history, the music is alive. When I first started this, when you told people you played klezmer they asked, ‘What’s that?’”

It took about a decade for the newness to wear off the freshly rediscovered musical genre, but once it did, the music became even more interesting, according to London. Musicians, singers, and bands began to experiment, though few took this fusion as far as the Klezmatics. Individually, the performers can trace their artistic roots to jazz, rock, avant-garde, and folk and classical music. To call the hybrid sound that has evolved from their eagerness to collaborate and explore klezmer would be an oversimplification.

The ninth and most recent album, Wonder Wheel, came about when Nora Guthrie, Woody Guthrie’s daughter and granddaughter of Yiddish poet Aliza Greenblatt, invited the Klezmatics to record a collection of Jewish songs that Woody had written. It would be the group’s first entirely English undertaking; for the first 15 years of their existence the group performed only in Yiddish. It was the perfect partnership for a group comprised of musicians who compose melodies but don’t write lyrics. And Woody’s not the Klezmatics’ only source for lyrics.

“Often we find interesting words that haven’t been said,” explained London. “Once I wanted to write a Yiddish ode to smoking marijuana because no one had ever done it.” He found a friend, and Yiddish expert, to pen the anthem.

London also insists that the group’s penchant for cross-cultural collaboration and social justice—among their awards is a Gay and Lesbian American Music Award for their album The Well—is not a response to particular political events so much as a statement of belief born from a desire to impact the world positively. And though the Klezmatics are undoubtedly influenced by world events, they don’t allow other people’s attitudes to affect the choices that they make as a group. But that doesn’t necessarily allow them to escape the burden of representation.

“We go to places where there are no Jews, either because they were there but they were all killed or because they were simply never there,” said London. “But we’re representing so many things. Like it or not, we represent America. And I’m always aware of this. It was interesting how we received lots of resentment during the last eight years for our country’s policies. When we were performing after Obama’s election we were perceived as heroes.”

When London first joined the group he could not have foreseen that the Klezmatics would become cultural and artistic ambassadors of sorts. In fact, the group’s remarkable success is still a source of awe for him, the happy byproduct of a simple and noble aim: to produce good music. The band performs somewhere between 60 and 70 gigs per year, traveling non-stop for months at a time before taking a well-earned, month-long break.

Bringing klezmer to a space and city generally unaccustomed to the genre is not at all daunting for the Klezmatics. In fact, according to London, it’s often downright exciting to introduce the music to new audiences. And while the PAC isn’t exactly the sort of venue that allows for happy feet to express themselves in dance, the eager and eclectic rhythms issuing from the various instruments and voices will likely have audience members dreaming about far-off Mermaid Avenue where “there’s never been a mermaid.”

“We’re literally at home in all sorts of different venues,” concluded London. “We basically got our start playing rock and jazz clubs. I think, whatever the venue is, that’s where we’ll be and we’ll engage the people on those terms. We’ll play to the space. What else can you do?” ∆