The idea was to make a short film with zero budget, with aspirations of winning an Oscar. Writer/director Bryan Duggan thought it was impossible. 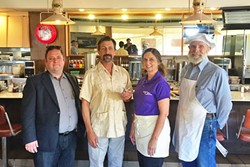 Duggan, an LA transplant living in Los Osos, happily joined the San Luis Obispo Film Collective and was eager to participate in the group’s efforts to choose a screenplay written by one of their members to turn into a movie. But doing all of that with no money didn’t compute for the longtime film veteran.

“My initial reaction was, ‘That can’t be done,’” Duggan said. “I’ve been in the industry for 30 years, and this was probably one of the most magical experiences I’ve had because of the people. On the Central Coast it’s all about helping each other and just being human.”

The group voted to turn One with Everything, a screenplay by local writer Johnny White, into a 10-minute movie. Duggan, with a history of directing national commercials for companies like Disney and whose film The World’s Largest Ball of Twine won best documentary at the San Luis Obispo International Film Festival, was tapped to direct.

The premise of the film is all about happiness and enjoying what’s good, right now. 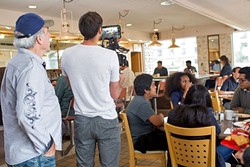 “It’s about a discombobulated ad executive [Brent Mark],” Duggan said. “He has the BMW, everything that money can buy, but he’s unhappy even though he’s in a job that anyone would die for. He ends up going to a diner and he leaves there enlightened, and it’s all because of a hamburger.”

Mark’s character, Matt, also gets an assist on his path to enlightenment from his fellow diner, the ever-calm Sid (John Marrs, recently cast in Cut Jasmine).

By August, they were ready to start filming. One with Everything is set at a diner and Margie Johnson, owner of the iconic Margie’s Diner in SLO, agreed to let the group film at her diner for free for a few days and even threw in a free meal for the cast and crew (who all worked for free on the passion project). The Creston-based production company Hollywood Motion Picture Experience donated lighting equipment to the film. Duggan and White collectively chipped in $1,000 for food, hard drives for editing, and wardrobe. The diner even stayed open during filming, asking real customers if they wanted to be in the movie.

Music and editing is currently wrapping up for One with Everything. Duggan and White (who’s currently traveling abroad and was unavailable for comment) plan to enter their short in the SLO International Film Festival, and as far as their Oscar dreams go, the 10-minute film needs to win its category at a film festival in September to be eligible to be apply in October for Oscar nomination consideration.

“Anything is possible,” Duggan said. “I’d like people [watching One with Everything] to laugh, to maybe see something in themselves and realize there’s a lot to be said for mindfulness and just being present in terms of happiness and enjoying life.”