Choreographers—and armchair philosophers—Diana Stanton and Jude Clark-Warnisher theorize that presence is not always a given. That is, a being might be physically present, but mentally or emotionally absent. In fact, when people are constantly pressured to accomplish more, faster, it makes sense to lapse into a kind of autopilot. Their hope with Variable Velocity’s ninth dance show, June 3 to 5 at the Spanos Theater, is to revel in and explore The Treasure of Presence.

“In the midst of chaos and a lot to do it’s pretty hard to find time to be in the moment,” acknowledged Stanton, who is also an assistant professor of dance at Cal Poly, and director of the college’s Orchesis Dance Company. “We are going to focus the show on the idea of being present, of anti-presence, and trying to maintain presence in the midst of distractions.”

As is always the case with the modern dance company’s founders, their seed idea quickly became an avalanche of definitions, psychology, music, and, of course, movement. The company’s 19 dancers—a larger talent pool than the company is used to seeing—will introduce themselves and the theme with an opening piece called “Viscera”. To make the audience more fully aware of its presence in a theater, at a dance show, “Viscera” is transparent as a performance. The dancers clap onstage as the set rises. The tech crew inhabits the stage. Costume changes occur onstage.

And finally, each of the dancers presents what Stanton calls a “nugget,” a brief narrative movement that conveys a moment when they are fully present. For some, this was petting their cat, for others a morning cup of coffee. According to Stanton, “Viscera” explores the evening’s theme through the physical style of dance, the heightened energy and pace.

“One of the ways that I stay present is by being ultra-physical,” she explained. “I can’t think about my grocery list when I have 20 dancers right here. Quite frankly neither of us has time to work outside of here. Dance is difficult.” 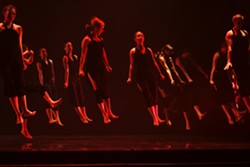 Improv also plays an important role in the performance, because it demands absolute presence from the performer and tech crew. Stanton plans to perform a brief improvisational dance while attached to a heart monitor that will allow the audience to hear or see—depending on the success of her technological exploits—the shifts in her cardiac rate as she begins to dance. Each performance she will line her dancers up—execution-style—and select three to perform a random act of support during her solo, create an artistic landscape of sorts.

Clark-Warnisher will have her own improvisational solo as well, which depends upon the whims of that evening’s audience. The performer has three separate solos, each to a jazz piano classic—“Someone to Watch Over Me,” “My Foolish Heart,” and “The Nearness of You”—and each night the audience gets to choose which she will dance.

Pushing deadlines is nothing new to the Variable Velocity team. Ideas evolve and develop, after all, and the dancers have jobs, classes, and creative endeavors besides their hectic rehearsal schedule. When Stanton announces that her partner in dance will be presenting a film during the show, Clark-Warnisher adds a wry, “Yeah, hopefully.” 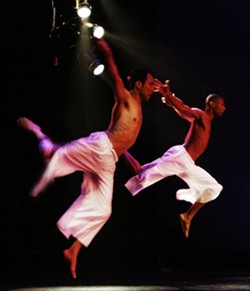 During her spring break from teaching at Cuesta College, Clark-Warnisher visited Joshua Tree, and confronted her insignificance in the desert. Fascinated with shadows and abandoned mines, the artist developed an idea of her own existence and presence as bound to a timeless life cycle, much greater than herself. Two hours of film footage will be pared down to somewhere between three and five minutes, a ghost story. She will probably also recite a monologue later in the performance, all evidence of her developing identity as a performance artist. Clark-Warnisher acknowledges that she’s renegotiating her artistic identity as she ages. There are things she can’t do anymore.

“Having to let go of that, that’s not really an easy thing to do,” she said. “Especially when in the past you were able to do whatever you wanted to do physically.” To her credit, this transition is not a death knell to her art, or even dance. In fact, Stanton is using it as an artistic springboard for a group dance called “State of Grace.”

“State of Grace” begins with all of the dancers, stripped down into white costumes that somewhat resemble undergarments. Then the focus shifts to five soloists, representing the same individual at different phases of their life: teens, 20s, 30s, 40s (represented by Stanton), and 50s (represented by Clark-Warnisher). Wearing elaborate jewel-toned gowns, the soloists express the challenges and rewards that attend each decade. Stanton’s ultimate point is that it’s wiser to appreciate and savor each phase, to be truly present, rather than look back to an increasingly distant youth.

Stanton’s second group piece, “Daedal,” was inspired by her dictionary.com word of the day. The word means “skillful,” “artistic,” “intricate,” and got Stanton thinking about choreography as a kind of craft. She thought about the Greek mythological character, Daedalus, who was held hostage in Crete by King Minos so that he would create a labyrinth. With all of this in her head, she choreographed a dance with three parts, with dancers spinning wildly, creating elaborate spatial patterns. “It’s a little dangerous actually, trying to get through it without crashing,” admitted Stanton.

As always, the breaks between dances will be filled with Variable Velocity interludes and antics—usually comic and always unexpected. This time around, they use these moments as an opportunity to demonstrate “striking and pertinent examples of non-presence in our culture.”

Next year, Variable Velocity will be re-locating to the much larger Cohan Center. The cost of renting the Cohan Center has always been too steep for the contemporary dance company, but thanks to a Bravo Grant from the Foundation for the Performing Arts, the company’s 10th show will be bigger, and better, than ever. But in the meantime, Variable Velocity requests your presence.