The Tibetan Buddhist tradition of debate seems to neatly exemplify this. Monks memorize texts, meditate on them, and come to their own conclusions about what they mean. In debate, this study is put to the test.

A Challenger stands and asks questions, punctuating his enquiries with a clap of the hands and stomp of the feet. A Defender sits on the ground and attempts to answer. Debates in a Tibetan Buddhist monastery are typically held en masse, so that the Challenger and Defender are surrounded by the shouts and claps of other debating monks. The din fosters excellent concentration.

Geshe Lobsang Tsetsen is a monk at the Drepung Gomang Monastery, a center of learning for Tibetan Buddhists in southern India. Logic and debate is Gomang’s particular specialty, and monks generally spend several hours in the morning and evening debating one another on a wide range of topics.

“Debating is really useful for understanding a topic,” said Tsetsen, commonly referred to by his title “Geshe,” which represents the high degree in Buddhist philosophy he has earned; an equivalent of the Western doctorate degree. “Reading a book does not make for a deeper understanding. Even though I have some understanding, I am forgetting very easily. Through debating, I am more deeply understanding.”

When I spoke to Geshe Tsetsen, he was not in India but in Tuscon, Ariz., leading a North American tour with eight other Gomang monks who, by the time this story goes to press, will have reached San Luis Obispo County. As on previous sojourns, the monks will stay at the Atascadero home of Anet and Charley Carlin, while offering teachings, blessings, and performances throughout the county before leaving for San Francisco on Oct. 19.

The monks’ upcoming visit gave me occasion to ask Geshe Tsetsen a number of questions about monastic life, a type of existence that’s in many ways the polar opposite of anything one would encounter in the West. Even my way of talking, compared to Geshe’s simple, considered answers, began to seem terribly informal, superficial, hurried, idiomatic. A telephone call with a monk will do that.

The tradition of ritualized debates was among the first topics of our discussion.

Tibetan Buddhist monks memorize several Indian and Tibetan texts over the course of many years, but their knowledge is tested through the dialectical approach. Debates, however, don’t necessarily stick to academics or scripture, as Geshe explained: “Any topic. Not a limit on the topic. All phenomena. We have to have specific definitions. Like compassion: What does compassion mean? How we get true compassion? What is consciousness, or mindfulness?”

The term “debate,” in fact, is not a direct translation. The Tibetan word is “definitions,” as determining and agreeing upon what a term means is essential to the process.

The animated nature of the debates imbues them with high theatrical value, quickly taking on the qualities of a performance. Abbreviated versions of these debates will be presented as part of the Gomang monk’s series of cultural performances, with audiences encouraged to look out for important gestures and phrases. Even the clapping of the hands holds symbolic significance, as Daniel Purdue, author of Debate in Tibetan Buddhism, writes: “In their understanding of the gesture, the right hand represents method, meaning especially the practice of compassion, and the left hand represents wisdom. Bringing the two hands together represents the joining of wisdom and method. At the moment of the clap, you hear the left foot stomp down and that represents slamming shut the door to rebirth in the lower levels. After the simultaneous clap and stomp, the Challenger holds out the left arm of wisdom to keep shut the door to all rebirth. Also, in that gesture, the Challenger uses his right hand to raise up his prayer beads around his left arm. This represents the fulfillment of the efforts of compassion, in lifting up all suffering beings out of the round of rebirth.”

The Defender has three ways of answering a question: dö, meaning “I accept;” ta madrup, meaning “the reason is not established; or khyappa majung, or “there is no pervasion.”

Anet and Charley Carlin have been playing host to monks at their spacious Atascadero home for many years now. The Carlins may be best known for their work in the performing arts: Anet is a longtime theater director, and the couple annually transforms their courtyard into the Brickyard Theatre, where they’ve staged plays almost every summer since 2004. When I spoke with Anet, the Brickyard had only recently wrapped its production of Yazmina Reza’s The Unexpected Man.

Raised Southern Baptist, Anet became interested in Buddhism in her early 20s, after reading several books on the topic of Zen Buddhism. 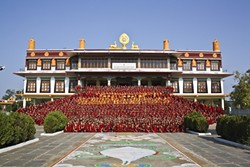 “It was like hearing a language I had spoken all my life, but had never heard aloud,” she recalled.

Anet has carried on an “intellectual relationship” with Buddhism ever since, she said, and she and Charley began offering a place to stay for Buddhist monks in the late ’90s, and the sight of men in robes playing pinball or shooting hoops became something of a regularity in the couple’s household. The monks who visited taught them to make dumpling soup and held intimate concerts of traditional Tibetan music in their courtyard. It was such a performance, in fact, that inspired the Brickyard Theatre.

“My husband was watching me just enthralled by the music, and he said, ‘I’m going to build a theater for you,’” Anet said.

(At the same performance, Anet laughingly adds, she recalls hearing a little boy announce, “This is the worst band I have ever heard in my life.”)

Thanks to Anet’s efforts, the Gomang monks’ touring schedule this year is practically bursting with opportunities for cultural understanding. While in San Luis Obispo County, the monks plan to engage with the community every day, creating sand mandalas, offering Buddhist teachings, performing traditional dances, and offering a puja, or blessing, on homes, businesses, and people in need.

According to Geshe Tsetsen, the mandala is one of the most popular elements of the monks’ tour. He describes the mandala as “an imaginary palace of Buddha” and a symbol of impermanence—a major tenet of Buddhism. 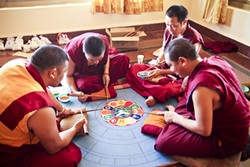 “Purpose of mandala is a method for meditation,” Geshe went on. “A technique of how to reduce our negative emotions. So to do mandala, we can learn about compassion and the reality of wisdom. We can also release our negative emotions. Ignorance, attachment, anger … that kind of emotion is negative because it can bring us suffering. So to reduce, that’s how we will bring full happiness in our minds. This is the purpose of the mandala.”

The creation of this mind palace typically takes several days. The site of the mandala is first consecrated through an opening ceremony of chanting, music, and mantras. Then the monks typically begin drawing out the design of the mandala before filling it in with colored sand, using a metal funnel called a chakpur. Once the mandala is completed, the monks destroy it, sweeping up the sand to symbolize the transitory nature of all that exists. The sand is then carried to a flowing body of water where it is ceremonially poured out, representing the dispersal of healing energies throughout the world.

The monks will also present a cultural pageant at several locations throughout the Central Coast, during which they sing, dance, and debate.

Of particular interest is the Yak Dance, which celebrates an animal that performs a multitude of functions in Tibetan life.

“Yak is a special animal in Tibet, and also in Himalayan region,” Geshe Tsetsen said. “Yak are really useful to a family. Every family have to have one or two yak. Without yak, it is not possible to survive their life. In America, everybody have one car or two car. Whereas in our family, you have to have one yak, two yak. These are very useful. Many yak used for farming and transportation, and also yak fur makes clothes and tents. And female yak used for milk, for butter. They are very useful, therefore they are a special animal in Tibet. Therefore we do yak dance.”

The dance seems to depict the gradual reconciliation of man and yak, the latter played by two monks (one animating the head and front legs, the other the animal’s rear). The man and the yak dance in the circle, the man trying to tame the animal as the yak threatens him with his horns, until at last the exhausted pair seems to make friends.

Another dance depicts the snow lion, one of Buddhism’s Four Dignities—four mythological animals representing various qualities. Also a symbol of Tibet, the snow lion symbolizes fearlessness, cheerfulness, and mastery of the mountains. In Tibetan folklore, the snow lion’s milk has healing powers. Its roar is the sound of emptiness, powerful enough to make seven dragons drop right out of the sky.

The search for truth

The Gomang monks’ visit also provides an opportunity for education in Tibetan Buddhist philosophy. Geshe Tsetsen will give several teachings at churches throughout the county. 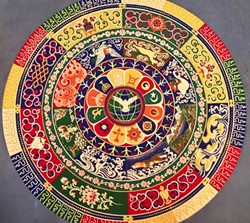 Buddhism is what’s known as a wisdom tradition: Founded in the wisdom of the Buddha, it asserts that we, too, can attain the realizations of the Buddha, and thus become Buddhas ourselves. It wants you reason; it wants you to think. As the Buddha himself said:

“Buddhas neither wash sins away with water,

Nor remove beings’ sufferings with their hands,

Nor transfer their realizations to others; beings

Are freed through the teachings of truth, the nature of things.”

The Gomang Monks will be teaching, performing, and blessing San Luis Obispo County through Oct. 19. The monks’ activities are too numerous to list here (see charley.net for the full lineup), but the following are a few ways to participate:

Witness the creation of a sand mandala. The first mandala will be created at EarthTones Gifts in Paso Robles. On Thursday, Oct. 3 at 9 a.m., the monks will begin a mandala that they will work on through Sunday, Oct. 6. Catch the opening ceremony at 9 a.m. on Thursday, and track the monks’ progress from 9 a.m. to 5 p.m. on Friday and Saturday. On Sunday from 9 am to 3 p.m., the mandala will be completed and ceremonially destroyed. Two more sand mandalas will be created during the monks’ stay, one at Steynberg Gallery in San Luis Obispo and another at Allan Hancock College’s Foxworthy Gallery in Santa Maria.

Pursue wisdom with a Buddhist teaching. Geshe Lobsang Tsetsen will speak on such topics as impermanence, compassion, karma, meditation, and following the truth. The talks will take place at various churches around the county, including United Methodist Church, Unity of San Luis Obispo, Awakening Ways in Atascadero, St. Mary’s Episcopal Church in Lompoc, and St. Peter’s Episcopal Church in Santa Maria.

Attend a cultural pageant. The monks will present an entertaining program of traditional music, chanting, dancing, and debate at several locations throughout the county, including Steynberg Gallery in San Luis Obispo and Awakening Ways in Atascadero. This is a chance to witness the spectacular Yak Dance and Snow Lion Dance, as well as experience firsthand the intensity of Tibetan monastic debate.

Get blessed. The monks take requests for individual blessings, but will also present a public blessing, or puja, with elders of the Chumash tribe at Eldwayen Ocean Park in Shell Beach (on the cliff on Beach Blvd.). The blessing will take place from 2 to 3 p.m. on Monday, Oct. 14.