Papa Pia (followed by the All American Vaudeville Review) will be on stage at the Great American Melodrama through Sept. 21. Tickets range from $23 to $30. Starting July 20, Papa Pia and How The West Was Really Won will show on alternating nights. Visit americanmelodrama.com for tickets and more information.

Oh my cod! You've got to sea this show.

Still with me? Then definitely surf on over to the Great American Melodrama for oceanic puns and Abba inspired song satires galore in the hilarious Mama Mia parody, Papa Pia.

While I love Mama Mia, it always seemed like a stretch that co-creators Benny Andersson and Björn Ulvaeus' listened to a bunch of Abba songs and thought, "You know what the story is here? A young girl in Greece searching for her biological father." Welp, the Melodrama's very own Dan Schultz and Rachel Tietz (with additional material by Toni Anita Hull, Erik Stein, Jordan Richardson, and the company) took it up several notches with their version. 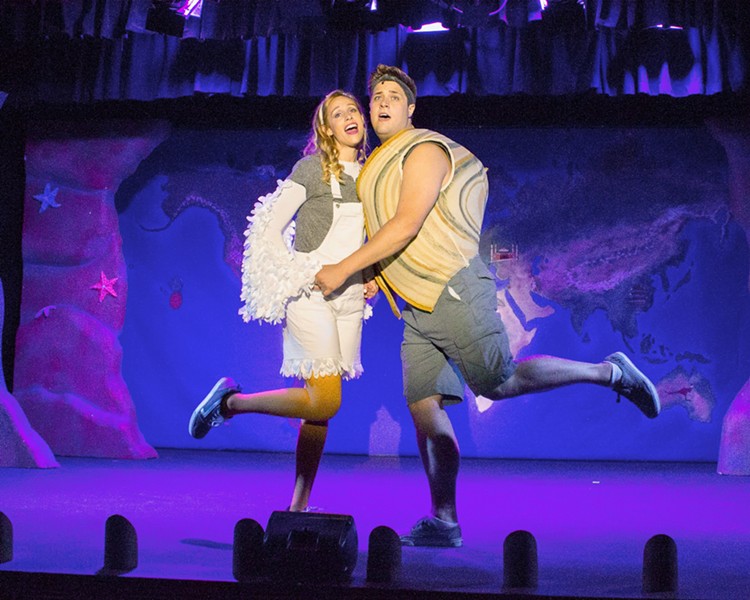 Papa Pia is based on characters and events created in Under The Boardwalk by Stein and Richardson and of course is also a loose parody of Mama Mia. Our show takes place in Pismo Beach, where a young seagull, Sophie (Katie Pautler) and a stud muffin clam like Skye (Henry Fisher) are about to be married. Just like in Mama Mia, Sophia wants to know who her biological father is before her wedding day, so she invites her mom's former seagull beaus, Tom, Dick, and Harry (all played by Ben Abbott, Unnecessary Farce) and chaos ensues.

Meanwhile, Donna (Katie Gucik), Sophie's seagull mom, is overwhelmed with planning her daughter's wedding and trying to save the Pismo Pools from being closed to animals due to humans trying to build a resort. What's a bird to do? There's also an appearance from the sassy Pepper the starfish, Donna's friend from when she was a cool gull in a rock 'n' roll band.

Expect to fight to keep your chocolate cake and wine in your mouth as this show is literally laugh-out-loud funny. To mimic flying, the bird characters in the cast glide about stage on '90s inspired wheelie shoes and to show us how the musical's lovebirds get ready to travel, a toy bird with a plastic clam in its mouth can be seen at one point bobbing over the audience's heads before Sophie and Sky bust into a timely parody of "A Whole New World" from Disney's Aladdin. There's also the B plot romance between Sophie's college friend, Ali the blue jay (Tietz), and Sky's friend, Eddie the oyster (Alejandro Gutierrez, Treasure Island), that results in a shiny pearl. 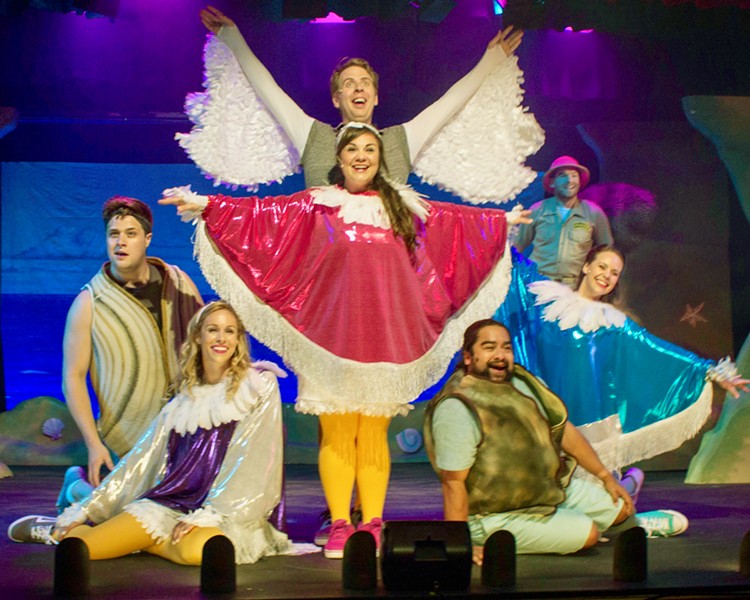 The show opens brightly with the number "Good Morning Pismo Beach" (a nod to Hairspray's "Good Morning Baltimore") and closes with "Seagull Poo!" in place of Abba's classic "Waterloo."

My only complaints for this show are that it felt a tad short and I wanted even more Abba inspired musical parodies (ahem, Tietz and Schultz, "Dancing Queen" and "Lay All Your Love On Me" and especially "Take A Chance On Me" with its reference to "when the pretty birds have flown" deserve full musical numbers! Not just shout outs in a musical medley). But for the time and the money Papa Pia is worth seeing at least once or even twice this summer. Δ

Lay all your love on your local alt weekly. Send compliments to Arts Writer Ryah Cooley at rcooley@newtimesslo.com.