It's May 5 and there's a very long line outside Captain Nemo Games and Comics. A Cinco de Mayo party perhaps? Try another holiday. Revenge of the Fifth? Nope, although I'm sure many of us in attendance, myself included, partook in Star Wars Day (May the Fourth Be With You) festivities only hours ago.

Since 2002, comic book stores in more than 30 countries have participated in Free Comic Day on the first Saturday of May. I like to think of it as wine tasting, or better yet, free samples at Costco for comic book readers. Believe it or not, this is the first time I'm actually taking advantage of this glorious tradition. I've been collecting Batman comics since the Clinton administration, but somehow Free Comic Book Day always passed me by. But not this year.

I pull into the Captain Nemo/Cheap Thrills lot around 11 a.m. only to find out it's completely full. I proceed to park in a metered spot down the block and power walk toward the store (I swear I'm not skipping). I'm in a little bit of a hurry since a group of my friends is already in line, hoping I make it before their section gets let in. I get to them only a few moments before we're allowed to enter. There's music playing inside, and I automatically recognize the song. I already knew today was going to be fun, but the euphoria I feel from hearing Prince's "Batdance" at a public gathering is unprecedented.

My group quickly separates as the browsing process commences. After choosing three books from the official Free Comic Book Day selection (these comics are created specifically for the event), I pick the first unoccupied box of back issues (oldies) I see and start digging through it for hidden gems. I have three more choices to make (guests are allowed to leave with six total). But who am I kidding? They're all going to be Batman. That almost comes true as I pick two with you-know-you. But my third pick is unexpectedly a Fantastic Four comic. To be fair though, it wouldn't have made the cut had it not been for the Batman "Got Milk?" ad on the back cover. I could care less about Mister Fantastic, the Invisible Girl, the Human Torch, or the Thing—Christian Bale with a milk mustache is the only reason I'm taking you home. 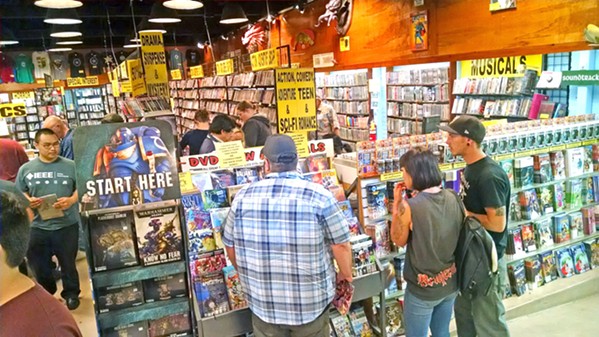 My group reconvenes near the front of Nemo where California-based artist Lance Sawyer is sketching requested characters onto complimentary trading cards. We hop in line and I ponder which comic book hero or villain I want. It's my turn in no time and I'm suddenly Ralphie from A Christmas Story when he forgets what to ask Santa for ("Football? What's a football?"). That only lasts a second though, and I walk out of Nemo minutes later with my six comics and a Riddler rendering signed by Sawyer.

The last song I hear before we exit the building is U2's "Hold Me, Thrill Me, Kiss Me, Kill Me" from the Batman Forever soundtrack. I don't remember what good deeds I could have possible done this week/month/year to deserve this level of good karma. Δ