The first thing I notice when my wife and I arrive at the PAC is the Shatner demographic. If there are any Trekkies here, their nerdiness is well disguised. Everyone looks middle aged, as if they grew up with Shatner. I think my wife Anna is the youngest person in attendance! 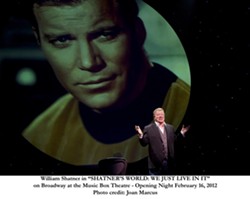 After an adult beverage in the lobby, we take our seats, the lights go down, and Shatner makes his entrance to the theme to Star Trek. The crowd digs him! He tells us about how he caught the acting bug, his love of vaudeville, and his crush on a burlesque dancer. He talks about great entrances, and plays a clip of his entrance on a white horse during a Comedy Central roast of him, then cuts to his Star Trek co-star George Takei’s (aka Hikaru Sulu) witty rejoinder: “Fuck you and the horse you rode in on!”

Interestingly enough, earlier in the day I saw a Takei Facebook post saying Shatner was the “douchiest” actor on Star Trek, explaining how if some bit actor on the show was being prepared for a close-up and a line, Shatner would pull the director to the side, whisper something, and when the director came back, they’d switch the shot to Shatner’s reaction to the bit player’s line, which would be spoken off camera. Hey man, that’s how you become a big star!

Along the way, in addition to his acting career, Shatner shares stories of his career as the owner of a breeding horse, joking first about the act of breeding—the horse thought it was going to get laid but all it got was a hand job—before revealing that as he learned more and more about the horse’s sad life as breeding stock, he began to feel that he’d betrayed the animal.

Shatner’s 81 years old, and you can tell death is on his mind. In addition to telling us about putting his breeding horse down, he tells us about how the filmmakers approached him about killing off Captain Kirk in one of the series’ subsequent films. He talks about the death of his father and how he bought him a cheap pine coffin instead of something fancier, believing his Jewish father would prefer he “spend the money on the living.” He talks about his third wife Nerine drowning in their swimming pool. He even talks about the final words of Timothy Leary (“Of course”) and Steve Jobs (“Oh wow, oh wow, oh wow”), eventually screaming that he wants to know what they saw.

We also learn that Shatner used to hate being known for Captain Kirk until he interviewed the great Shakespearian actor Patrick Stewart, whose distinguished stage career was eclipsed by his role as Captain Jean-Luc Picard in Star Trek: The Next Generation, and how he was not only at peace with it, but proud of it.

Shatner is clearly proud of his life and some of the rare treats his fame brought him: an encounter with the sign-language-speaking gorilla Koko, that a kidney stone he passed raised $25,000 for charity, that he signed the lunar module during a visit to NASA in 1968.

There are the low points, too—giving a tour of his “spaceship” to a young boy who had stumbled across Shatner when he was divorced, broke, and living in his pickup truck.

In the end, the show is upbeat and Shatner triumphant, but his overall point is made clear as he closes his show by talk-singing “I’m Real,” a song from his 2004 album Has Been: “I have saved the world in the movies/ So naturally there’s folks who think I must know what to do/ But just because you’ve seen me on your TV/ Doesn’t mean I’m any more enlightened than you/ And while there’s a part of me/ In that guy you’ve seen/ Up there on that screen/ I am so much more/ And I wish I knew the things you think I do/ I would change this world for sure/ But I eat and sleep and breathe and bleed and feel/ Sorry to disappoint you/ But I’m real.”