'Hey, it's Kiwi Bob!': An exotic fruit is a Central Coast staple thanks to three generations of green dreamers

One dark and stormy Wednesday morning in Nipomo, Bob “Kiwi Bob” Criswell found out just how akin to family his farmers’ market customers truly are. At daybreak, his son, Michael, decided there had been enough snoozing in the Criswell household. Always a fan of selling kiwi at the local farmers’ markets with his family—the same way his father and grandfather had before him—young Michael was adamant.

Why should a little precipitation ruin the whole day?

On a lark, Criswell relented. Armed with a pop-up tent, the father-and-son duo set up their kiwi stand at the Arroyo Grande farmers’ market, despite the streaming rain. 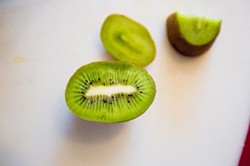 Criswell, affectionately known as “Kiwi Bob,” was shocked at what he found.

“Customers were surprised to see me, and—really—I was surprised to see them,” Criswell said. “You make customers for life going on those rainy days. The sky opens up, and people wait for the rain to pass. You just start talking, and maybe they’ll take some kiwi. Those customers will come back every single week.”

Criswell is no stranger to hearing people gush over the tangy-sweet flavor, supple texture, and dynamic lime green color of his Nipomo-grown fruit. He’s also no stranger to the concept of making friends with his customers: He learned from the best—his father, the original “Kiwi Don.”

However, something crystalized in the second-generation farmer’s mind that rainy day. These people were his people. An unshakable symbiotic relationship  had formed.

“You become such a part of customers’ lives and vice versa,” Criswell said. “If you miss a week, people wonder where you are. People would look for my son’s bright red jacket and follow him to the stand.”

At Mallard Lake Ranch in western Nipomo, 10 acres of kiwifruit vines are now dormant, with a few woody tendrils showing the first blush of bud break. The ranch, planted in 1978 by Don and Jane Criswell (a fifth generation farmer in her own right), produces 65,000 pounds of kiwifruit as well as Zutano avocados and seasonal produce.

Kiwi season runs November through March, and Criswell’s fruit came early this year due to an overall warmer growing season (wine grape growers know this story all too well).

The vine-ripened fruit—which must be harvested in one fell swoop—continues to develop long after picking. Black seeds, a fragrant scent, and a plump surface that yields to slight pressure come together to mean one thing: The soft, slightly fuzzy morsels are ready to devour.

And devour I did.

I gulped glistening green hunks of the New Zealand-born delicacy while standing over Criswell’s kitchen counter. I even consumed the skin, which tastes faintly of peach fuzz (not as scary as I thought it would be).

Always experimenting with the fruit, “Kiwi Bob” whipped up a batch of refreshingly sweet salsa featuring the sticky slices, chopped jalapeño, and roasted tomatillos. Amazingly, the kiwifruit—which had been harvested in November and preserved through a special refrigeration process—tasted absolutely fresh and flavorful.

“I touch kiwi all the time, so I know when they’re ripe, when they’re not,” Criswell said. “That sweet flavor? That’s what you want.”

Criswell’s kiwifruit is by far the best—and sweetest—I have ever tasted in my life. No wonder it’s the muse of local chefs, including Ember’s pastry chef, who has been known to cleverly fuse it into ice cream, cakes, and tarts. Word on the street is the fruit is also set to play a starring roll in a forthcoming Libertine Pub sour beer, which may or may not be an homage to Alpine Beer Company’s popular Kiwi Herman Wild Ale.

Even the kids clamor for Kiwi Bob’s treats: The vitamin C-packed fruit is a staple in public school lunches from Paso Robles to Santa Maria. CSA boxes like SLO Veg and Talley Farms are known to carry Criswell’s surplus. Upscale restaurants like Novo go gaga for it.

When I asked Criswell how it feels to know so many creative chefs are excited about the bounty, he couldn’t contain his enthusiasm.

Years ago, Chef Maegen Loring, now at Niner Wine Estates in Paso Robles, paired several green slices with caviar-topped ahi sashimi. To this day, it is one of Criswell’s favorite twists on kiwi.

“You had this perfect combination of that really clean fish, saltiness of the caviar, and the meatiness of the kiwi,” he said. “I love it when people take an idea and just run with it.”

“They suck ’em down like candy,” Criswell said as we walked through the sustainably farmed vines, bonding over our shared love of raising chickens and Jocko’s Steakhouse.

My advice: Don’t ask Criswell why his fruit is so awesome. Even “Almighty Kiwi Bob” himself can’t explain it fully. The secret is most likely buried in the sandy soil and sweet water (the farm’s duck-filled “lake” is actually a reservoir for the kiwi). The magic is also lingering in the vines themselves—planted more than three decades ago by 76-year-old farmer and family friend, Alex Mendoza.

The old-school farmer, who lives just down the road, acts as a second grandpa to 13-year-old Michael, now “too cool” for farmers’ markets.

Criswell reminisced about selling kiwi with his own father during his high school days. Michael—like his father before him—will one day realize that farmers’ markets are hot spots for meeting  young ladies.

For now, Criswell’s 9-year-old daughter, Camille, has stepped in to help sell the kiwi, although she’s known to be lured away by the heavenly scent of local lavender producers from time to time. Criswell’s wife, Kirsten, takes care of much of the behind-the-scenes work when she’s not behind the stand herself.

The cycle, three generations deep, continues. According to Criswell, that’s all thanks to the loyal patrons who never fail to stop by the weekly farmers’ markets and say “howdy.”

“I don’t want to be a ‘farmers’ market snob,’ but I really couldn’t do it without the people who buy local,” Criswell said. “I like the relationships I have with my customers, and it’s really a two-way street. That’s why I’m always there, rain or shine.”