UPDATE: This story has been updated to correct an error. An incident where former SLO District Attorney's Office Chief Investigator Doug Odom used his firearm to protect against two burglars he found in his home occured in January 1990, not in the 1980s. Odom was a sworn member of law enforcement, as are all DA investigators.

This very minute, more than 470 San Luis Obispo County citizens—perhaps your neighbor or the little old lady on the bus--could be carrying a gun as they go about their day working, shopping, going to church. And it’s completely legal.

That’s according to data received from the sheriff’s department in response to a New Times public records request, which revealed that the number of SLO County residents seeking concealed-carry permits has more than doubled since 2009.

Though the scope of the data doesn’t indicate whether the total number of current permits out there is higher than that of years past, what is gleaned is that immediately after taking office, Sheriff Ian Parkinson—who has the final say on who gets a permit—saw the number of new applications and renewal requests cross his desk more than double from what his predecessor, Pat Hedges, had to deal with in his final year in office. 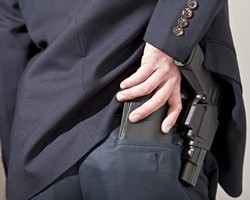 According to records of the last two years of Hedges’ tenure through the first two years of Parkinson’s, the number of new applicants granted a permit has increased the most since 2009, when just 25 people were issued new permits. That number increased by 64 percent to 41 new permits in 2010, and jumped another 85 percent in 2011—the first year Parkinson was at the helm—to 76 new permits. Figures for 2012 were similar, with 77 new permits issued. As of April 1, 13 people have been issued concealed-carry permits and 66 have renewed them in 2013.

But SLO County isn’t considered to be a particularly easy county to get your hands on a concealed-carry permit. The pro-gun rights website calccw.org, for example, which advocates for law-abiding citizens to obtain concealed-carry permits, lists SLO County as a “may issue with outstanding cause, unlikely to issue to ‘average persons.’” county. That’s exactly halfway down the scale, which ranges from “will issue for personal protection” to “no issue to regular citizens.”

Though the majority of the state’s 58 counties are graded in the most lenient category, SLO County lies amid a sea of tougher—as well as more lax—counties. Santa Cruz, Monterey, and Santa Barbara counties, for example, are considered “no issuance” for average citizens, while Kings and Kern counties are graded as “will issue for reasonable cause, known to issue to ‘average persons’” and “will issue for personal protection,” respectively.

“The law says ‘with good cause’ and that’s what I follow,” Parkinson told New Times.

The decision to grant or deny a new permit or renew an old one is not always so clear cut, Parkinson said. First, applicants have a sit-down with the undersheriff to explain why they need the permit, then hand over three letters of reference, pay a $200 application fee, and complete a background check before a four-hour hands-on certification training session.

Parkinson also changed a few of the terms of the permit. For example, he reduced from three to two the number of guns that permitted individuals may legally carry.

“Any more than that and I have to wonder if they really are proficient with a gun,” he said.

Parkinson has the ability to issue a permit good across the entire county, though some cities—with the exception of SLO and Atascadero, which refer all requests to Parkinson—may issue permits valid within city limits. Should an applicant be denied by a city, Parkinson has the ability to overrule the decision, but he “want[s] to see that rejection letter first” and is likely to be more hesitant to issue a permit.

He further said that the main reasons for seeking a permit range from needing to transport large sums of money or valuables, to living in rural locations with long emergency response times, to holding high-profile offices. Though reserve law enforcement officers must apply for the permits, retired officers are by law allowed to carry concealed firearms as long as they maintain their proficiency certification.

“It sounds good on paper, but the chances of you using it are slim, and every time you carry it, you’re responsible for it,” Parkinson said, adding that after a number of years, some permit holders recognize they don’t need it and don’t seek a renewal. “There’s a big decrease because of the burden of it.”

Permits are good for two years, but Parkinson said his office will automatically revoke a permit should a carrier be arrested. An arrestee’s case is then evaluated, and the permit is either reinstated or revoked.

“If it’s someone making a mistake like a misdemeanor DUI and they didn’t have the gun on them, that’s one thing,” Parkinson said. “If it’s a violent crime, that means [the permit]’s not coming back.”

As for why there’s been a recent surge in applications, Parkinson said he could only speculate. And though the hard data suggests that more people are seeking concealed-carry permits, those who have them still represent less than one percent of the county population.

As nationwide debate over gun control rages on in the aftermath of the Sandy Hook Elementary School massacre in Newtown, Conn., National Rifle Association Associate Vice President Wayne LaPierre’s assertion that “the only thing that stops a bad guy with a gun is a good guy with a gun” has become a main talking point for more local governments to issue concealed weapons permits.

However, few local examples exist where that assertion rings true—at least when it comes to citizens. Parkinson said he could only recall one instance where a concealed weapon-carrying citizen stopped or prevented a crime. Almost two years ago, he said, a Santa Margarita resident caught a would-be burglar at his neighbor’s home and successfully held the man at bay until deputies arrived.

Chief Deputy District Attorney Jerret Gran similarly could only recall a single instance, when off-duty then-Chief DA investigator, Doug Odom—who, in January 1990, also famously defended his family against two home intruders—used his own concealed firearm to intervene in a crime in progress.

In March 2009, Los Osos resident and father Chris Saletta shot Nicole Galvez in his backyard after Galvez, 18 years old at the time, drove her Chrysler PT Cruiser through Saletta’s fence and into his backyard, driving over his children’s bicycles and trampoline. When Galvez allegedly ignored Saletta’s commands to stop, he shot through the passenger side window, striking Galvez in the arm. Galvez was later arrested on suspicion of DUI, and officials later concluded that Saletta lawfully discharged his firearm.

But Odom was a sworn member of law enforcement and Saletta didn’t have—or need—a concealed-carry permit to make the split-second decision he did. Other than that, there’s little to no local evidence that a gun in the hands of a citizen has prevented a crime.

But that hasn’t stopped advocate groups from calling for more lax standards toward getting a permit in SLO County. One such group, Cal Poly SLO Students for Concealed Carry, boasts 33 “Likes” on its Facebook page, though, according to Cal Poly Spokesman Matt Lazier, while students are allowed to carry a gun on campus if they possess a current concealed-carry permit, guns are never allowed in residence halls and cannot be stored anywhere on campus.

Achadjian was open with New Times in his reasoning for keeping his permit current. As a businessman—and “proud supporter of our Second Amendment rights,” he said—Achadjian first received his permit in the early ’80s, and carried the gun with him when he would move between his three business locations, making late-night trips to the bank for drop deposits and other tasks that had the potential for some degree of risk.

Years later when Achadjian entered public office as a county supervisor, he said, there were times when “everything was not so rosy” and rhetoric became heated.

“It gave me a sense of security,” Achadjian told New Times. Achadjian isn’t someone you would call a gun nut. Though he wouldn’t support any new laws further restricting access to firearms or complicating the process of lawfully procuring one, he is comfortable with the regulations already on the books in California, which he called some of the toughest in the nation.

Having gone through the process and passed hands-on proficiency tests every two years, he attested that the requirements to both secure and renew a permit are far more stringent than they were back in the ’80s.

Achadjian added that, as a public figure, he didn’t mind sharing the fact that he sometimes carries a gun.

“If I wanted to live in secrecy then I shouldn’t be in the business I’m in,” he said.