A dance studio with a 10-year history finds a home

In February of 2009 the city of San Luis Obispo lost its primary purveyor of ethnic and avante garde dance when World Rhythm and Motion Studio was forced to close its doors. After five years of renting the 4,000-square-foot space adjacent to the Greyhound station, the transportation giant had elected not to renew its lease, leaving the dance studio homeless for the third time in its 10-year existence.

Prior to the studio’s dislocation it was home to belly, Irish, Tahitian, and African dancers. The city’s own contemporary dance troupe, Variable Velocity, called the space home. Owners Jenna Mitchell—a belly dancer and teacher with a day job—and Keeth CrowHawk Hershman had invested tens of thousands of dollars in new lighting and danceable floors. Mitchell had mounted a 17-foot archway that was originally a prop in a Cal Poly production of Arabian Nights onto the wall. 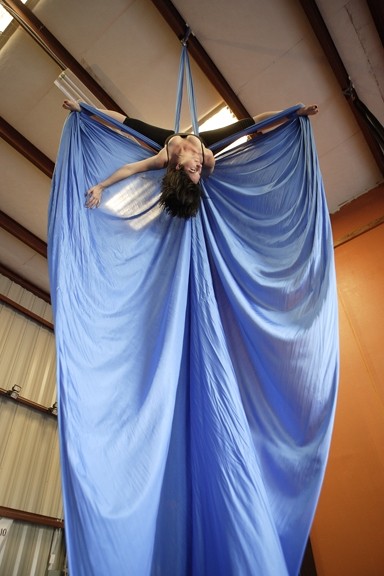 Though she was disheartened by the loss of her artistic home, Mitchell searched for alternatives. In September, she found one, a single-studio roll-top warehouse in an industrial park in south San Luis Obispo. She signed a one-year lease Sept. 31 and immediately launched a two-week effort to renovate the space, including painting over the drywall with a vibrant blue and orange and covering the cement floor with a foam-padded floor. She was five months pregnant at the time.

“Everyone was like ‘you are insane. You really want to do this again,’” she laughed, rocking a one-month old baby. The new studio reminds her of the space World Rhythm originally rented—a warehouse on Francis Street, considerably smaller than their last space at the Greyhound station.

“We had 4,000 square feet there and here we have 1,200. The nice thing about warehouses is you can make them what you need them to be. There’s pluses and minuses. At the old space we could have multiple classes, and we could do shows there. But it’s simple as far as running it, which kind of worked as far as having a baby and working full time.”

Without a lobby, dancers can either wait outside for a class to end, or sit inside the studio and watch a class conclude. The warehouse is difficult to locate, especially at night with very few streetlamps to illuminate the address. And not everyone returned to the new World Rhythm location. Some teachers, and dance companies, had already found a performance space elsewhere. Though there were certainly no hard feelings about the dispersion, Mitchell acknowledges that the separation was difficult to accept; she had gotten used to seeing certain people every day, and many of those people are no longer there. Core classes like belly dance—taught by several instructors including Mitchell and her dance partner Saundra Sarrouf, and hoop dance—taught by Laurie Hobbs of Fluid Luminescence—returned. But Mitchell is looking for more teachers, and genres of dance, to round out the studio’s offering, and help pay the rent.

After the last studio closed, Mitchell got in contact with a group of aerialists looking for a home. The aerial dancers, now comprised of four teachers collectively called Suspended Motion, needed high ceilings to rig their silks. The Greyhound station studio could not have accommodated this need, but the new World Rhythm studio could. The aerialists moved in and in addition to the Middle Eastern props and décor, large swaths of fabric are draped across the ceiling.

In spite of the drawbacks, Mitchell’s goals for the studio remain the same as they always have been: to provide a space for people to showcase and learn dance styles not easily found in San Luis Obispo, an isolated city that often comes across as a cultural whitewash. She’s especially hoping that the studio will inspire people to try something new and discover that it’s not as intimidating as they had once imagined.

“It’s still just a space for people to come and do stuff they can’t normally do other places. The regular places have their schedule filled with jazz and ballet. We’ll always be a home for the different ethnic and avante garde dance movement forms.”