Stephen Johnson directs this Australian film that opens in 1919 as sharpshooter Travis (Simon Baker) leads an operation that ends in the massacre of an extended Aboriginal family. Disgusted by his fellow soldiers' actions, Travis leaves the service, but not before rescuing a young Aboriginal boy he leaves at a missionary-run encampment. 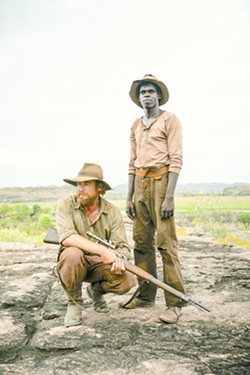 More than a decade later, a mob of Aboriginals led by Baywara (Sean Mununggurr) are attacking white settlements in retribution for the past massacre. Travis' old commanding officer, Moran (Jack Thompson), and the soldier actually responsible for starting the massacre, Eddy (Callan Mulvey), enlist Travis to stop the bloodshed by teaming with Gutjuk (Jacob Junior Nayinggul), the little boy he saved who's now a young man, to bring in Gutjuk's uncle, Baywara. It may be the only way to stop the slaughter of the rest of Gutjuk's family.

This morally ambiguous meat pie Western is beautifully filmed in the Northern Territory outback—a challenging, inhospitable land that's nonetheless visually stunning. It doesn't shy away from the ugliness of colonization, and Travis is a fascinating character who's struggling with his own culpability in the destruction of the Aboriginal way of life. Definitely worth a look if you're a fan of visceral Australian Westerns. (104 min.) Δ