A select brotherhood of foreign students in SLO is taking their schooling to new horizons.

On the outskirts of the SLO airport, amid the hangars full of privately owned â€œfixed-wingâ€? aircraft, youâ€™ll find what might be one of the areaâ€™s most unusual learning institutions. A fading yellow warehouse serves as its main campus, where students hole up in dark quarters six days a week, their noses in books, their heads somewhere in the clouds. The small, cramped classrooms are filled with manuals, computer screens, and maps, and model toys belie the seriousness of the studies that take place here. These students call themselves the â€œHeli-bros,â€? a motley fraternity of men who have come to SLO for one reason, and one reason only â€” to become helicopter pilots. 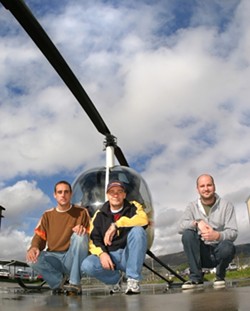 #For eleven years now, the Helipro Flight School has been training would-be pilots for the vertical lifestyle. The school is owned by Peter Stalhi, a Swiss Air pilot who does most of his advertising for the school in Europe, where poor weather conditions, high fuel costs, and tough air restrictions pose a greater challenge for Old World heli-hopefuls. Of course, the school welcomes students from all over, and locals always make up a smattering of the roll-call, but the foreign connection is unmistakable.

Walk into the Helipro building, and the first thing you notice is the thick cloud of cigarette smoke billowing from the Pall Malls favored by many of the budding pilots. Young Swiss, German, Austrian, and Japanese men make up most of the schoolâ€™s small student body, and thatâ€™s the second thing you notice â€” the accents.

English is spoken freely here, but it is almost everybodyâ€™s second language, so itâ€™s delivered with a lilt, a flair, and a laugh not often heard in these parts. Lots of hand signaling and bowing take place during every conversation, and occasionally frustrated students break into their native tongues in an attempt to get their points across, though they may never be entirely understood. In addition to the daily coursework of flight theory, navigation, machine maintenance, meteorology, and FAA procedures, many of the students are required to enroll in English-language classes as well. RenÃˆ Johl, a veteran fixed- and rotary-wing pilot who runs the school for Stahli, says this serves two purposes: One, all flight control here is conducted in English, so students must have a working knowledge of the language just to learn how to fly. And two, because most of the worldâ€™s helicopters are flown in North America and Australia, learning English ultimately assists them in gaining access to future employment opportunities.

Â But before they can work, they need to fly â€” a lot. It takes some 60 to 100 hours of flight time just to earn a private pilotâ€™s license. To become eligible for work at most commercial-level jobs, a pilot needs, at the very minimum, 1,000 hours in the air. That can, and usually does, take years, and tens of thousands of dollars to achieve. â€œItâ€™s like training to be a doctor,â€? says Johl, likening the time spent racking up hours for a pilotâ€™s license to the time a medical student puts into an internship. â€œYou have to be really committed in order to succeed in this field,â€? he says. â€œBut because most of our students have come a long way from home to be here, and theyâ€™ve already invested a lot of money acquiring visas and paying for their trips, they almost all finish.â€?
Â Gregor Milewski and Roland Ausdenblatten are the current flight instructors for Helipro, and as such are the big Heli-bros of the family, exuding a confidence that clearly separates them from the worried nervousness of some of the newer students.

They scoff at the suggestion that what they do is dangerous, saying self assuredly that accidents are always avoidable. Theyâ€™re both several hundreds of hours away from their advanced licenses, but theyâ€™ve gone through all the schoolâ€™s coursework and earned their basic commercial licenses, so now every time they take someone up in the air, be it a sightseeing tourist or a student learning how to fly, theyâ€™re racking up time toward their ultimate goal. But they donâ€™t care whom they go up with; they just love to fly, and they think helicopters are the greatest way to go.

â€œItâ€™s much cooler than an airplane,â€? Milewski explains in a crisp, matter-of-fact voice. â€œWe donâ€™t need a runway, we can hover, and we can land our aircraft in somebodyâ€™s backyard.
And itâ€™s much tougher to learn, a much more delicate operation. Maybe only the Space Shuttle is more difficult to learn,â€? he says, perhaps only half-joking.

Though bookwork and studying are essential to flight school, the most important lessons happen in the aircraft. Thatâ€™s where the pilot learns the complicated coordination it takes to keep a helicopter up in the air. The Beta R22 is a small, two-seater rotary wing aircraft, and it resembles a Geo Metro car fitted with a bent pinwheel on top. Helipro has three of these airborne classrooms. Theyâ€™re maneuvered by foot- and hand-bars that all work in tandem to maintain the aircraftâ€™s balance and motion. After a fifteen-minute pre-flight inspection and a brief explanation of what to expect when up in the air, the new students are ready to attempt their first lift-off. The engine roars, the blades spin, and gradually the crew gains distance from the ground, until in what seems like no time at all, theyâ€™ve reached the standard minimum height of 1,000 feet.

The ride in the Beta is surprisingly smooth, and the view of SLO below is remarkable. The volcanic hillsides glow a bright emerald green, colorful crops stretch across the valleys, and the clear, blue sky is a wide, open road. This is an ideal place to learn the art of helicopter piloting, with both great weather and rough terrain â€” perfect for practicing tricky landing techniques. But taking in the sights is the last thing on a beginning studentâ€™s mind.

It takes oneâ€™s full focus and concentration just to learn the tricks of this trade, a delicate and constant dance of pushing and pulling, giving and taking. Luckily the instructor is always ready to take over if thereâ€™s a false move, something that happens more than anybody would ever wish for. Little is learned during the first few hours of flight, except perhaps gaining an appreciation for how difficult â€” and maybe how totally cool â€” flying a helicopter might someday be.

In the meantime the Heli-bros will return to their crowded Helipro classrooms and continue to sharpen their skills, reading their charts, studying their manuals, and going up, up in the air. After all, learning this craft is what they all came here for. But Johl actually considers this the easiest part of the process. â€œAnybody can learn all the skills, that just takes practices. But a good pilot has to begin with the right attitude,â€? he says. â€œHe doesnâ€™t show off. Heâ€™s always safe. Thatâ€™s most important. Famous last words? â€˜Watch this.â€™â€? âˆ†

Staff Writer Alice Moss is afraid of heights. Help her down at amoss@newtimesslo.com.