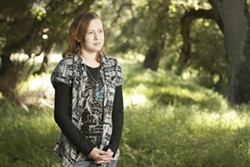 Grab your friends and join local teen Holly Navolt on Saturday, May 22 for a walk, jog, or run through the beautiful Huasna countryside.  Holly is an 18-year-old girl who suffers from cystic fibrosis, a degenerative disease. The benefit event will raise funds to support a surgery at Stanford Hospital to replace both of Navolt’s lungs. Though her medical insurance will pay for the procedure (she is second on the lung-transplant waiting list) the event donations will enable her family to stay with her during the operation and her three months of transitional care.

“Holly is an amazing, strong young woman who never complains.  She doesn’t even know if she will wake up from the transplant but has a positive attitude. Her outlook is such an inspiration,” said Amber Pinon, a relative. Holly was diagnosed with the disease when she was nine months old and her lungs have deteriorated to such an extent, they are at 30 percent function.  Her frequent lung infections are increasingly resistant to antibiotics.  Now she responds to just one type, an experimental drug requiring the family to sign a waiver. Navolt’s stepmother Christine stressed, “The transplant is really needed.  Otherwise, over time her lungs would become resistant to medications and she wouldn’t make it.”

Until recently, Navolt was ineligible for the transplant list: At 16 years old, she was so severely underweight (weighing only 68 pounds) she couldn’t be operated on. Three years ago, she moved from Arkansas where she lived with her mother, to California to live with her father and stepmother. Under a stricter medical regimen, Holly has grown to 106 pounds.

Cystic fibrosis is a common hereditary disease that affects the entire body but is especially damaging to the lungs.  The disease is caused by a mutation of a gene associated with regulating sweat, digestion, and mucus. Most people are born with two of those particular genes but with cystic fibrosis, neither gene works.  Symptoms include frequent lung infections that can be treated, but not cured, and complications affecting digestion. Holly’s lungs have a lot of scar tissue and she takes enzymes to aid digestion. After the transplant, Holly will still have the disease despite having new lungs.  It will take from five to 10 years before the new lungs are affected.

In addition to raising money, the Navolts hope the hike will spread awareness about cystic fibrosis.  “Lots of people don’t know about the disease, even though more people are discovering they have it.  People have been misdiagnosed with asthma or other conditions,” Christine said.  Although there’s been more discussion recently, a cure is yet to be found.

Holly’s family is looking forward to her having a better quality of life after the surgery. Her illness forced her to drop out of high school, and as Christine explained, “We are all looking forward to seeing her have the ability to lead a normal life: to go to college and get a job.”

There will be a barbeque after the hike, along with a bounce house, petting zoo, music, and prizes.  Join the walk/run/hike next Saturday at Tar Springs Ranch, 7255 Huasna Road in Arroyo Grande.  Registration on site begins at 8 a.m., the hike starts an hour later; or register online at cotaforhollyn.com. Registration costs $40. Sponsors who donate more than $500 will be honored on a banner.

The 21st annual Children’s Day in the Park takes place Saturday, May 15 at the Atascadero Lake Park from 11 a.m. to 3 p.m.  The event is free but a $5 wristband allows entry to the carnival area full of games and activities.  Performances by such groups as the Academy of Dance, American Karate, and Pacific Coast Gymnastics are scheduled throughout the day …

PathPoint, a nonprofit employment service representing adults with developmental disabilities, is sponsoring a voter registration drive and coincident nonpartisan reception for state and local politicians May 14 at 10 a.m. on the corner of Nelson and Short Streets in Old Town Arroyo Grande. Julie Rodewald, County Clerk-Recorder, will help residents register to vote.