Wait a moment—is this a cinema?”

Within moments of stepping onstage, British comedian Russell Brand realizes he’s been hoodwinked. The enormous screen behind him, the projection room, and the scent of popcorn wafting through the Fremont Theatre have totally blown its cover. Brand is performing in a movie theater, and not just any old movie theater, he observes, but one apparently located “inside of Jimi Hendrix’s synapses.” This is Brand’s appraisal of the Fremont’s (when one really stops to consider it, quite funkadelic) décor.

But Brand’s already come all the way to “San Luis—what’s that other word? Obiscopo?” on his Messiah Complex World Tour, incidentally also kicking off Otter Productions’ new stand-up comedy series at the Fremont (check otterproductionsinc.com for shows as they’re announced!), so it’s too late to turn back now.

“O-BIS-PO! O-BIS-PO!” someone in the audience hollers, raucously offering pronunciation assistance at the top of his lungs. Way to play it cool, guy.

After some technical fussing, a highly entertaining moment in and of itself (one of the mysteries of Brand is that people tend to turn bumbling and silly in his presence; in this case, the comedian’s request for the mic volume to be lowered is answered by a flurry of adjustments to almost everything else, by an unseen and presumably quite flustered techie). The show can begin.

Brand’s humor—fearless, dirty, self-effacing, and often gleefully lowbrow—belies a frightfully literate, even philosophical, mind. In his “Messiah Complex” routine, these parallel qualities are most striking. The myth, legend, and lore surrounding Gandhi, Che Guevara, Malcolm X, Jesus Christ, Hitler, and, parenthetically, Brand himself, are the show’s overarching theme. Why and how does society create false idols? How does martyrdom re-contextualize one’s life? In the midst of this brainy stuff—a lampooning of history, society, and the media’s overly simplistic treatment of these icons—we’re treated to anecdotes from Brand’s apparently bottomless treasure chest of comically mortifying situations, complete with a slide show. It’s like a TED talk, if the lecturer were prone to convulsions and giddy tangents on cunnilingus.

In need of a potty break (why did I sit in the middle of the row?) I hand over my notebook and pen to my comrade, Rochelle Turner. Rochelle takes this responsibility quite seriously, and when I return she has helpfully jotted down a few key pointers about Hitler and even snapped several clandestine photographs with my iPhone. (Thanks, comrade!) Did you guys know Hitler was a classmate of Wittgenstein? 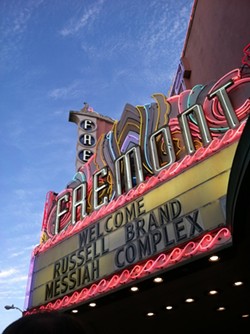 The crowd here is a mix of older and younger fans, and presumably a few poor souls on a date who had no earthly idea what they were getting into. Unfortunately, there seems to be a surprising number of idiots out tonight as well—though one might postulate that the idiot faction is simply the loudest, and thereby the best represented. Jesus, SLO Town! Is it a full moon or something?

One member of this faction—we’ll refer to him as the Fellow Countryman—will not stop shouting that he, too, is from England. Another—we’ll call her the Flattering Heckler—pipes up with compliments related to the subject matter at hand. “You’re better than Gandhi!” she cries as Brand discusses the Indian pacifist and leader of his country’s independence. Later, this gem: “You’re hotter than Jesus!”

San Luis Obispo seems to be making an impression on Brand as a rather badly behaved little town.

“Must be a lovely night out—from the zoo,” the comedian quips, once order has largely been restored.

Then we’re back to the show. Brand talks about how Guevara’s image and message has been re-appropriated to sell cars, and Gandhi’s to endorse Apple, because Gandhi would have loved to be the face of a company that exploited Chinese workers, driving them to commit suicide by jumping from the roof of a factory, then callously solved this problem by putting a net around the building. Certainly, this is what Gandhi meant when he said, “Be the change you wish to see in the world.”

As ever, I’m intrigued by Brand’s blend of intellectualism and schoolboy humor. “Messiah Complex” tackles thorny issues like homosexuality and the Bible, but isn’t above a pun about the second coming.

At the end of the show, the audience leaps to its feet, and Brand exits to Depeche Mode’s “Personal Jesus.” As the crowd disperses, several giddy girls make a run onto the stage to snatch the comedian’s notes, presumably to sell on eBay, or maybe just to sniff. A few folks linger hopefully, having heard rumors of a meet-and-greet, but this is not to be. Not with these crazies!