What have we learned?

As I climb a ladder to enter the B-17 near its nose, I first have to crawl on my knees through a small passageway. I turn around behind me and peer into the nose turret with its twin machine guns, then continue to crawl up and look back into the cramped cockpit, its instrument panel a jumble of dials, levers, and switches. Moving across a narrow gangplank, I enter the bomb bay, where up to 4,800 pounds of bombs could be carried, ready for dropping. 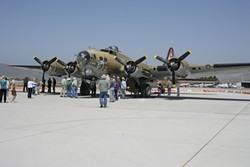 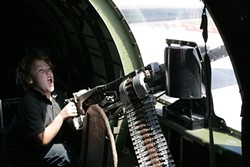 I’m in Nine-O-Nine of the 323rd Bomb Squadron of the 91st Bomb Group, a plane that completed 140 combat missions during World War II and never lost a crewman as a casualty. It’s now maintained by the Collings Foundation of Stow, Mass., which flies the plane and two others to 110 to 120 cities a year, offering the public a chance to see up close and personal what these war birds were like.

Right now, it’s silent inside the plane as I make my way past the radio operator’s station and then the ball turret on the underbelly of the plane. I try to imagine what it would be like to be in the plane with its four engines humming, the rattle of its un-pressurized cabin, and the noise of the machine guns fending off German fighter planes as we continue toward our target.

“No, I spent my time in a finance office,” he says.

Then she pulls out a book and shows a photo of her dad, a navigator on a B-17. Some of the people here are World War II vets, old men in their 80s. Some wear hats and jackets and pins that reflect their service; others, like my dad, are in normal street clothes. Some people, like the woman with the book, have a personal connection to these planes and the conflict they reflect. Others are just looky-loos like me, interested in these examples of living history. Some—like nine-year-old Jaden—are kids whose parents pulled them out of school for this rare opportunity to see and crawl inside these planes.

Jaden and I find ourselves in the B-17’s midsection, where a machine gun hangs out an opening in the window. Jaden grips the gun handles and pretends to shoot German fighter planes out of the sky, his face a scowl of concentration. Can he imagine what it might have been like for a scared 18-year-old kid breathing in engine fumes and gunpowder while German planes buzzed this bomb-filled beast, strafing it with bullets, the whole thing a deafening roar of four monster engines, the clack-a-clack of machine guns, the whistling wind through the open fuselage? Or is he imagining a first-person shooter videogame?

Jaden’s probably too young to understand the horror of war, to comprehend how the red mist of his videogame “kills” translates to real life … and real deaths.

The Army Air Force’s fleet of B-17s dropped more bombs than any other weapons system during World War II. Of the 1.5 million metric tons of bombs dropped on Germany by U.S. aircraft, the B-17s accounted for 640,000 tons.

Some of the B-17s were shot down, some crewman were killed by bullets from attacking planes, but these planes rained death upon both military and civilian targets during World War II, the so-called “War to End All Wars.” I wish. I pray Jaden never has to pull the trigger in real life. I hope death machines like this one will forever be ancient history in his mind. I pray we’ll learn our lesson soon.