Photos By Caleb Wiseblood HOGWARTS HOLIDAY One of the coolest things about visiting Universal Studios' Wizarding World of Harry Potter during the holiday season is getting to watch The Magic of Christmas at Hogwarts Castle—a spectacular fireworks and light show.

Find out more about Universal Studios' seasonal festivities at universalstudioshollywood.com. The park is located at 100 Universal City Plaza, Universal City.

No matter which acre of Universal Studios' 425 you're standing on, you're bound to be hearing something composed by John Williams playing in the background—whether it's Harry Potter fanfare or the Jurassic Park soundtrack.

There are a few exceptions here and there—depending on which themed area you're walking to, or what time of the year you're visiting the park. Danny Elfman's opening suite for The Simpsons can be heard year-round in the town of Springfield, while James Horner's score for How The Grinch Stole Christmas plays in—you guessed it—Whoville, a seasonal section of the park only erected during November and December, in celebration of "Grinchmas." 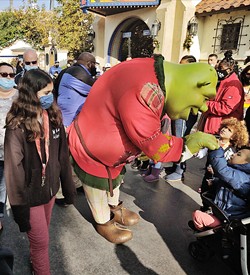 This part of the park operates as a town square-esque setting, complete with a communal Christmas tree lighting, which reoccurs every hour or so during the evening. The ceremony kicks off with an introductory speech from Whoville's mayor, Augustus Maywho (à la Jeffrey Tambor in Ron Howard's film adaptation, although he doesn't appear in Dr. Seuss' original book).

The first time I spot this shady Whoville official is much earlier in the day though, nearly right after entering the park. As surreal as it is to see one of my favorite underrated movie villains come to life, my wide-eyed gaze is swiftly stolen by a 7-foot-tall Shrek wearing a cute Christmas sweater, towering just around the corner.

That sentiment kind of sums up my recent holiday trip to Universal Studios—everything at the park seems to be competing for my attention. Springfield, where we stop to chow down on some burgers and chili dogs at Krusty Burger, is always a joy just to walk through and admire its quirky, reverential atmosphere, but its landscape is overshadowed by a nearby monument, only a few steps away, down a cobblestone road—the robust entrance to the Wizarding World of Harry Potter. Unlike the universe it's based on, we don't have to run through a magic wall to get to Platform 9 3/4, nor board a train or flying car to get to Hogwarts. Instead, we're forced to maneuver around dense crowds to get anywhere in this part of the park; the line for butter beer is just as lengthy as any of the rides' wait times. We pop into as many shops as we can, including Honeydukes, where we browse through the store's colorful candy assortments—we resist the temptation to buy too much, limiting ourselves to a couple of chocolate frogs. 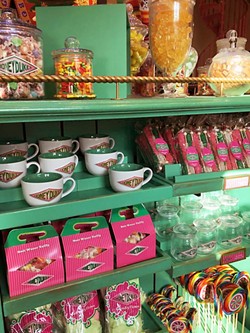 Rather than wait in the 85-minute line for Harry Potter and the Forbidden Journey—a magic broomstick ride of sorts inside Hogwarts Castle—we decide to explore alternative attractions, with the intention of returning to Hogwarts in the evening, right before closing time in hopes that the line will be much shorter. Luckily, we've got the Studio Tour, The Mummy, and Jurassic World (formerly Jurassic Park) to keep us muggles company in the meantime.

Waiting until about 8 p.m. to head back into the Potter-verse worked out perfectly, as we were able to enjoy The Magic of Christmas at Hogwarts Castle—a spectacular holiday fireworks and light show—just before stepping into the 15-minute line for the aforementioned Forbidden Journey with a churro and goblet of fire, er, I mean, cup of hot cocoa in hand. Δ