Hold it in or pay

The SLO Police Department is campaigning against what several groups see as a big problem downtown: public urination

With a belly full of beer and a bladder bursting with whiskey, Tony--a then 22-year-old San Luis Obispo college student who requested that his last name not be used--found a trash can and started to urinate near Bubble Gum Alley in downtown SLO.

In midstream, as steam rose from his drunken discharge on that midsummer night of 2007, Tony was confronted by a SLOPD officer and issued a $350 citation for public urination. A small amount of pee dribbled down his thigh as he prematurely zipped up, he said.

Stories like Tony's are a common tale in downtown SLO, but local 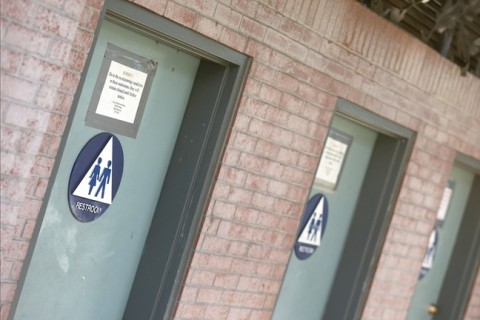 # business owners, attorneys, and police officers have all started to take serious action to combat what is considered by some to be a downplayed dilemma.

"It's a disgusting problem," said SLOPD spokesman, Capt. Dan Blanke. "And it happens so regularly here in town. It's something we will have to keep dealing with."

In an effort to clean up this problem--and the urine-stained streets that come along with it--SLOPD officials decided to launch an anti-public urination ad campaign to help remind bladder-bulging drunks that public walls do not magically turn into urinals--even after several cocktails.

According to Blanke, the soon-to-be-released ads are being designed to appeal to the student-age population--the demographic most often caught in the act. He added that most public urination offenses are alcohol related and are usually issued to male, barhopping college students.

"I actually caught a couple of guys standing shoulder to shoulder on the Victoria's Secret side of Higuera trying to pee in the crack of a doorway and trying to get urine inside the business," he said.

But it's not just males making this mess. Blanke added that both sexes are involved in this infraction of the law.

"We found a girl on Chorro Street squatting in front of Bull's Tavern," he said. "She complained that the bathroom line was too long. I understand people have to go to the bathroom, but they should have a plan."

If a person's plan is using public bathrooms provided by the city, however, he or she may be out of luck.

According to Jay Walter, the city of SLO public works director, all city-run bathrooms in downtown SLO are typically locked up before 5 p.m. Blanke said that a majority of the citations are issued after 10 p.m.

And the public bathrooms located on the corner of Marsh and Broad Streets have been closed indefinitely since the summer of 2006. The reason: repeated vandalism.

"Fixtures and toilets were being clogged with various items. Transients were hanging out and locking the doors for hours. Human excrement was used to graffiti," Walter said. "A very small percentage of people are the problem, but when they leave it in that kind of condition, it ruins it for everybody."

He added that the city doesn't have any additional bathrooms planned for downtown.

Some have suggested that the closure of the public bathrooms has had a direct correlation to the increase in people relieving themselves outside. The numbers of citations issued over the years tends to validate the theory.

According to Blanke, SLPOD officers issued 147 public urination citations in 2005. In 2006, the year the bathrooms on Broad Street were closed, the number skyrocketed to 219. Last year, the number fell to 187.

Despite the recent downward trickle in citations, at least one local lawyer has seen a rise in the amount of folks requesting legal help concerning this problem.

"I've noticed an increase in people asking for advice and representation on these cases," SLO-based attorney Lou Koory said. "I think the public has a perception of the San Luis Obispo Police Department spending a lot of time on the minor league drinking-related crimes."

But not everyone views peeing in public as an insignificant offense. One local downtown business owner says public urination in SLO is a very serious problem.

"Between urine and throw-up, we have a lot of problems," said Kimberly Stanier, owner of Contessa S. "A lot of mornings I come in and I have to clean it up."

Stanier's women's clothing store is sandwiched between some of SLO's busiest bars, and the location--the 700 block of Higuera Street--is in the middle of what some people have dubbed "pee alley."

"A lot of nights, people come out of the bars, lean on our doors, urinate on them, and the alarm goes off," Stanier said. "The police are called, and I have to go down there. It costs me a lot of money and time."

Despite the forthcoming campaign, Stanier said she doesn't foresee the problem being fixed anytime soon.

"I do love the college kids, but as long as we have them and homeless people here, I think it's going to be an issue," she said.

When Tony didn't pay his fine by the deadline, he said, and the court issued a warrant for his arrest, the urination incident became a major issue. He said he was taken into custody in November of 2007 after police pulled over a car he was a passenger in and ran the identification of everyone inside.

It led to a night in jail.

Next time, Tony said, he'll try harder to hold it.

*The year public bathrooms on Broad Street were closed.