You're in for quite a ride!

If you do anything for 20 years, you’re bound to get pretty good, and if you were already good when you started, you’re bound to become incredible, which explains ALO’s lush, vibrant fourth studio album Sounds Like This, a 10-song collection that highlights the band’s prowess on its members’ respective instruments, clever and immediately likeable compositions, and singer-keyboardist Zach Gill’s thoughtful lyrics.

Is it any wonder why Rolling Stone magazine recently named ALO (Animal Liberation Orchestra) as one of SXSW’s “25 Can’t-Miss Acts?” You probably also won’t be surprised to discover that Zach Gill is a member of Jack Johnson’s own band. As good as this new record is, the best way to experience ALO and see the amazing on-stage interaction is to go to a live show, so head down to SLO Brew on Thursday, Aug. 9 (7:30 p.m.; 21-and-older; $20 presale or $23 at the door), and ride the ALO bandwagon … because it’s a helluva enjoyable ride! Paula Fuga & Mike Love Trio open the show.

On Friday, Aug. 10, SLO Brew brings back reggae-R&B-rock act One Drop (7:30 p.m.; all ages; $10) with opening act Peter Goetz and a screening of the film Sophia. It’s like being at the beach except you’re in a nightclub.

The always-entertaining, horn-filled Afro-beat dance band Antibalas returns to the club on Saturday, Aug. 11 (7 p.m.; 21-and-older; $12 presale or $14 at the door), with DJ Malik Miko Thorne kicking off the evening. I triple dog dare you not to dance!

Then on Wednesday, Aug. 15, check out The Be Good Tanyas (8 p.m.; 21-and-older; $18 presale or $20 at the door), a trio of nostalgia-minded Americana gals on mandolin and banjo playing gorgeous tunes with three-part vocal harmonies.

And don’t forget to buy your tickets for Jeff Bridges & the Abiders, who play two shows on Thursday, Aug. 23 (5:15 and 9 p.m.; 21-and-older; $40 presale or $45 at the door … if any are left). I wouldn’t wait too much longer to secure your tickets for this one, folks. After Bridges’ Oscar-winning performance as Bad Blake in Crazy Heart, where he sang the Oscar-winning Best Original Song, “The Weary Kind” (written by Ryan Bingham and T-Bone Burnett), people have been clamoring for live performances. Visit ticketweb.com for this and all SLO Brew presale tickets.

A quarter century of Peppino!

When Peppino D’Agostino—whom Acoustic Guitar magazine has called “one of the most capable composers among fingerstyle guitarists”—plays two weekend SLOfolks concerts, it will mark the 25th year he’s played for our local acoustic music society.

D’Agostino is a true poet on the guitar, playing deftly and assuredly while occasionally singing in English or Italian. He’s one of those players who simply amazes with his skills, which have garnered him numerous awards over the years.

Congrats to D’Agostino and SLOfolks on 25 years of musical excellence!

Her incredible voice, songwriting skills, and charming stage presence aside, the best thing about Inga Swearingen is her sweet nature. It comes across in everything she does. She’s just so darn nice! And she should have a big head! I mean, she’s got a couple music degrees under her belt, she won first place in the first-ever Montreux Jazz Festival Shure Vocal Competition, and she’s appeared on Garrison Keillor’s Prairie Home Companion broadcasts and concerts. She’s an internationally acclaimed vocalist who happens to live right here in SLO County. 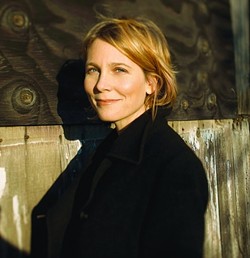 On Sunday, Aug. 12, Inga Swearingen and the Real Time Jazz Group will perform in concert from 2 to 4:30 p.m. at St. Benedict’s Church in Los Osos.

Her backing band is certainly up to the task, as their names should be familiar to anyone who follows the local jazz scene: percussionist Darrell Voss, guitarist Jeff Miley, saxophonist Dave Becker, and bassist Dylan Johnson.

Admission for this 15th annual fundraising concert is still just $25, and includes gourmet wine, soft drinks, and food. Buy tickets at Boo Boo Records in SLO, the Abundance Shop in Los Osos, or by calling 471-6759. Proceeds will benefit the ministries of St. Benedict’s.

Steve Key’s Songwriters at Play showcases have a full lineup for you starting on Thursday, Aug. 9, with Chi McClean at the SLO Down Pub (6:30 p.m.; all ages; pass the hat). According to press materials, “McClean writes acoustic rock songs in the style of Jimi Hendrix, the Black Crowes, Free, the Faces, and the Allman Brothers.” Spanky Baldwin, Holly Ann Phillips, and Matthew White of the Ballistic Cats will also perform four-song sets.

Kiki Ebsen is also the headliner for the Sculpterra Winery showcase on Sunday, Aug. 12 (1 p.m.; all ages; pass the hat). She’s touring to support The Beauty Inside, her first album of original material in five years, and her fourth album over all. Diane Arkenstone, Gayle Skidmore, and Matt Curreri will also play four-song sets.

The week’s showcases ends on Tuesday, Aug. 14, with Alicia Murphy at Kreuzberg (6:30 p.m.; all ages; pass the hat). Murphy, a 20-year-old singer from the Southern California harbor town of San Pedro, is currently studying hydrology at UC Davis. Her music is supposed to sound like songs from the Juno soundtrack! Moldy Peaches! Cool. China Simms of Modern Afternoon is a guest performer.

I learned something new today. A Viola da Gamba is a stringed and bowed instrument that dates to the time of Shakespeare and is used primarily in Renaissance and Baroque period music. The one I saw on Youtube had seven strings (!?!) and was about the size of a cello, but it has frets. Anyway, if you want to see some live viol (as it’s called for short) music, head to the SLO Odd Fellows Hall on Friday, Aug. 10, at 7:30 p.m. Melita Denny will present the music of composers Orlando Gibbons, John Jenkins, Henry Purcell, Marin Marais, and more in this free concert (donations accepted)!

Chick Tuesday claims to sing “sweet dulcet harmonies,” and since the band contains Sharon “Buffy” Doran, I’m apt to believe it. Buffy’s an awesome singer and works with other awesome musicians, so I figure her bandmates Sarah Jane Weiss and Karen Wilkins must be pretty good, too. You can see for yourself from 8 to 10 p.m. on Friday, Aug. 10, at Linnaea’s Café. According to Wilkins, they sing “everything from gospel, to folk, to ‘summer of love’ classics and will have you reminiscing if not singing along.”

D’Anbino is host to Kimberly Ford & Steve McCann with The QuieT Knights on Friday, Aug. 10, from 8 to 10:30 p.m. Ford has been featured at jazz festivals throughout the United States and is also included in the consummate book on jazz singers titled The Jazz Singers, written by jazz critic Scott Janow. McCann, known as the “Voice of the Central Coast,” has performed live with the London Symphony Orchestra. Admission is $10 ($5 for Record Club members).

Johnee Gange wrote to tell me about a concert on Saturday, Aug. 11, from 7 to 9 p.m.: “I’m playing tabla for a cool concert at mBody yoga next weekend with PremaSOUL (from L.A.) featuring the divine singing of Sheela Bringi. I’m surfing fine waves in Cabo this week, so don’t have much more info than this link: mbodyslo.com/events/concerts.” Tickets are $20 online, $25 at the door. Seating is limited! This will be PremSOUL’s third annual visit to mBody.

Master jazz pianist Terry Trotter is the next attraction at the Famous Jazz Artist Series at the D’Anbino Wine Tasting Room on Sunday, Aug. 12, at 4 and 7:15 p.m. Each show costs $15 (call 927-0567). Trotter’s credits include work with Lena Horne, Frank Sinatra, Natalie Cole, Stan Getz, Chet Baker, and Joe Pass, among others. For this engagement, he’ll be performing a solo piano recital, but with series co-producers Charlie and Sandi Shoemake (vibraphone and vocals) joining him for a few selections.

San Francisco’s Fat Opie will roll through town to play three shows in support of its fifth full length CD Victoryville. If their video for “Head’s Too Small” is any indication, this is a stripped-down duo with banjo-playing singer-songwriter Scott Mickelson playing with drummer Dave Tavel. The music has been described as “Jeff Tweedy and Thom Yorke had a baby and named it Mumford.” See them on Tuesday, Aug. 14, at Linnaea’s Café and Saturday, Aug. 18, at Boo Boo Records at 5:30 p.m. followed by a show at Kreuzberg.

Get some free music!

Damn Handsome and the Birthday Suits kick off their new promotional EP with “Incredibles,” a track that strikes musical gold with the same infectious stomp and roll of Wall of Voodoo’s “Mexican Radio.”

That particular track will remind some listeners of Adam Ant.

Other lyrics aren’t quite so obtuse, like this verse from “Days”: Side effects are generally mild/ Shit your pants once in awhile/ They got you hanging by a string/ But don’t ya know that don’t mean a thing.

The four-song EP ends with a lickity-split Oingo Boingo-esque romp called “Angels”: I microwave cold turkey/ And lip sync my way through life/ Angels get torn and dirty/ I’m goin’ drunk on this strife.

It’s a fun little sampler drawing material from the group’s full length CD Decapitate the People for the Government, and the EP is free while supplies last at Boo Boo Records.