Sharon Holland spoke quietly into a nest of microphones in the hope that her son might be remembered for more than the way he died.

"Andrew was more than an inmate. He was more than a man that had a brain disease. He was bright and funny. He was a loving son," she said. "He would give the shirt off his back to anyone, and he often did." 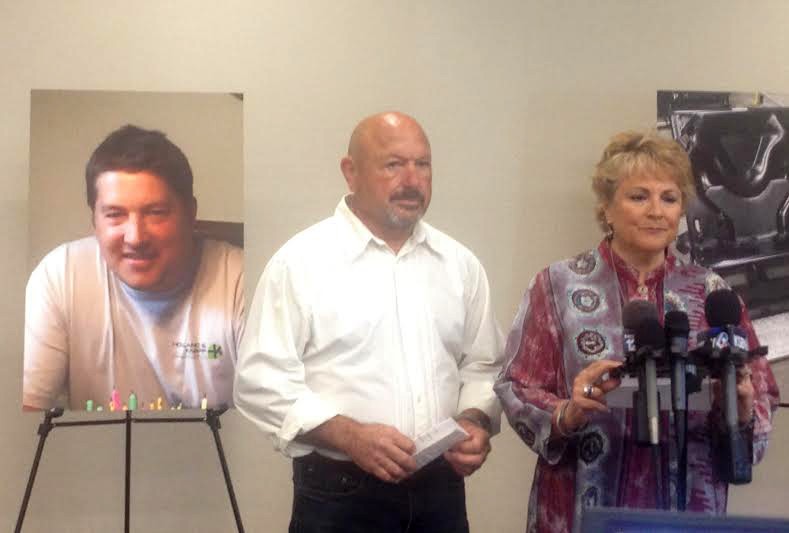 Sharon appeared with her husband Carty at a press conference in Atascadero on July 27, just hours after SLO County announced it had agreed to a $5 million settlement in connection with the death of the couple's 36-year-old son Andrew in the SLO County Jail more than six months ago.

Andrew Holland, a diagnosed schizophrenic, was found unresponsive in one of the jail's observation cells on Jan. 22. He died less than an hour after he was released from a restraint chair, where he'd been placed after correctional deputies witnessed him attempting to harm himself, according to a coroner's report. Holland remained in the restraint chair for 46 hours prior his death, the report stated. Holland died from a clot in an artery in his right lung, and his death was ruled as "natural" by a medical examiner. The Holland family and their attorney disputed the findings, insisting that the blood clot was caused by Holland's extended time in the chair.

Holland's death sparked public outcry and drew attention to several issues at the jail, including the treatment of mentally ill inmates, the use of the restraint chair, and the long waits many of the mentally ill inmates faced to get transferred to a county or state mental health facility. Holland himself had been waiting 12 days for a transfer at the time of his death.

"The conditions that [Holland] experienced in the last 48 hours of his life was horrific," said Paula Canny, the attorney representing the Holland family. "People would be horrified if that [happened in] Guantanamo. This is San Luis Obispo County. This is Oprah's happiest place in the world. When something this horrible happens here, something is terribly wrong."

The Hollands said they plan to use the money from the settlement with the county to create nonprofit organization called the Andrew Holland Foundation, which will work with mentally ill individuals in the criminal justice system and their families. Holland's parents said they wanted to provide meaningful help and support, and advocate for change at the local, state, and even national levels.

"No one else should ever have to die the way our son died," Andrew's father Carty said.

In addition to the monetary settlement, the county also said it implemented a number of changes at the jail, including suspending the use of the restraint chair and updating its restraint policies. The county also said it had changed protocols at county Health Agency to ensure that its psychiatric health facility can "promptly" accept mentally ill inmates who are a danger to themselves, added dedicated supervision for the mentally and medically ill inmates, and increased communication between the county Health Agency and the SLO County Sheriff's Office.

"The Sheriff's Office recognizes the tragedy of this situation and we are committed to working with the Health Agency to ensure something like this does not happen again," SLO County Sheriff Parkinson said in a written statement released by the county.

Holland's parents said they were "cautiously hopeful" that the county would make good on the reforms and follow through on its promises. Their doubts appeared to rest with Parkinson, whom they called on to resign over his handling of their son's death.

"I think the manly thing for him to do is resign," Carty said.

Andrew's mother Sharon shared a similar sentiment, indicating that county residents should vote Parkinson out of office should he fail to step down.

"We need someone who knows and cares about more than political expediency," she said.

"Sheriff Parkinson is as saddened as anyone over the death of Andrew Holland," Neal wrote. "He is focused and directing his energy to assure that changes and improvements continue to be made so that this type of incident doesn't happen again."

If he chooses to run for another term, Parkinson will be up for reelection in 2018.

As the Holland family attempts to move forward, the FBI is conducting an investigation into deaths at the jail. A spokesperson from the FBI's Los Angeles field office confirmed that the bureau has an open civil rights investigation into the matter and that findings or violations would be forwarded to the U.S. Department of Justice's Civil Rights Division. That investigation began in spring of this year, according to the FBI. Δ