The family of Andrew Holland announced its endorsement of 4th District San Luis Obispo County Supervisor candidate Jimmy Paulding on April 4, also revealing themselves as the source of a $40,000 anonymous donation to his campaign last month. 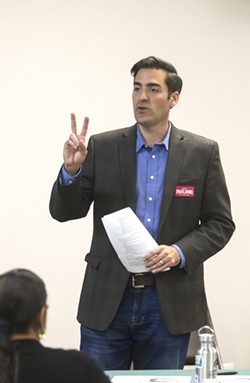 "The Holland Family Alliance, in our continued pursuit of honest, clear-eyed partnerships with candidates dedicated to restoring transparency and accountability to county government, is proud to endorse Jimmy Paulding," the family's press release stated. "It is time the Holland Family publicly announced that we were the donors who anonymously matched a $40,000 fundraising effort for Jimmy Paulding."

The Hollands started the Holland Family Alliance after reaching a $5 million settlement with SLO County over Andrew's death in county jail last year, which occurred after he was kept in a restraint chair for 46 hours. The family has now endorsed and donated to the campaigns of county sheriff candidate Greg Clayton, district attorney candidate Judge Mike Cummins, and Paulding.

"The way our elected officials, including the Board of Supervisors, handled the tragic death of Andrew Holland is deeply disturbing," the Hollands' statement read. "We need elected officials who are accountable to the people, take responsibility for their actions, and will not mislead the public."