Violinist Bette Byers spent decades in Hollywood playing music for countless films and TV shows, backing performers such as Nat King Cole, Elvis Presley, Billy Eckstine, Marvin Gaye, The Supremes, Tom Jones ... the list would take up the whole page! She started her training at age 4, and by 18 she was a professional musician. Now in her mid-80s, she "retired" to Santa Maria a few years ago, but like a true artist, she can't stop playing with her group The Candlelight Strings or stop creating. Her new record is Ragtime Musicale: Music For Silent Films, available on cdbaby.com.

"We played behind the film festival's silent film night a few years ago—Buster Keaton and Charlie Chaplin films—and I got all this music together," Byers, also a composer and arranger, explained. "I had music leftover and thought, 'Why not make a '30s album?'"

Inspired by the sounds of the '30s and '40s, the 12-song collection is absolutely fantastic! The compositions are lively, and you can't help imagining a black and white silent film playing out before you as you listen. The sparkling string work is punctuated by comedic percussion by Salvador Garza, who also plays violin on a few tracks, and the songs are as fun as their names: "Inebriated on Stormy Seas," "Pandemic Rag," "Dancey Schromancy and Schmaltzy," "Fisticuffs, Snake Chase," and the final track, "Not Another Rag?!"

On April 12, Byers gathered her players at The Odd Fellows Hall in SLO to record a few of the album's tracks over a green screen to make music videos "to put on TikTok or someplace," Byers said offhandedly.

Spry and diminutive, she's a big personality who's seen a lot. When I asked what would appear behind them in the videos, she didn't know, but watching "a string quartet sitting in a circle playing is boring," she said flippantly. Byers is unflappable—exactly how you'd hope an octogenarian who spent a lifetime among Hollywood's glitterati would be.

Even director Lui Segui wasn't sure what he was going to put behind the players, but everyone was dressed in vaguely '30s style, including three dancers dressed like flappers. When the videos are released, I'll let you know. In the meantime, head to cdbaby.com and check out this terrific new record. If you prefer a physical CD, email stringrus@gmail.com. 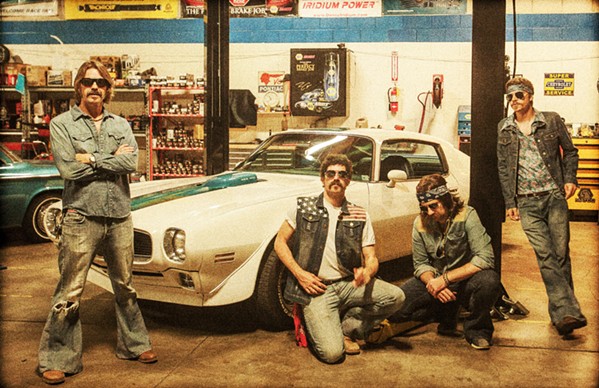 SLO Brew Rock has Pacific Range playing on Friday, April 16, at 6:30 p.m. If you're a fan of The Allman Brothers, Grateful Dead, or The Band, you'll dig them. Truth About Seafood (TAS) plays Saturday, April 17, at 6:30 p.m. Do you like bitchin' rock 'n' roll played by dudes who wear headbands and shit? This is your band.

"I guess they can host 60 people—10 percent of their 600 capacity—in the event center, spaced out seated, and the rest will party outside with the video/audio production out there," bassist Brad Daane explained. "The official rules they want to advertise are no dancing, you must stay seated, and masks on when not in your seat."

No dancing at a TAS show? Good luck!

The Famous Jazz Artist Series is back for another round at The Harmony Café in Cambria this Sunday, April 18 (5:30 to 7:30 p.m.; $20 admission and $10 minimum food or beverage order; reserve your spot at (805) 935-9007 or charlie@talsanmusic.com). This week expect Brazilian jazz with Charlie (vibraphone) and Sandi (voice) Shoemake, Rich Severson (guitar), Dylan Johnson (bass), and Darrell Voss (percussion).

"During the lockdown, there were few safe places to go," chief songwriter Wendy Liepman said. "Some weekdays, Bob and I would go early to Shell Beach during low tide. While he surf-matted, I took long walks on empty beaches, watching the pelicans fly and the white sea foam spilling upon the shore."

Those moments inspired this imagistic song: "Pelicans fly over waves of alabaster/ Beach is empty everyone's gone home/ Tide begins to rise I am walking slow then faster/ White chiffon and lace upon the foam/ Time out of time this time is mine/ Time to let troubles unwind/ Wind in my hair ocean air/ Open whatever I find."

I'm loving these gorgeous tunes, and there are six more to go before I can soak in the collection in its entirety. Sweet torture!

It's been a while since The SLO Record Swap offered a place for vinyl record fiends to indulged their addiction, but starting Sunday, April 18, from 8 a.m. till noon, it will be back every month on the third Sunday in the parking lot behind Traffic Records and The Raconteur Room.

"The overarching goal here is to really show how vibrant and wonderful our Traffic Way business community is," Traffic Records' Manuel Barba said. "We have weathered the storm of 2020 and have emerged healthier and stronger than before. Our block is amazing. Atascadero is an open-container community, so one can legally enjoy libations and beverages on the sidewalk."