Home again: A glimpse of the final days of the De Groot Nursing Home for Children

In a lot of ways, Sjany de Groot is back where she was more than 30 years ago, when she and her husband began caring for sick children when they left Holland after the war. 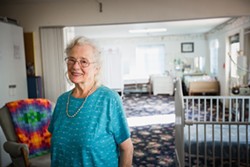 There was a restrained sadness beneath those words, however.

The De Groot Nursing Home for Children is noticeably emptier these days. All the children were still present on a recent visit, but the last of the paid nurses had been let go.

Two of the children were just days away from being transferred to other facilities, though de Groot declined to say where. After forfeiting her license to bill Medicaid, following a roughly 100-page report and long list of violations from the California Department of Public Health, de Groot was able to keep only three of the children for whom she’s a legal guardian. The house is still filled with beds, nearly all of which are empty. De Groot said she’ll do some reorganizing, maybe create a space for house guests to sleep, but will keep the beds just in case, for “people that need it.”

The only remaining nurse, Susan de Groot, flicked on a TV and began playing the movie, Elmo’s Christmas Countdown. She said the children had been watching it nonstop for days.

“It’s driving me crazy,” she joked.

Across the room a small boy began crying. He was one of the two children who would be transferred out of the house just days later. Susan ran to him and stroked his head.

De Groot turned to New Times: “The little guy, I feel sorry because he is very sick.”

But she no longer worries that government officials will come to the house in the middle of the night to take the children, and she’s no longer concerned with meeting the state’s required fixes.

“I said keep it,” de Groot said about the funding she previously received. “Stay out of my house.”

Though she can no longer bill for services, de Groot said she’d continue to care for any children brought to her home. As she said so, the sounds of “The Ants Go Marching” started playing through speakers placed throughout the house.

“It will never be the end,” de Groot said. “We will always be here.”