Typically, surgeries call for an overnight stay in a fluorescent-lit room far from the comforts of the patient's familiar sheets and warm blankets. Dr. William Sima, a Templeton-based orthopedic doctor and sports medicine specialist practicing for more than two decades, is getting rid of the expected overnight stay for his patients.

In the past year, Sima's performed more than 100 outpatient total hip replacements, total knee replacements, "uni-knee" replacements, and shoulder and ankle replacements. This outpatient anterior method allows the doctor to give his patients the option of going home just a few hours after the surgical procedure.

He calls the model "home by dinner"—although now he said he can have patients home by lunchtime, in some cases.

"I can tell you this, you're not going to be laying next to your neighbor watching TV. You're going to go home," Sima said. 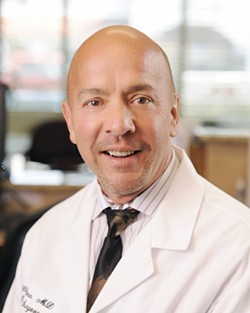 Much of the success of this method has to do with the preparation Sima and his team does before the patient arrives and after the surgery is completed.

He coordinates with his team of nurses, other assistants, anesthesiologists, and a physical therapist. Having a team that he's constantly working with and is familiar with gives Sima the upper hand when helping his patients.

The doctor prefers to give his patients options when it comes to choosing a method of aiding their joint pain, but Sima said he doesn't push surgery on his patients if it's not the route they want to take. To him, this method is not only beneficial for his patients, it's cost effective because a patient doesn't have to worry about the extra cost of staying in a hospital overnight.

The doctor's total hip replacement procedure is done from the front of the body, which allows for a fast recovery and less pain.

"Everything about it has been better as far as recovery, position of the implant going in, and reduced pain. I've probably done a thousand replacements going through the back, and I haven't done one that way for the past eight to 10 years," he said.

There's less pain after the procedure because the muscle tissue is not affected during the surgery; in traditional hip replacement surgery, muscle tissue can be damaged. Since the incision is at the front of the body, the patient won't be sitting on the wound site.

Dennis Mucciacito, a patient of Dr. Sima, had total hip replacement in late June, and July 10 was his last day of physical therapy exercises.

"I can tell you that when I went in this time it was probably about four years since I'd seen Dr. Sima last, and I was really having trouble with my hip at the time," he said.

Mucciacito grew up in Ventura and played various sports in high school and college, so he was a regular at his doctor. When he moved to Atascadero, he started playing in an adult league softball team.

"I started complaining about my knee, and I was referred to Sima because I was told he was a sports doctor," he said. "When you first meet him you can tell he knows what he's talking about, and he makes you feel comfortable."

Naturally, Mucciactio returned to Dr. Sima again when he needed hip replacement surgery. The procedure was a positive experience for him—from the morning exam, preparation for surgery, to waking up about 90 minutes later.

"His entire staff makes you feel so positive about every step you're making, and he makes you aware of all the positives of the procedure. With all that understanding, the benefits of the procedure for me it's been life changing," he said.

For more information about Dr. Sima and his services, visit williamsima.com.

The Cuesta College Rodeo Club Men's Team ranks fourth in the nation and first in California. The club recently competed in Casper, Wyoming, at the College National Finals Rodeo on June 10 through 16. Student athlete Will Centoni topped the nation in both bull riding and the men's all-around competition. Six Rodeo Club student athletes participated. Δ