Home on the water: One family lives in Port San Luis Harbor but a rent increase is moving them out

When the Rider family first came to the Central Coast in 2011, CC Rider, his wife, and two younger daughters walked into Ross in downtown San Luis Obispo.

"The girls were wobbling all over the place, and we had to hold onto things in the store; it was pretty funny," Rider said. 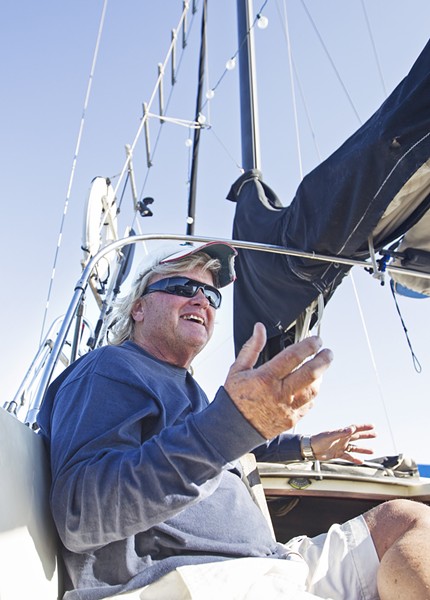 The family had been on their 30-foot boat Tiki, traveling for several days from a harbor in San Diego to Port San Luis. They set sail in the hopes of making a home out of the Port San Luis Harbor, which they did for five years. But a new live-aboard fee, a fee allowing occupants to live on their boat in harbors, is causing the only family in the port to set their sights on another harbor.

The family of four plus their feline companion decided on an alternative way of living before they left San Diego. They lived in a country club home in Southern California for a few years, but that wasn't the lifestyle they wanted.

"All those rules and stuff, it just wasn't for us. My wife and I love the water, and we both surf," Rider said.

Every morning, Rider and his two girls wake up at 5 a.m. to start their day.

Rider takes his daughters to shore and drives them 2 miles to the bus stop; the oldest spends her day at San Luis Obispo High School and the other goes to Bellevue-Santa Fe Charter School. Rider does handy-work, and his wife works at a local shop.

In 2011, when Rider purchased a mooring to stay in the harbor, they received a letter from the former interim harbor patrol officer, John Lowry. He notified the family about the weather conditions that affect the boating community.

According to the letter, Port San Luis is protected by a breakwater, a barrier that's built out into a body of water to protect a coast or harbor from the force of waves. But the breakwater doesn't offer protection from the strong winds and swells that occur during winter storms.

"The combination of both strong southerly winds and large swells in the harbor result in an average of two boats a year going aground, resulting in complete property loss," the letter stated.

In the letter, Lowry also said that based on his experience and knowledge of the port, "I strongly advise you to reconsider purchasing a mooring in Port San Luis with the intention of living aboard your vessel full time."

"Living aboard your vessel in Port San Luis could put your family at risk of injury," the letter further stated.

But the warning didn't stop the Rider family from dropping anchor.

"When a storm is going to come in, we usually know ahead of time, and we just stay in a motel or go camping, depending on what's going on," Rider said.

But the cost of mooring in the port is about to change. According to the mooring and water use regulations, boaters only had to pay $31 to $45 a month depending on the size of the boat. However, on June 27, the Port San Luis Harbor Commission adopted an update to those regulations. Starting in January, boat occupants will now have to pay $250 per month. The fee includes the use of the water taxi, staff assisted pump-out, one parking spot, the use of the showers, laundry, trash, water, and work dock utilities.

"One of the things we did with the mooring ordinance is we had over 10 public meetings to get input before it was publicly noticed as public hearing," Luker said.

She said the district put a lot of thought into the policy because of the time it spent working with the community.

But to Rider, it's more than just about a fees increase. He said he doesn't feel welcome in the Port San Luis Harbor community.

Luker told New Times that the policy change wasn't aimed at anyone specifically; the district has four other potential occupants who are looking to live on their boats.

"Once the district came to a decision and passed the policy in June, the district made a conscious decision to not implement it until January," she said.

"We definitely value the live-aboards in the bay. They help us out a lot by reporting emergency situations," Kelly said. "They have their eyes on everything that goes on out there, and it's great."

Occupants need to obtain a two-year permit to live in the Morro Bay Harbor. The permit costs $170. Similar to Port San Luis, the boat would need to undergo an inspection, has to be operational, and must be registered to the occupant looking to live aboard the vessel.

"The boat can't be rented out; you have to be the registered owner. It demonstrates that you have a vested interest in the boat and want a permanent place to keep the boat," Kelly said.

On top of purchasing the mooring for the boat, which costs roughly $25,000, an occupant must pay the city of Morro Bay $80 a month.

Occupants must also pay a monthly fee that's similar to a utility bill. It covers trash, showers, maintaining the parking area nearby, and filling holding tanks with water. That costs $16.91.

"A lot of people do it [live on a boat] because they love boating and the ocean," Kelly said. "It's an escape from the land life, and it can be cheaper than living on land."

Rider and his family are weighing their options, but they're leaning toward navigating into the Morro Bay Harbor.

"Really, I would like to stick around because of the girls, one is going on to her senior year in high school," Rider said. "But why stay where you aren't wanted?" Δ