He says they wrecked his trees; they say they've got a duty to protect the public from fire hazards

On the morning of Sept. 25, a familiar battle was waged in the outskirts of Atascadero, but this time, the skirmish between corporate behemoth Pacific Gas and Electric Company and property owner Joseph Hafler reached new levels. 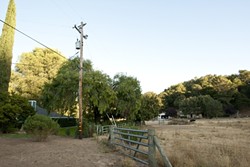 According to Hafler, a work crew from PG&E stormed onto his property on Bolsa Road against his will, butchered several trees, and left a mess of trimmings for him to clean up. Officers from the Atascadero Police Department responded to the situation, but Hafler said they dismissed his concerns and even cut the locks on his gate, allowing PG&E to enter.

“The police should be protecting my rights, not theirs,” Hafler said.

Watch Commander Joe Allen was at the scene, and when he described the events to New Times over the phone, he was audibly frustrated. He denied cutting the lock but confirmed that officers stood by and allowed the workers to access Hafler’s property.

“We were out there to keep the peace and keep [PG&E workers] from getting hurt,” Allen said. “Every year, they go through this same scenario.”

One of the utility company’s many electrical lines runs through Hafler’s property—and has since the 1930s, when a 110-volt line was installed to power the pump on a small well that’s no longer in use. At the time, no formal easement was drafted to give PG&E any rights to breach the property, maintain the line, or remove obstructions, but the historical use established a prescriptive easement, which is legalese for a binding gentleman’s agreement. Because PG&E was allowed to use the land for so long, the company could claim a legal right to do so in the future.

Hafler had no qualms with any of that, but he complained that the utility company took unfair and un-agreed upon advantage of the easement decades later, when they swapped out the measly 110-volt line for a higher-powered 440 cable that now feeds about a half dozen homes in the area. The new line could have easily been relocated along the street, Hafler said, or even run through a mostly vacant pasture on the 5 1/2-acre property, but the power lines continue to run right past his home, cutting a path through trees that could be beautiful shade providers if they weren’t hacked down every year.

It should be noted that Hafler bought the property in 1989, years after neighborhood development had taken place and the power lines had been upgraded. 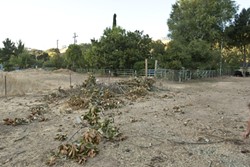 He said he sought legal advice on the matter and was told it would be too costly to take to court. Based on a brief description of the conflict, Roy Ogden, a local attorney who specializes in land-use disputes, agreed. He told New Times that the situation raises several complicated legal issues and that Hafler might have a case, but winning wouldn’t be easy.

“He could spend a lot of money and not get anywhere,” Ogden said. “It can be very challenging to take on PG&E. They’re the 500-pound gorilla.”

According to 2011 financial reports, the company has an operating budget of nearly $15 billion, giving it plenty to throw around in court. Instead of fighting the company in superior court over the location of the lines, Ogden said Hafler would stand a better chance pursuing the company for damages to the trees in small claims court—if he can get an arborist to testify that the trim job was overreaching and poorly done.

In an effort to reduce fire hazards, the California Public Resources Code requires utility companies to monitor vegetation near power lines and maintain minimum clearances or be subject to fines of up to $2,000. A four-foot clearance is required for lines operating at 2,400 volts, but section 4296 exempts distribution lines carrying 750 volts or less, like the one on Hafler’s property. He said the prescriptive easement calls for a 15-foot clearance and that PG&E has gone far beyond that. 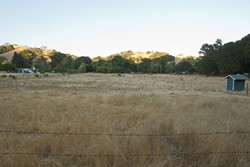 Denny Boyles, a spokesman for PG&E, said that the company frequently pays landowners to remove trees and plant replacements in areas that won’t threaten the safety of power lines. When that isn’t an option, crews typically cut branches to give them two to three years of growth before a follow-up trimming is needed. Since the line on Hafler’s lot was installed in the ’30s, the trees in question must have been planted after the fact, Boyles noted. He said that it wouldn’t be fair to make customers pay for the relocation of the line when the only concern is aesthetics, though Hafler could foot the bill himself.

“To move it would cost money, and somebody’s got to pay for it,” Boyles said. “There’s not much else we can do.”

Ogden said the only scenario he could envision that would get the lines moved would be for a high-profile authority figure—a county supervisor or state senator, for example—to get involved and mitigate a compromise, though such a move is unlikely.

Since Hafler can’t afford to take the matter to court or pay to move the line, he decided to fight back in other ways. He refused PG&E’s requests for permission to enter his property. When they persisted and brought the police to help them, he turned on the sprinklers, had a friend climb one of the trees, and generally berated workers and the police, according to Commander Allen.

“If he doesn’t want them out there, there’s a legal way to go about it,” Allen said. “But he won’t pursue that avenue.”

Hafler said the police were rude to him as well, laughing at his concerns and treating him with disdain. He said he’s especially upset that workers left their trimmings for him to pick up. The ancient telephone poles from the original 110-volt line still litter his property as well. Otherwise, the place is immaculate, he said.

“They’re just walking all over me, because I’m nobody,” Hafler said. “They did it to spank me, to teach me a lesson.”

Allen said that he advised workers to get the job done and leave as quickly as possible, since Hafler was acting angrily and could have gotten violent.

Staff Writer Nick Powell can be reached at npowell@newtimesslo.com