The video is disturbing.

It’s July 20 and the alleged victim, a severely autistic man in his early 20s, sits at a table playing with a puzzle in a living room. After arguing about what appears to be a possible trip to the beach, the man’s caretaker, identified as Scott Allen Rogers of ResCare HomeCare, walks behind the man, grabs him, and violently lifts him out of the seat.

A struggle ensues. The two fall behind a table, and the view is obscured. Rogers can be heard grunting. The man yells and calls out to an otherwise empty home, a yurt in Cayucos. The sounds continue as the young man is dragged by the arm outside a door and out of view. The sounds of the struggle continue. At some point a man, presumably Rogers, can be heard saying, “God, I can’t believe you did that.” 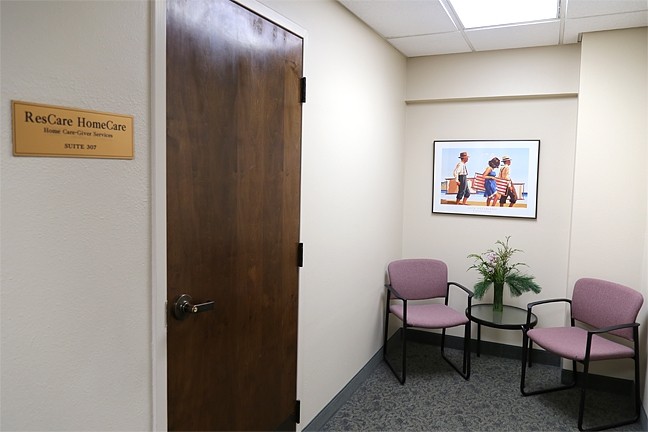 That video and at least one other, taken by a hidden camera, are the basis for a lawsuit brought by the man’s mother against Rogers and ResCare, the company who employed him. The suit was filed in SLO Superior Court Dec. 8 by local attorney Jeffery Stulberg. It claims that Rogers willingly battered the young man, who is described as “wholly dependent on others” in order to engage in the activities of daily life. The lawsuit claims that Rogers restrained the young man, twisted his arm, pushed him to the floor, and also kicked him.

“[Rogers’] misconduct was egregious and videotaped,” the suit states.

Photos claim to show the aftermath of the alleged incident. The young man appeared to have a large, circular mark on his arm, as well as what appear to be other abrasions on his arms and forehead. Rogers can be seen later on the tape showing the marks to the man’s mother, who is his guardian. He tells her that marks occurred when the man was sitting in his truck and began “kicking and grabbing” at him. Rogers says the man fell down near his truck, but doesn’t mention the struggle inside the house. The young man can be heard saying, “watch it” as Rogers moves close to show his mother the marks.

According to documents obtained by New Times the man’s mother later text messaged Rogers and asked him not to return to the home.

“I know today was rough with [the victim] and that he tries your patience, but you crossed the line in trying to get him to the beach,” she wrote.

This isn’t the first time that Rogers was accused of such behavior. According to the lawsuit, he’s been charged two times before with assault-related offenses in San Luis Obispo County.

The first incident occurred in 2008. During his employment at Atascadero State Hospital, Rogers reportedly groped the breast of a female coworker. According to a 2013 filing by the California Board of Vocational Nursing and Psychiatric Technicians, Rogers was initially charged with sexual battery in connection with the incident, but later took a plea deal and was placed on probation after he pleaded “no contest” to a misdemeanor assault charge.

The second incident occurred in 2011, when Rogers, according to Atascadero police, grabbed his then 19-year-old son by the throat and threatened him with a hunting knife. He was initially charged with assault with a deadly weapon, but again the charge was dropped to a misdemeanor assault charge after he pleaded “no contest” in SLO County court.

In 2013, the state board revoked his psychiatric technician license because it said Rogers failed to disclose those convictions and failed to cooperate with the board’s investigation. The board’s documents did note that Rogers was trying to improve his situation, had complied with the terms of his probation, worked to mend the relationship with his son, and rebuild his life.

“However, his crimes are serious and relatively recent. … At present, the order that follows is necessary for the protection of the public,” the board wrote.

New Times was unable to reach Rogers for comment on the matter.

The lawsuit alleges that ResCare failed in its duty to conduct a proper background check on Rogers.

“Had ResCare performed even the most rudimentary of such background checks, it would have discovered that [Rogers] had been convicted of violent assaults in 2009 and 2011 in SLO County,” the suit states.

ResCare Inc. is a massive corporation that runs residential and in-home care services in locations across the United States, including a branch in SLO. While the company’s website does state that ResCare conducts criminal background checks on employees, it does not specify what crimes are considered. Robert Bradshaw, regional manager for ResCare’s SLO location, declined to state whether or not the company knew about Rogers’ past. However, the 2013 filing by the California Board of Vocational Nursing and Psychiatric Technicians stated that Bradshaw wrote them a letter stating that Rogers had been working part-time with the company since 2010 and described him as “caring, compassionate, and competent.”

ResCare’s corporate headquarters also declined to answer questions from New Times about the case and the specifics of criminal background checks on employees.

“I apologize, but after looking into this, since it is pending litigation, we are unable to comment about this situation at this time based on our organization’s policy,” ResCare’s director of communications, Kristen Trenaman, wrote in an email response to New Times.

The allegations are far from the first time the company has faced accusations of mismanagement. In September, a family in Detroit sued the company, claiming it failed to conduct a proper background check on one of its homecare workers, who they say tricked an elderly widower into marrying her and bilked him out of $1 million. According to the Detroit Free Press, that caretaker was wanted for two felony charges and was convicted of two misdemeanors. The case was dismissed in October. In October, police in Greenville, Ind., arrested a ResCare employee who allegedly left three severely disabled people in a van for hours while he went shopping at a local mall. In April, a group home for the developmentally disabled located in Austin, Texas, run by ResCare lost its license to operate after a severely autistic man escaped the facility and was shot and killed after an Austin resident thought he was trying to break into his home.

As of Dec. 21, neither ResCare nor Rogers had responded to the lawsuit. According to the SLO County District Attorney’s office, Rogers hasn’t been charged with any crime in connection to the incident. An incident report from the SLO County Sheriff’s Office indicated that an incident of dependant adult abuse was reported July 20 at a residence in Cayucos.