What do you do when you’re a talented singer-songwriter who’s too busy with college to fully pursue your rock star dreams? If you’re a blond kid from Montana with a knack for writing breezy folk numbers, you start playing parties and opening gigs for established bands, and then you head into the studio to cut an EP, which you call From the Mountains to the Sea, and then you release it to the public this Thursday, Feb. 12 with a free show during Cal Poly’s University Union Hour (11 a.m. to noon).

As a kid, now-20-year-old Chase McBride found his first inspiration in the music of James Taylor, and his first instruments were drums he manufactured from coffee cans and tape. When his older brother received a guitar for Christmas, McBride found himself working out chords on it whenever he could wrest it away from its rightful owner.

Since coming to Cal Poly a couple of years ago to study graphic design, McBride has been writing madly, and now he’s ready to debut his first recording to the world. The new five-song collection is filled with jangly, hook-laden folk pop numbers in the vein of Jack Johnson, delivered by a casual, barefooted performer.

If you miss the Poly show, look for him again next month when he’ll hit the Downtown Brew stage on Friday, March 6 for a fundraising concert for Special Olympics.

Romance is in the air. Whiiiiiiiiffff! Smell it? Mmm. Romance. Whether you’ve got a date or want one, you’ve got to go out on Valentine’s Day! Sure, you could go have a romantic dinner or a walk on the beach, but that’s so cliché! Music, my friends, is the ultimate aphrodisiac. Dance is foreplay!

Local folk duo Bob and Wendy, whose new CD Ghost of Guadalupe is the perfect soundtrack for a love affair, play a 4 p.m. in-store at Boo Boo Records on Saturday, Feb. 14. The husband-and-wife team promises to thrown a few love songs into their set, and if you don’t have a valentine, you can hang out with the band after the show.

Also, Villa Valdemosa Bed and Breakfast in Paso Robles is having a 7 to 9:30 p.m. house concert with Café Musique, an awesome Gypsy, tango, swing, and waltz act. Guests will enjoy fancy appetizers, wine, and of course a chocolate-themed dessert! The cost is $35 each. Call 237-0170 to RSVP as seating is limited to 30.

Unfinished Business will rock the house from 7 to 11 p.m. at a Valentine’s Dinner Dance at St. Patrick’s Hall (501 Fair Oaks, Arroyo Grande), during a fundraiser for the Knights of Columbus. Tickets are $50 per couple and $30 for singles. For tickets, call Mike at 489-4869 or e-mail mikegroverbeach5@charter.net.

Plus, eight-piece soul-indie-experimental act Forrest Day plays an 8 p.m., $5 show at Downtown Brew. You’ve got to be 18-and-older for this one, kids.

Or if you’re in Avila, check out the awesome Cuesta Ridge during an 8 p.m. show at Mr. Rick’s.

And for you night owls, at 10 p.m., rock/funk act the Private Criminals will play Frog and Peach.

Maybe Donavon Frankenreiter’s parents knew, or at least hoped, that their son would be a great folk singer like that other Donovan, he of “Mellow Yellow” fame. But perhaps so as not to put too much pressure on him, they changed the spelling around, from Donovan to Donavon.

That’s mere speculation, but what’s not in question is that Donavon was born in California in 1972, grew up surfing San Clemente, scored sponsorship from Billabong, traveled the world as a pro surfer, became pals with Jack Johnson, and like Johnson began a post-surfing career as a folk artist of some renown.

Pass It Around is Donavon’s third recording, about which he noted in his bio, “I definitely had a lot of ideas and it was fun putting trust in other people.”

Donavon enlisted Ben Harper on the title track, and Philadelphia’s most famous surfer G. Love, who adds harmonica on “Sing a Song.” Grant Lee Phillips joined Donavon on “Mansions on the Sand.”

“I had an amazing experience with Grant Lee Phillips. I had a verse of a song and I had no lyrics for and couldn’t find a chorus. So we worked on it together, found a chorus and then let it go for a while. When he sent it back to me, I was blown away.

“I’ve always tried to incorporate the visions of the ocean, the tide, the surf in my music. But I never could, because it would be corny. It would be like I would be ‘in the waves,’” joked Donavon, who noted it took Grant Lee Phillips to help him celebrate the water he so loves. “And it came together and from a guy who doesn’t surf!”

Opening for Donavon is fellow folky Gary Jules, whose new CD Bird marks the culmination of an unlikely rise. In 2007, Jules found himself on two Billboard Top 100 charts, driven solely by iTunes downloads with no commercial radio play whatsoever. The magazine decided to run a feature article on him, which started a worldwide phenomenon.

On Tuesday, Feb. 17 at the Graduate, see Gary Jules open for Donavon Frankenreiter at 8 p.m. during an 18-and-older show. Presale tickets are $18 at all Central Coast VALLITIX locations including Boo Boo Records, the Mustang Ticket Office, and the California Mid-State Fair Box Office. Charge by phone at (888) 825-5484. Order online at vallitix.com.

Live music returns to Mother’s Tavern this week. For those who don’t know, Paul Brown sold Mother’s to Ash Management, the same company that owns almost every other bar in town, including Bull’s, McCarthy’s, the Library, Frog and Peach, and Marti’s. On Thursday, Feb. 12, Tropo, an act that includes rock fiddler extraordinaire Tyson Leonard (formerly of Rain Fur Rent and Glider), plays at 9 p.m. “In Tropo we have violin, a lot of electronica and house beats, synths, bass, and pedal steel,” explained Leonard. Sweet!

Two stars of mega rock acts play solo sets at Downtown Brew this Thursday, Feb. 12. Hear Joey Cape, lead singer-songwriter of Lagwagon, and Chris Shiflett of the Foo Fighters, when they play an 8 p.m., 16-and-older, $10 show. Denver-based alt.country sensations Drag the River will open the show. Since Cape’s been working on the next Lagwagon album, fans might get an early listen of the new material, the band’s first album since the band paid homage to their deceased original drummer Derrick Plourde on Resolve.

Dos Mas Production proudly presents SOJA at Downtown Brew this Friday Feb. 13, with opening act The Kicks (7:30 p.m., 18-and-older, $12 presale or $15 at the door). SOJA’s got a new single, “Rest of My Life,” on youtube.com, and they just returned from a tour of Hawaii and Guam.

Punk/psychobilly/bluegrass act Los Duggans will play the Frog and Peach on Sunday, Feb. 15, at 10 p.m. Featuring Dylan Wilkerson (National guitar, banjo, lead vocals), Peter “Whiskey” Sheffer  (washtub bass, harmonica, lead vocals), Miguel Hernandez (electric guitar), and Adriel “Capt. Moonlight” Hernandez (drums), the band, according to Rockabilly Magazine, “Does for and to traditional country what the Gun Club did for and to orthodox blues: respectfully violates it with kamikaze punk attitudinalizing.” 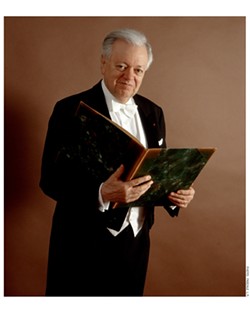 Glen Starkey’s idea of foreplay is a half an hour of begging. Set up a date at gstarkey@newtimesslo.com.