'Homeless but not helpless'

Following the eviction of 13 residents from Sunny Acres, the sober living facility run by San Luis Obispo rancher Dan De Vaul, homeless advocate Becky Jorgeson organized a gathering at the steps of the county courthouse on Sept. 7 to protest what she called the county’s failure to provide low-income housing and adequate services for the local homeless population. 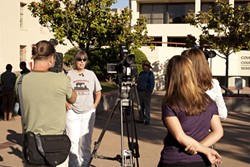 About 30 people—a few of them former Sunny Acres residents and local shelter regulars—showed up to hand out flyers, wave to vehicles, and talk about possible solutions with passersby and media.

Among the biggest contentions from the group is what they call a lack of significant progress in the county’s “10-Year Plan to End Homelessness.”

“Many of these people need treatment, and we just don’t have enough of those kinds of services, which are the first step to getting them off the streets,” she said. She pointed at the street: “Unfortunately, this is often where recovery happens—if it happens.”

Jorgeson also spoke out against an alleged “general lack of respect” at the county’s two homeless shelters, the Prado Day Center and the Maxine Lewis overnight shelter.

“As one who has worked closely with CAPSLO and Friends of Prado, and with organizations that partner with them, I know this to be a baseless claim, and one that is entirely counter-productive,” he said.

There are nearly 4,000 people in San Luis Obispo County without permanent housing, according to local officials.

Jorgeson said she plans to carry out similar protests in front of government buildings “until we get something done.”