Homeless project may not end up at Hillside Church

A low-income housing and homeless services facility planned for southern San Luis Obispo County is one step closer to being developed somewhere other than its originally proposed and controversial location at Hillside Church in Grover Beach. 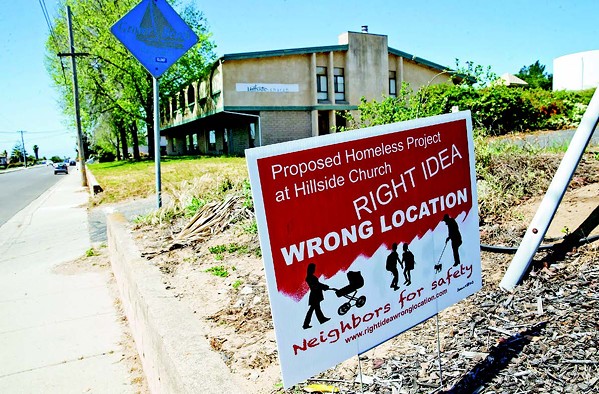 At a meeting on Aug. 13, the SLO County Board of Supervisors voted unanimously to ensure that grant funding associated with the housing and shelter project—which is being spearheaded by the 5Cities Homeless Coalition and Peoples' Self-Help Housing—is not tied to any particular property.

Supervisor Lynn Compton (4th District), who was one of two supervisors who voted against funding the housing and shelter project in April, said at the Aug. 13 meeting that the project's leaders are working to appease community members, many of whom say the project's development at Hillside Church in a residential neighborhood could lead to safety and traffic issues.

"I have had some calls about this, and I just want to assure the constituents that I have spoken to the 5Cities Homeless Coalition," Compton said at the meeting. "They did hear the concerns of the people the last time this came around, and they are going to listen to the concerns as they go forward and look for an alternate location to use these funds so we can have something that works down in South County."

In April, the SLO County Board of Supervisors voted to allocate $2.6 million to the 5Cities Homeless Coalition and Peoples' Self-Help Housing so they could acquire property at Hillside Church; rehabilitate existing buildings; and make way for a housing navigation center and offices, transitional housing for youth, and permanent housing units on site.

The funding is a portion of the county's Homeless Emergency Aid Program grant, which provides one-time funding to entities that hope to address homelessness. At least 50 percent of the funding must be used by Jan. 1, 2020.

Following the vote in April, the 5Cities Homeless Coalition and Peoples' Self-Help Housing entered into escrow for Hillside Church. Then in May, filings by an opponent of the sale called into question who actually owns Hillside Church and has the right to sell it. That battle is currently playing out in court.

The property is still in escrow, according to John Fowler, CEO of Peoples' Self-Help Housing. But with the situation indefinitely unresolved, Fowler said there is concern over whether Hillside Church will be available for purchase in time to meet the 2020 spending deadline.

"Today was a big step for us to say the funds could be transferred," Fowler told New Times.

Project leaders haven't completely given up on Hillside Church, but Fowler said they are working to find other sites in the Five Cities area that could work. Nothing has been officially decided, and Fowler said there's only so long that the question of where to develop the project can remain up in the air. If it isn't resolved, he said 5Cities Homeless Coalition and Peoples' Self-Help Housing may have to hand the funding over to someone else.

"I think everybody is trying to find the right solution," Fowler said. "There are no bad people here. We're just having a hard time finding the best path forward." Δ