As tough times touch all, more volunteers identify with those in need 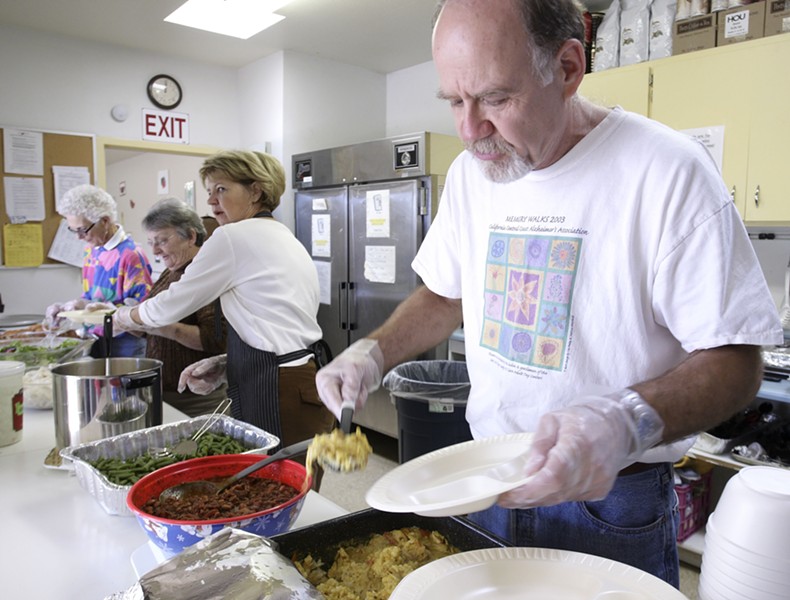 Brenna closes her eyes and sits back in the couch as Steve begins to massage her feet. It’s perhaps an unlikely scenario: a masseur seated at the feet of a person too poor to have a home. But at the Prado Day Center, a service station for the homeless and hungry in San Luis Obispo, clients can look forward to such little luxuries as this, along with breakfast, telephones, and clean laundry ... seven days a week.

Steve Eabry has been coming to Prado for ten years, quietly working out the tough, aching soles of those who find themselves in need. When asked why he chooses to rub feet, he says simply, “It's easy to do, and it feels good.” It's a touching gesture, and a reminder of the humanity that is often masked by the alienating words “homeless” and “unemployed.” Brenna, who was born and raised in San Luis Obispo, says, “People look at you differently when you're homeless. I know, I've been on both sides of it.”

But it seems this attitude may be changing. As layoffs, foreclosures, and the general tightening of the belt continue, more and more people are feeling the strain, and according to Dee Torres, Prado manager and EOC homeless services director, more are identifying with the sector of the community that once seemed so removed. Kim, the next up for a massage, says she used to think that the homeless were all “hobos”—people who had chosen to break off from society—until she was shocked to find herself among them, and certainly not by choice. Hundreds of people like Kim, who never expected to be in such desperate need, are finding their way to the Prado Center and other such lifelines now. At Loaves and Fishes in Atascadero, a pantry volunteer says that 20 new faces per week have been showing up. “They've lost their jobs, they don't know the system, and they’re embarrassed to have to ask for help,” she says.

Ironically, it’s precisely because the economy is affecting so many so much more than ever before that Torres is confident about the future. “People are realizing, ‘It’s hard for me to make it.’ They understand that they could lose it all, too; it really could happen to anyone,” she says. The sobering thought has resulted in a moving display of solidarity, seen in everything from anonymous donations to foot rubs. “I feel like I have a small army behind me,” Torres says with a smile, listing off the attorneys, retired community members, generous patrons, Cal Poly students, police officers, and a whole motley crew of unlikely supporters who join Steve the masseuse to offer whatever they can to those in need. “Every little bit helps,” Torres says. “The idea of homelessness can be overwhelming, but [donating] a 24-pack of hot cocoa isn't, and that means 24 people start their day off a little better.”

Torres does not deny that times are getting tougher; the holiday season was more challenging than ever and numbers of day center clients have “exploded.” But Torres faces the challenges with a cocoa cup half full perspective, and is “fearlessly trying to move into the future despite the economy.”

Prado recently received approval to operate their day center as an overnight warming facility on nights of severely inclement weather (though they had no budget or staff in place for it); they’ve completed a ten-year plan for ending homelessness in San Luis Obispo; and they have hopes of eventually uniting the Maxine Lewis Memorial Shelter and the day center into one all-encompassing Prado campus. Though some have given them flack for their high-flying hopes, Torres is resolutely positive. “This is the time to be courageous—and creative,” she exclaims.

Carl Hanson, director of The Food Bank of San Luis Obispo County, expressed a similarly upbeat outlook. Admitting that need has risen 25 – 50 percent in the last few months, he says that, on the other hand, the food drive this holiday season was more successful than ever before. “It’s been so inspiring to live in a community where people really understand that there is both need and [desire] to help people who are having problems.” They realize anyone can fall into hard times, he says, and their support gives him a sense of hope in the face of the certain challenges 2009 poses. He’s optimistic that this community has the ability and heart to come together, “much like a family would,” to help each other. “That might sound 'pie in the sky,' but I truly believe that to be true.”

Believing in the power of compassion may indeed sound a little “pie in the sky.” In fact, you might say it's a bit “hot cocoa and foot rubs in a homeless shelter.” It seems unlikely, but our local nonprofits are proving that with a little courage, creativity, and community support, anything is possible.