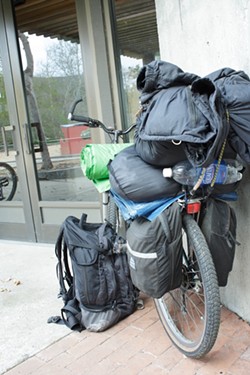 Homelessness in SLO County spiked by nearly 60 percent between 2005 and 2009, according to a count that identified 3,829 people homeless in the area on the day of the count. That number compares to 2,408 identified in an October, 2005 effort.

The number, while bracing, isn’t shocking to those who follow housing issues in the county, which consistently ranks among the least affordable areas in California and the nation.

“I’m surprised in some ways but not considering how bad the local real estate market has been,” said Jerry Rioux, executive director of the SLO County Housing Trust Fund, which focuses on developing housing for people with very low incomes.

He said foreclosures have only decreased the supply of rental housing locally and, while unemployment has shot up, rents have largely stayed the same.

“The ramifications are that housing will continue to be difficult for people with modest incomes in this county,” he said.

The more recent homeless count took place in late January, although the official report on its findings has yet to be made public. Stephan Lamb, heading the project for Cal Poly, said the release has been delayed repeatedly because of a switch in researchers working on the report. The count is sponsored by the county and Cal Poly and described as a project of the Homeless Services Coordinating Council.

“It’s been more problematic than not,” Lamb said of putting together the report.

Still, the basic findings from the “enumeration” have worked their way into various county documents and have been discussed openly at board of supervisors meetings. A report on homeless youths, for example, noted that 988 of those identified as homeless were young people. That figure was up sharply from the previous report.

And County Planner Morgan Torell, speaking to the SLO County Board of Supervisors recently, noted that 675 of the 3,829 homeless were identified in unincorporated areas of the county—the rest were in the cities.

Officials involved in the report said that accurately counting homeless people can be difficult because there’s no one definition of “homeless.” They said the recent figures almost certainly underestimate the true numbers of homeless county residents. For the purposes of the count, the definition includes people in shelters, those living completely without shelter, those living in RVs or other places not meant as homes, and those without stable housing, such as people sleeping on floors or couches of acquaintances.

A recent report on the county’s 10-year plan to end chronic homelessness, however, offered some sobering statistics, including:

• Renters in SLO County need to make more than $20 per hour on average to afford a modest two-bedroom apartment but the average renter earns about $10 per hour.

• About 55 people exit county public institutions, such as jail or mental health facilities, each month and become homeless.

“There’s no question,” said Rioux, “housing will continue to be difficult in SLO County.”