Starstruck Mate is a magnificent, golden-hued, sorrel gelding, strong and muscular, with a “great potential as a performance cutting or reined cow horse,” according to Cal Poly. 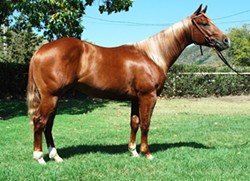 When Tina Reis saw the then 2-year-old listed in a catalog as one of roughly 20 performance horses for sale at last year’s Cal Poly Annual Performance Horse Sale, well, you could say she was a bit star struck herself.

But after she bought the horse in mid-2011, the Bakersfield resident said Starstruck Mate began to show signs of serious illness. As she followed up, she said she soon realized there were a lot of things she didn’t know about her new horse, including that he wasn’t born and raised at the university’s equine center, as she claims was advertised.

Ries said she was under the impression that the horse had been born and raised at Cal Poly, and that the money she was shelling out would go to specifically benefit the university’s equine unit. Had she known the fee would be going to a private owner, she said she would never have made the purchase.

“People are willing to pay more for a horse if they believe it’s going to a good cause,” she said.

Indeed, on the second page of the 2011 sale catalog, just above a photo of Cal Poly President Jeff Armstrong, is a statement: “Cal Poly Horses are bred, raised, trained, and marketed by students as a part of our hands-on, learn-by-doing philosophy. Proceeds from this sale will be used to support Cal Poly’s Equine Program.”

In what she called a “nightmare” scenario, within 48 hours of taking him home, Ries saw Startstruck Mate showing signs of pigeon fever, a contagious, bacteria-based disease that can cause abscesses to form. Clearing him of his ailment took a five-week stay at a veterinarian hospital, Ries said.

But that wasn’t the extent of Startstruck Mate’s health problems. In November 2011, the horse again ceased eating. Ries decided to follow up with the previous owner—whom she said she only met following her winning bid. The owner revealed in an e-mail exchange that the horse had actually become sick while in training at Cal Poly and had to be transported to Alamo Pintado Equine Center in Los Olivos. He was diagnosed with an impaction, pneumonia, and “other complications” resulting from his reluctance to eat or drink.

“Other complications,” it turns out, meant renal tubular acidosis—a rare buildup of acidity in the blood caused when the kidneys fail to properly filter acids, according to information provided by Alamo Pintado. The previous owner e-mailed Reis that Starstruck Mate had fully recovered and re-entered training at Cal Poly.

That lawsuit was rejected in May. Despite the ambiguous conditions under which she claims she bought the horse, and her allegation that Cal Poly should have known of his suspected ailment, the university’s sales terms and conditions effectively cleared them of any liability.

“All known defects will be described before the bidding begins on each horse and every horse will be sold under that rule,” the fine print reads. “Therefore, no horse can be rejected by a buyer after being struck off by the auctioneer. Once any animal has been removed from the sale grounds, no recourse is available and the transaction is final.”

Alaina Parsons, a Cal Poly animal science lecturer and a coordinator for the annual sale, told New Times that Starstruck Mate’s consignment status was made perfectly clear at the podium prior to Ries’ winning bid. Parsons said she didn’t know why there was a misunderstanding, but she did say that the university has since made a point to ensure that all bidders know if a horse has been consigned to the university’s program.

For example, the online catalog for the 2011 sale made no mention of consignment sales. The 2012 website specifically lists at least two horses as consigned for sale.

Parsons added that there were no signs prior to the sale that Starstruck Mate was sick. She explained that even horses that have been consigned to the university for sale go through a stringent six-month process of evaluation, training, and grooming completed by a combination of animal science students and faculty.

“Consignment for us means these horses have to meet a specific set of criteria and have completely undergone our training program,” Parsons said.

She said this is the first case she’s aware of in which a lawsuit resulted. She pointed out that, prior to the 2011 sale, the university rarely offered horses from private owners. But since the economic downturn, she said, it’s become a more common practice, as the university wants to offer as many quality horses as possible in order to attract a large bidder pool.

“It’s our biggest event of the year, and we want to make sure people come and support our program,” Parsons said.

The university is currently gearing up for its 2012 Performance Horse Sale, set to take place on campus Aug. 25. The website for the sale is currently under construction, but Parsons said it’s expected to be updated by mid-July.

Ries, who ended up selling Starstruck Mate in April, said she hopes her experience will be a warning to others to ask questions.

“Unfortunately, horse auctions are buyer-beware, and you hope your seller is going to be honest,” she said.