Hospice SLO County creates space for conversations about anything related to death, including cremation

On Aug. 26, chairs formed a circle in one of the main rooms of the Dorothy D. Rupe Center, home of the volunteer-run Hospice SLO County.

Natural light filtered through a large front window, accompanying the candle flames spread around the room. Adults of varying ages trickled in while an attendee played a tune on the piano.

They're there for the Dancing with Death event hosted by Kris Kington-Barker, a certified end-of-life doula and executive director of the hospice. 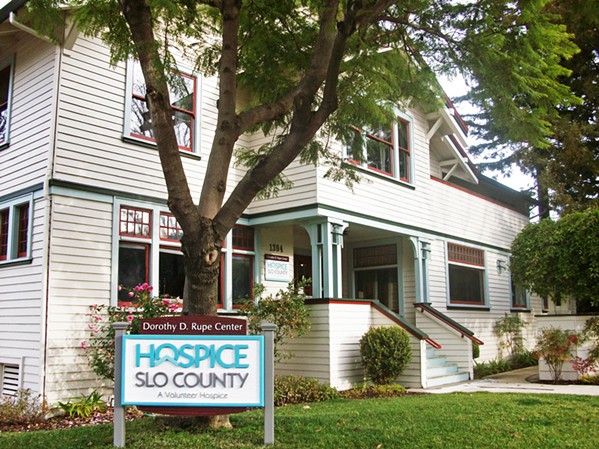 In a phone call with New Times, she said that Dancing with Death is a place for community members to explore topics related to the end of life.

The event is similar to the Death Café, Kris Kington-Barker said. The difference is that Dancing with Death begins with a speaker, a film, poetry, music, a TV show, or a lecture to help launch the conversation.

Meeting attendees start by saying their name and why they're participating in the event. Their reasons varied from curiosity to the experience of losing a family member.

"I've had everything from people who have said, 'You know, I'm here because I looked in the mirror and said I'm an old man. It's the first time that I've had that reaction to my reflection and it scared me,'" she said.

The point of the meeting is to be able to talk about death without fear.

According to the American Psychological Association podcast, Speaking of Psychology, nobody likes talking about death or finds it easy to talk about.

"But they are topics that everyone will need to face at some point in their life, and that's true for family members and their close friends, but also true for themselves," it stated.

The podcast suggests that people should talk about death because it can happen at any moment, so it's better to be prepared.

Locally, Dancing with Death enables attendees to talk (or ask questions) about how to approach a family member about what to do with their things once they're gone or whether they want a burial, cremation service, or another alternative.

Kington-Barker said the ongoing event is about having a dialogue.

Romany Waters spoke at the Aug. 26 event about her local work as a certified mortician and cremationist, state-licensed funeral director, and crematory manager.

"I didn't really think about working so close to death, until I couldn't stop thinking about it," she said.

Waters has been a student of otherworldliness and near-death experiences since the '70s. She and her spouse, Alicia, would often drive by Los Osos Valley Memorial Park and talk about how they would like to run a cemetery—Alicia said she would love to do the flower arrangements.

"I joked about becoming a mortician. Then I thought, I could become a mortician," she said.

Waters works for a company called Service Corporation International-Dignity Memorial and is based at their Los Osos Valley Memorial Park, Mortuary, and Crematory location. She works closely with Chapel of Roses Mortuary & Crematory in Atascadero and Kuehl-Nicolay Funeral Home in Paso Robles. Waters also performs cremations for the Neptune Society.

She's been in the field for five years, and she told New Times via email that she loves her work.

"Offering a calm, solid, positive, loving energy and space to folks who are grief-stricken (and often shocked), and still here after their person has died," Waters said.

Every service, whether it's for a burial or cremation, is different, she said. The conversation on Aug. 26 quickly steered to questions about cremation—such as how being cremated in a casket affects things.

In her experience, she said, when a person is cremated in a simple wooden casket, the remains are mingled with fewer chemicals.

Attendees also learned that it's OK to ask whether they can be more involved in the cremation process. Waters said some people want to push the casket into the cremator and push the button because they want to have some control, while others aren't interested in being involved.

The cremation process can take—depending on the body type and type of casket—anywhere from two to five hours. She said she's only ever had two cases where the individuals stayed throughout the process for cultural reasons.

Typically, Waters said, the families leave after some time, but it's up to them when to start the process and when to leave—there's no pressure.

According to the Cremation Association of North America's 2019 Annual Statistics Report, cremation rates have continued to grow, "confirming that cremation is the new tradition."

Kington-Barker said having these conversations is like turning on the lights in a room.

"When you enter the dark room and you're hearing sounds and don't know what those are, it's scary," she said. "When you turn the light on and you see that it's just a cat scratching itself in the corner in its sleep, that's not scary." Δ