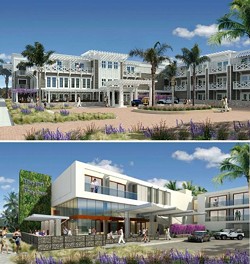 Local developer Dana Severy has finally gained approval for his hotel project opposite the Pismo Pier after months of negotiation with the Pismo Beach Planning Commission.

During its July 22 meeting, the commission voted 5-0 to approve the project, dubbed “The Inn at The Pier,” which was first presented to the commission in February of this year.

“You hit a home run. Not only have you hit a home run, you’ve made a touchdown, you won the World Cup,” Commissioner David Jewell said, addressing Severy. “I think this is the greatest project I ever saw—this is what I was looking for.”

Though the approved design isn’t exactly what Severy initially wanted, the hotel will have a rooftop pool, 104 rooms, 1,795 square feet of commercial retail space, a 2,150-square-foot meeting/convention room/dining space, a 775-square-foot business center, and a 132-space underground parking garage. Currently, the project site is a vacant dirt lot across from the Pismo Pier.

Among the revisions enacted after commission discussion are a reduction in hotel rooms (from 108 to 104), an increase in commercial retail spaces on Pomeroy Avenue and Hinds Avenue, and sweeping changes in architectural style.

“The revised renderings and plans reflect a beach cottage architectural style with craftsman elements,” Associate Planner Mike Gruver wrote in the city’s staff report. “The use of the horizontal and board-and-batten siding, resting on a stone base or foundation, are more appropriate for the downtown’s coastal setting and overall the revised project appears more comfortable in this setting, than the previous design.”

Severy said the lengthy, convoluted approval process (the commission held public hearings on the project on Feb. 25, March 11, and July 22, as well as workshops on April 2 and April 29) was “water under the bridge” now that the project was approved.

Assuming there is no appeal of the project, Severy said he’d be moving forward in “a very expeditious manner,” and hopes to start construction in early 2015. To be considered, any appeal would have to be filed by Aug. 1.

“I know it has been a tough road, but I absolutely love the way it looks,” said Chairman DJ White. “We look forward to seeing this break ground.”