But it's not for the usual reason. He sidesteps taking credit for any of his accolades and instead defers compliments to individual team and family members.

At Piadina, Fancher himself whips up farm-fresh fare—with a significant assist from his wife and daughters—while chef Kenny Bigwood puts his unique spin on light fare at the hotel's scenic rooftop eatery.

That's not to say Fancher doesn't have his hands full. He expertly oversees kitchen team members at the 78-room, 115,000-square-foot San Luis Obispo hotel, giving advice or guidance when solicited. But his most endearing characteristic is humility, according to employees and colleagues. He gladly takes a back seat when possible, fostering a supportive and innovative work environment.

"Ryan is the conductor of a dining orchestra, providing staff with the autonomy they need to develop and excel," said Ryan Deovlet, winemaker for his own self-titled label as well as Biddle Ranch Vineyards in SLO.

As a chef he possesses a killer trifecta of traits, Deovlet explained.

"He is humble, classically trained, and yet experimental at the same time," he said.

Deovlet witnessed team Fancher in action as part of Ox + Anchor's winemaker dinner series. The series featured his wines not once, but twice—an impressive feat given the local competition.

The hotel's inaugural winemaker dinner series debuted in January 2020, shortly after the hotel celebrated its grand opening in December 2019.

Rivas and Fancher nabbed Deovlet and his award-winning wines to kick off the series. Deovlet said Fancher welcomed his input on menu creation, and the end result was the best winemaker dinner he's ever experienced.

"We pushed each other to think outside the box," Deovlet said, "and boy, did [Fancher] execute. He crushed it."

The inaugural team reunited in July of this year, hitting another winemaker dinner out of the park, Deovlet said. The six-course feast showcased Biddle Ranch selections.

"I was very grateful and impressed with how Ryan and his team elevated our wines," Deovlet said.

Elevating Central Coast wines probably sounds oxymoronic to Fancher, who praises the area's "big fruit-bomb cabs and syrahs, to mild coastal-climate pinots, and everything in between," he said. "Winemakers are amazing in this area."

Since launching in 2008, Deovlet's wines have made Wine & Spirits' "Top 100 Wineries" list four times, most recently in 2021. In fact, 10 of the list's top 20 California wineries hail from the Central Coast.

But it's not about the awards, Deovlet says. It's about connecting people—from creating the wine to sharing it with others. "It's hard work," he added. "It's a calloused, gritty, blue-collar craft, but I love it."

Deovlet's unassuming approach to winemaking echoes that of industry veteran Gary Eberle. In fact, Fancher said, "Ryan is like a young Gary. He is super cool and down to earth."

Speaking of Eberle, Fancher and Rivas tapped the 77-year-old Paso Robles winemaker to headline their most recent dinner on Oct. 19.

"I was surprised to be asked when there are so many good stories out there in the wine world," Eberle said.

Eberle keeps his wines at an affordable price point, and the awards keep pouring in.

"A lot of these guys are charging $200 for a bottle of wine that is just average tasting," he said. "They get beat up by three or four other wines that are only a quarter of the price. That's kind of embarrassing."

The winemaker himself has won a slew of accolades, including the Rhone Rangers Lifetime Achievement Award, as well as Wine Enthusiast's American Wine Legend, and the Robert Mondavi Wine and Food Award.

It's flattering, Eberle said, but the bottom line is "we are a winery, and our job is to produce great wine."

Fancher connects with Deovlet's and Eberle's work ethic as well as their aversion to pretension.

"We are just trying to earn some respect by working hard and doing a good job every day," Fancher said. "Ox is all about execution and technique. It's pommes puree—mashed potatoes—but we hope it's the best you've ever had."

When discussing plans to expand their enterprise to San Luis Obispo and Hotel SLO, they knew exactly who they wanted to helm their restaurants.

"[Fancher] had a great reputation in town," Petrone said. "He respects everyone, from the dishwasher ... to the line cooks."

"I have always been impressed by the simplicity and elegance of Ryan's cuisine," he said.

"Ryan's depth of wine knowledge was also attractive," he added, enabling Hotel SLO to "showcase the wines of the Central Coast with exceptional food pairings."

Petrone's persistence certainly played a factor in Fancher's relocation to the Central Coast. But, he may also have been longing for home, according to his wife, Rebekah Fancher.

Born and raised in Santa Barbara, Fancher launched his career at Chuck's Steakhouse at age 15. He has covered every angle of the restaurant business, from dishwasher and waiter to butcher and bookkeeper. His lengthy 30-year repertoire includes stints at Auberge de Soleil and The French Laundry in Napa Valley, and Per Se in New York. 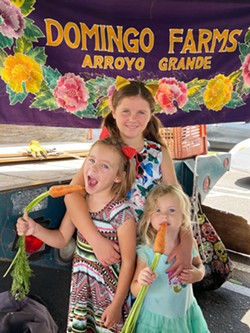 Here on the Central Coast, Ox and Anchor recently garnered the attention of Michelin Guide California in August. The publication touted its "charred steaks," with special mention of Piadina and its "Cal-Ital" menu.

Even Fancher's family has joined the Hotel SLO bandwagon. Rebekah runs social media for its restaurants, and their children help create Piadina's Wednesday Market Menu. Follow along on social media each week to see which ingredients the family selects at the Arroyo Grande Farmers' Market. Then see Fancher work his magic that night for dinner. It's a spur-of-the-moment, mad-scientist, three-course creation, and it sells out fast. Δ

Editor's note: This article has been edited from the print version for accuracy.