When Courtney Farr was 15 years old, her mother died of breast cancer. Farr said she remembers her mom noticing a questionable lump on her chest.

"She called her mom and her mom said, 'Oh don't worry about it; I have a lump in the same place, it's fine,'" Farr said.

If her mom had quick and easy access to a doctor, Farr said, maybe the cancer would have been detected earlier. 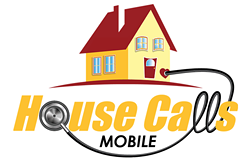 "That access to care, a lot of people are missing it, and they just need basic medical advice to get them in the right direction," she said.

Her mother's story and the drive to provide access to health care for all was enough inspiration to become a nurse practitioner.

In the recent years she's taking this a step further by creating a local service and product that gives people the option of having a doctor virtually visit their home or anywhere.

Farr's company, House Calls Mobile, is a primary care medical service that lets people schedule a time to visit their doctor with a phone call on a smartphone, tablet, or computer.

The virtual doctor visits are mostly for primary care, meaning if you have a cold and would like to consult a doctor or if you have a weird spot or lump on your body and would like an opinion on whether you should see a specialist—minor infections and medical questions.

Leaving her hometown Templeton behind, Farr received her education at the University of Southern California and earned a full scholarship to get a master's in nursing from Yale University. She said during her time at Yale, she learned that interviewing a patient can get you 80 percent toward the diagnosis, with the remaining 20 percent from a physical exam.

With Farr's virtual doctor visits, the patient can get about an 80 percent diagnosis. In order to get that 100 percent check-up, Farr created a stethoscope that connects to your smartphone, tablet, or computer.

The medical instrument acts as a typical stethoscope would; the doctor is able to listen to the action of someone's heart or breathing. It has a small disk-shaped resonator that is placed against the chest, but instead of two tubes connected to earpieces, there is a cord to connect the stethoscope to a device.

While a patient is talking to their doctor through the video call, Farr said the patient can plug in the stethoscope and the doctor can give a full diagnosis. The stethoscope is still in the beta-testing and FDA approval stage, but Farr is optimistic that she'll get what she needs soon and can start using her service and product on patients.

She's also in the starting process of making another tool, an otoscope. It'll have a similar structural concept to the stethoscope tool: The top portion will be able to go into the opening of an ear so the doctor can examine the eardrum and the passage of the outer ear, and it will connect to a patient's device of preference.

"It's always been my drive to improve access to people who can't get the access to health care, and this is what I've come up with," Farr said. "This makes it easier for everybody."

The Community Foundation of San Luis Obispo County opened a Disaster Support Fund, waiving all administrative fees to provide urgent assistance to organizations working on the ground in fire devastated areas in California. Through the Disaster Support Fund, The Community Foundation hopes to offer an avenue for San Luis Obispo County to unite and share in supporting victims and heroes of these fires. To find out how to donate or support the foundation's efforts visit cfsloco.org or call (805) 543-2323. Δ