A coalition of local housing organizations say they've struck a compromise on a pitch to SLO County supervisors for a three-year pilot program that could generate between $2 million and $5 million per year in new revenue for affordable housing.

The recommendations, which will be discussed by the Board of Supervisors at a Dec. 4 meeting, include a temporary beefing up of fees in the Inclusionary Housing Ordinance, which requires developers to either build affordable units with their projects or pay in-lieu fees, as well as other initiatives like a new sales tax or bond measure. 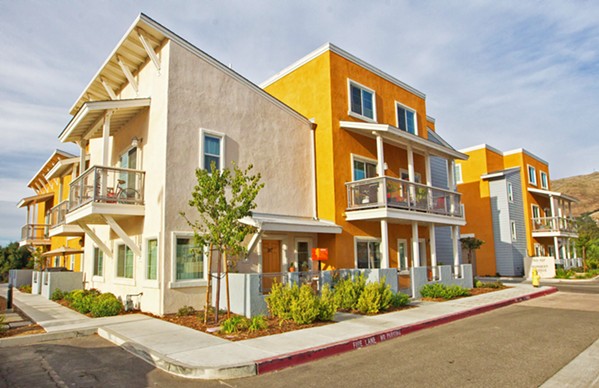 A diverse set of housing groups from the commercial, nonprofit, and public sectors came to the table over the past year to craft the recommendations, amid political gridlock at the county level over how to raise sufficient funds to support the construction of much-needed affordable units.

Currently, SLO County only generates about $100,000 per year for affordable housing, when housing experts say $2 million to $4 million is needed to produce adequate supplies for low- and moderate-income residents.

Coalition members told New Times their recommendations represent a delicate balance of interests and stakeholders. Those involved included the Home Builders' Association of the Central Coast, Peoples' Self-Help Housing, the Housing Authority of SLO and Paso Robles, the SLO County Housing Trust Fund, Habitat for Humanity, the SLO Chamber of Commerce, and the Economic Vitality Corporation.

"In the last four years, only 24 percent of the housing needed in the income categories that make up the largest part of our workforce has been built," read a Coalition of Housing Partners statement to New Times. "Our proposal for dramatically increased funding ... has brought together a diverse set of opinions and interests that we believe will make meaningful progress on our housing challenges for those in our community that are most impacted."

In its first year, the pilot program calls for a restructuring of the county's Inclusionary Housing Ordinance—to have higher in-lieu fees that increase with the size of the home but that do not apply to houses below a certain square footage (proposed to be somewhere between 1,800 and 2,200 square-feet). County supervisors, in a divided vote, rejected a similar set of reforms to the ordinance last year.

Per the pilot program, which was outlined in a Nov. 21 coalition letter to Supervisors John Peschong (1st District) and Bruce Gibson (2nd District), these developer fees would "sunset" after 2021—if "long-term, broad-based funding options are adopted." Longer-term funding options could be a vacation rental impact fee, increases to the transient occupancy tax or sales tax, and a bond measure. All except the vacation rental impact fee would require local voter approval.

The letter estimates that by 2020, the new inclusionary fees and a vacation rental impact fee could generate about $1.8 million per year. By 2022, if some other tax or bond measure is approved, funding for affordable housing could float between $2 million and $5 million.

"As we have previously communicated ... we believe that a minimum of $2 million is needed to begin to address our lowest income housing needs in the unincorporated area, which will be used to leverage outside funding," the coalition's letter read.

Affordable housing policy, especially the Inclusionary Housing Ordinance, has been a contentious political issue for county supervisors since its adoption in 2008. Supervisors Gibson and Adam Hill (3rd District) are proponents of increasing the fees, while Supervisors Peschong, Debbie Arnold (5th District), and Lynn Compton (4th District) have opposed that. Following a heated discussion on the issue in December 2017, Gibson and Peschong formed a subcommittee to create the stakeholder group and seek solutions.

The Nov. 21 letter to Gibson and Peschong appeared to be the second version of recommendations submitted. The first, dated Oct. 26, did not label the recommendations as a pilot program and did not include a sunset date for the inclusionary housing fees.

The Oct. 26 letter was an attachment to a recent county Homeless Services Oversight Council (HSOC) meeting agenda. The HSOC's housing committee voted to recommend the plan's adoption on Nov. 20.

Gibson told New Times he's generally supportive of the latest letter and its revisions. Peschong did not respond to a request for comment before press time.

"In order to get something together, if we want to talk about this as a pilot project, that's fine by me," Gibson said. "We're going to see that it's going to be markedly successful. ... The inclusionary housing fees are a fundamental part of trying to solve this problem. I think people will get comfortable with them. I suspect they'll be part of our program for quite awhile."

"I'd rather it pass for three years than not at all," he said.

All stakeholders involved agree that SLO County must take action to address its housing crisis.

"The housing dilemma in our region is really stifling communities, it's stifling families, it's stifling people's ability to grow a business in this county," said Michael Manchak, CEO of the Economic Vitality Corporation. "It's not getting any better. ... The communities and our local government must do more, working with the private sector, to help solve this problem." Δ