How does Measure J measure up?

Hear from supporters and opponents of this controversial ballot item

It's a 52-page document that everyone's talking about but almost no one has read.

As the campaigns for and against Measure J shift into high gear, 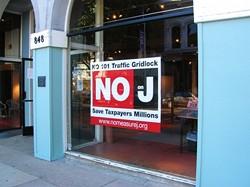 # voters and opinion-makers are talking about potential transformations to the community if Ernie Dalidio's development proposal successfully finds its way through the initiative process. Both sides have made claims. Naysayers have been accused of spinning the truth and disseminating misinformation, and, in turn, have accused supporters of calling them crazies, implying that arguments against the development are irrational.

Measure J which county voters will decide on in the Nov. 7 election says that Ernie Dalidio can carve out a 131-acre development on his land in the county adjacent to the city of San Luis Obispo. That development, if the initiative passes, would include a 13-acre organic farm, a seven-day-a-week farmers' market, a Monarch butterfly preserve visible from a grove of eucalyptus trees, a drive-through (possibly 24-hour) pharmacy, retail development featuring walkways and ornate fountains, and 60 units of workforce housing, according to the project's designers.

Dalidio's critics, on the other hand, say Measure J brings nothing new except for problems to the county.

Rumor and innuendo
Like a number of Dalidio's opponents, local activist David Broadwater believes that the development doesn't bode well for the future.

"It sets a precedent in a narrow legal interpretation," Broadwater said, speaking on the fact that San Luis Obispo voters turned down the City Council-approved project in April of 2005. "It sets a bad example that could start a trend: projects being approved in the county without all the public review." 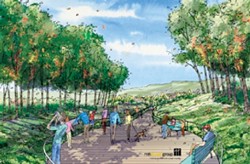 # Dalidio's architect Vic Montgomery of RRM Design Group said that the initiative doesn't set a legal precedent, nor is it the first development by initiative in San Luis Obispo County.

In 1980, he pointed out, the Paso Robles City Council voted against rezoning a new shopping center proposed by Linden Chandlar and the Williams Brothers. Undeterred, the developers placed an initiative on the ballot and swayed voters with the opportunity to shop at a Williams Brothers Market currently the home of Vons.

"If any precedent has been set recently, it is the Gearhart project, which was approved in less than two years without an EIR, right next to U.S. Highway 101, in the viewshed, with absolutely no outcry from opponents of Ernie's proposed development," architect Montgomery added. "This happened only after they received a $20,000 contribution from him. Now that's a precedent."

Last month, the County Coalition for Local Control mounted its "No on Measure J" campaign and generated a list of objections to Dalidio's initiative. The coalition contends that Measure J ties the hands of environmental control agencies, such as the Regional Water Quality Control Board, and, according to materials from the group, "avoids zoning regulations and public review by creating its own zoning district and prohibiting any changes even improvements to the project."

"The initiative process does not override the power of state agencies," he said.

Dalidio also disagreed, noting that the initiative contains 94 conditions of approval as a result of two environmental impact reports and 40 public hearings completed on an even larger project.

Agricultural land versus development
In the early 1900s, Dalidio's grandparents, Forino and Katie, drilled wells on the land, built a farmhouse, and cultivated the fields.

During the 1920s, the city of San Luis Obispo was booming and water was in short supply. The Dalidios drilled five wells one of which pumped 12,000 gallons a minute and from 1925 through the end of World War II, the family provided the city with water. 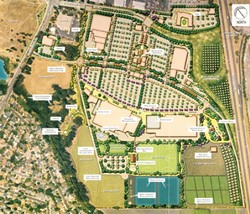 # Then, in the late 1980s, drought scarred the land and water shortages prompted restrictions. Ernie Dalidio stood in front of the City Council and offered liquid relief to the parched city. For about a year, water from under Dalidio's land flowed to homes throughout San Luis Obispo.

Dalidio, now 67, followed in the footsteps of his father and grandfather and cultivated the land from 1952 through 1997. He said that it's no longer realistic to farm land hemmed in by shopping centers and subdivisions.

"I have been a farmer all of my life, and I move my own equipment," Dalidio said. "You can move it, but it's a liability to drive it down the street with all this traffic. People fly around you, making your hair stand on end. It's the scariest thing. The Ag Commissioner said it is advisable to contact the neighbors when spraying pesticides. With row crops, we spray almost every day it's insane."

The "No on J" coalition is rallying against rezoning prime agriculture land and claims that Dalidio's property is one of the most productive plots of soil in the county. Simply farming the land is preferable to even a green development, the coalition maintains.

"The Ag Commissioner has said that there have been no complaints at all about farming on the property," coalition spokesperson Thomas said.

Even so, in the shadow of an ever-encroaching city, Dalidio's land is classified as a sensitive site and, as such, is subject to harsher pesticide-use regulations, said San Luis Obispo County Agriculture Commissioner Robert F. Lilley.

"Having a freeway on one side and development on the other side can create difficulties for the farmer," Lilley added.

A motorist hell is coming
Opponents point out that allowing Dalidio to build his development will slow traffic to a crawl in the Los Osos Valley Road, Madonna Road, and U.S. Highway 101 area.

However, with or without the Dalidio Ranch, interchanges in the area are slated to fail by 2016, said San Luis Obispo Council of Governments (SLOCOG) Executive Director Ronald De Carli. The development, De Carli added, could nearly cut in half the timeline to failure. 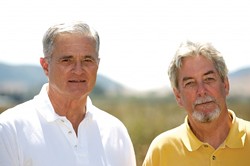 "No on J" campaign spokesperson Thomas is one of the initiative's fiercest critics. He's attacking it for allowing the developers to erect their retail developments before an overpass is completed.

"It's a 'build it first, figure out the problems later' approach that's very dangerous," Thomas contended. "If Measure J fails, the city will find a way to raise funds [for the overpass]."

SLOCOG Director De Carli said that without the project, a Prado Road interchange is unlikely due to a lack of available funding.

Even so, the coalition and SLOCOG argue that the initiative is flawed, as it would allow Dalidio to skirt an obligation to pay his fair share: 23 to 26 percent of total cost of the proposed Prado Road overpass.

If the initiative passes, Dalidio would be locked into contributing $8 million in cash and land as his share of the proposed interchange from 16 to 20 percent of total costs, if current Caltrans estimates are correct.

Dalidio has offered up his land as collateral to fund the biggest chunk of the overpass. A financial assessment district could be set up though it's not stipulated in the initiative with a portion of tax revenue from the Dalidio Ranch development slated to pay for the remaining cost of the overpass.

"Our designers think the cost is still between $27 million to $30 million," said Dalidio architect Montgomery. "Between now and the time the project is constructed, costs may vary up or down depending upon the current cost of materials and contractors. Dalidio is the source of funds and the source of the push to get Prado Road done. The last, best chance to build the Prado Road overpass is directly connected to passage of Measure J."

"Does anyone really believe the costs will be lower in five or 10 years?" Thomas said. "The taxpayers will end up paying most of the bill one way or another."

What more can they fight about?
In addition to its other arguments, the "No on J" coalition is rallying against "allowing Los Angeles and Texas developers to decide the fate of SLO County."

Project supporters contend that expecting a partially retired farmer to completely fund a development of this size is unrealistic. Los Angeles resident Bill Bird and Austin, Texas native Scott Dabney are lined up to invest in the retail portion of the project and both Lowe's and Target have contributed approximately $100,000 each, Dabney said. 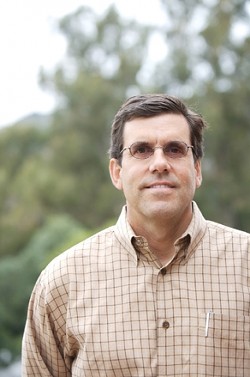 # "I've been working on this project for 10 years with Ernie," Dabney added. "You can't find a development this big and tell me there is no outside financing. The projects I've done have been low density and highly landscaped very green. I'm an environmentalist even though I'm a developer."

In August, the Tyler Men's Garden Club in Texas recognized Dabney with its yearly award for outstanding commercial landscape that enhances the public's appreciation of the environment.

Even so, "No on Measure J" spokesperson Thomas has serious concerns.

"Dalidio doesn't deny that developers from out of town will develop a major portion of the project," he said. "These builders will be able to build this huge project without following the normal environmental review process. We don't know who is funding their campaign."

The coalition denied a request from New Times for a list of its members and the names of its financial contributors.

INFO BOX: Who's signed on?

Dalidio Ranch's proposed development has been attracting interest. Here's a list of commercial tenants that Ernie Dalidio and others on his team said are currently under contract with the developers:

In & Out Burger, with a drive-through window (in negotiations)

INFO BOX: It's good to be green

Here's a partial list of green features included in the proposed project:

- more than 650 trees many selected for shadow size

- water efficiency through the use of native plants where practical