It’s a dark, unshakeable fact of life: Bad things happen, again and again. Childhood is so often portrayed in film, television, and theatre as an impenetrable bubble. How I Learned to Drive is a very sharp tack. The play runs Sept. 25 through Oct. 11 at SLO Little Theatre.

Written by Paula Vogel, the play centers on 11-year-old Li’l Bit (played by Erin Parsons), who is molested by her Uncle Peck (played by Don Stewart) during a driving lesson that goes terribly sideways. From there, Li’l Bit’s life gets messier. It’s the 1960s and the young girl’s family is rife with turmoil. Generational divides rise up like icy peaks. 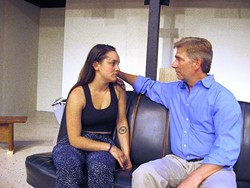 Mom was a kid herself when she got pregnant with Li’l Bit, and grandma was a child bride who’s now more interested in scripture than reality. Aunt Merry is in denial about her husband’s troubling behavior, which includes frightening war flashbacks. Grandpa is an ignorant sexist. Everyone is lost in their own issues, and no one takes interest in Li’l Bit except for her uncle, who is as manipulative as he is lost. On the outset, it appears that everyone loses. However, there may be a brighter side to this twisted tale.

Director Ron Clark said he understands the gravity surrounding such serious issues as sexual assault, incest, and neglect. However, he also knows that the play—like life—is about so much more than tragedy. The emotional meat of this work lies in Li’l Bit’s very human struggle to see past the things that destroyed her, to understand what ruined family members’ lives before they went ahead and ruined hers.

“I love this play. Ms. Vogel fearlessly explores a dangerous subject with extraordinary compassion and humor to tell a unique story about one of our closely held taboos,” Clark said. “Like all great dramatists, she gives us a story that raises thorny questions and compels us, the audience, to come up with our own answers.”

Don Stewart plays troubled Uncle Peck, a deeply flawed man haunted by past and present horrors. He seeks love and connection desperately, and in the process, damages Li’l Bit forever. As the young girl develops into a teen, she’s confused by what the relationship means and her part in the madness. More driving lessons would seem to mean more independence, but the teen can’t seem to pull the brakes on the inappropriate relationship. 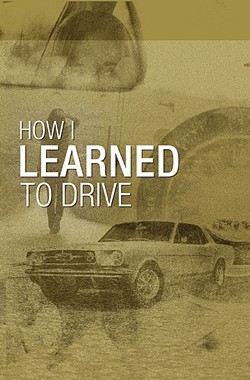 “The older I get, the more I lose interest in black and white characters,” Stewart said. “I’m interested in gray characters; that’s what’s intriguing to me. The morality of the play is never in question, but it’s also a love story. The challenge was, ‘How do we bring this to life?’ It’s an interesting journey for me, and there are a lot of discoveries in every rehearsal.”

“After the curtain falls, we have to admit that everyone we just met in the world of the play is deeply human,” Clark said. “All of the major characters are so deeply flawed and carry the scars of abuse that are bound to skew their view of the world. We are lucky to have this opportunity to share their burdens and pain, and then, hopefully, emerge back into our own healthier families and community.”

Hayley Thomas is as flawed as the next human at hthomas@newtimesslo.com.