How many landscapes can one barn hold?

Check out this new studio in Corbett Canyon

The trolley doesn't pass by CorkStop Studios. You won't find it in the row of galleries on Embarcadero or in downtown San Luis Obispo. Instead, the large red barn home to artists Carol Paquet, Xenia Madison, and Anne Stahl is located in Corbett Canyon, down a winding green lane and past two cattle guards and one bump gate. Horses meander through green fields, inspecting the occasional visitor, and jovial dogs offer a warm welcome. It's an unusual venue for an exhibit, set for May 11, but it's the perfect studio, according to the trio who creates there.

# The space, a 2,500-square-foot building, was constructed from 6-inch foam walls with steel support, raised like any other barn though on an extremely windy summer day. Solar panels provide the studio with extra heat and water, making it environmentally sound. Paquet and her husband, Jean, have been living in the barn for a year and a half. Originally, it was supposed to provide temporary accommodation while a proper house was constructed, but they enjoyed it so much they decided to stay. The environment is so spacious that Paquet wanted to share the studio space with other artists, preferably fellow painters whose work would complement her own. She quickly found exactly what she was looking for.

"We all work within an abstract landscape genre," she explained. "For me, it's important to be surrounded with work that I respect because we're promoting ourselves as a group."

Paquet met Stahl through a mutual friend and artist while looking for artists in need of a studio. For Stahl, who's been looking for a studio for several years, the barn was an unexpected discovery.

# "Studio space is so sparse in this county that it gets soaked up so quickly," she said. "I've kept my eyes open for five years and there's just nothing like this."

Paquet met Madison at the teVelde School of Music in Arroyo Grande, while waiting for their children. They began talking, and almost immediately Paquet asked Madison if she was an artist. The timing was serendipitous as Madison had just resolved to wait patiently until she found the perfect studio. The quiet setting was exactly what she'd been hoping to find.

"The studio has amazing light and it's just a beautiful, peaceful place to work," said a happy Madison.

With few distractions, and those in the form of a horse or dog wandering past the window, the artists are free to work, to unleash their unique perspective of land and firmament. Slices of grass and sky revealed through large windows provide fresh inspiration. The location is a plein air painter's dream simple, sweet, pastoral but the group is striving to build a reputation as a collective of contemporary, abstract painters, which definitely excludes plein air from the studio's future.

Part of promoting themselves as an artistic unit means giving and accepting criticism, a challenge that hasn't led to any negativity, the three insist. 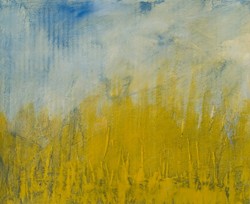 # "When you're in college you work with all these other people, and once you leave college, there's this blank," Stahl said. "And anyone who's ever done it before knows it's better to work with other artists if they're the right artists."

Though their work is similar and their personalities mesh surprisingly well, each artist remains an individual with a distinct background, inspiration, and style.

Paquet and Stahl are, quite literally, citizens of the world. Stahl grew up in Germany and attended a school for art and design in an old monastery in Ireland. Her work sold well and she discovered that artists there are accorded the respect they fail to receive elsewhere. Moving to the United States created a whole new set of challenges for the painter, who works several jobs so she can also create her art.

Paquet was born in what is now Zambia in southern Africa, and has lived in several major cities, including London, Los Angeles, and Johannesburg. Despite her lifelong interest in painting, she suspected it was impossible to make a living from fine art, so she established a career in advertising. In 2000 she began painting full time. 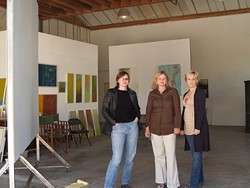 # As a child and teenager, Madison envisioned herself as a performance artist a dancer transforming her body into a canvas. What the young San Francisco resident didn't know was that art would play a huge role in her life, but not through the medium she expected. Personal tragedy served as the catalyst for Madison's painterly ways. The death of her grandmother with whom she was particularly close strangely melded with the task of painting her new kitchen, and she discovered that painting was a method of connecting with her grandmother.

"I started exploring and teaching myself," Madison explained. "I started painting representational stuff and still lifes. Then, I started to get a little confidence because my family would see it and make positive comments. And, being obsessive, I got addicted to painting. This is what I want to do."

The trio has a lot of ideas about the studio's future, including using it as a base to host retreats, workshops, and maybe even international guest artists. They're also considering purchasing an etching press for printmaking, and are keeping a blog as a discussion forum about local arts events. Still, they're reluctant to make those plans permanent until the first show is underway.

And before they could invite anyone whether fellow artists or art collectors to their rural studio, they needed a name for the space, an identity for the location and their collective work. Paquet selected the name CorkStop Studios to reflect the wineries dominating the landscape around them. In particular, CorkStop Studios has a special relationship with Wood Winery, which is providing wine for the opening reception on May 11.

Overall, the three artists may be starting off slowly, but they're aiming high.

"I was raised with a first-class mentality, not in terms of money, but my family liked it when you took things seriously and [Paquet] is doing that," Madison concluded.

INFOBOX: One night only

CorkStop Studios and its three resident artists Carol Paquet, Xenia Madison, and Anne Stahl will show its first exhibit May 11 from 6 to 9 p.m. CorkStop is located at 1250 Judith Lane in Corbett Canyon. Subsequent exhibits will be held every few months, but art lovers who just can't wait that long can arrange to view the trio's work by appointment. For more information, visit www.corkstopstudios.com.