How one chef found Zen at Windrose Farm—and how you can, too, at Heirloom Fest

Be one with the tomato

Join Windrose Farm for a celebration of heirloom tomato season with a festival on Saturday, Sept. 23, from 2 to 6 p.m. and multi-course dinner featuring chef Julie Simon this Sept. 24 from 5 to 8 p.m. For tickets go to farmsteaded.com or windrosefarm.org.

Chef Julie Simon has a fresh outlook on life. It's written in her hands—rough from trellising dozens of tomato plants before noon. You can hear it in her voice: The humble tone of someone who's learning—slowly, painstakingly—how to farm. Spoiler alert: It's not easy, but it is ridiculously rewarding.

"I eat humble pie for breakfast," Simon said of her new venture at Windrose Farm in Paso Robles. "It's difficult, but I get to see the sunrise and sunset every day, and I get to be present in the moment. I would not trade that for anything." 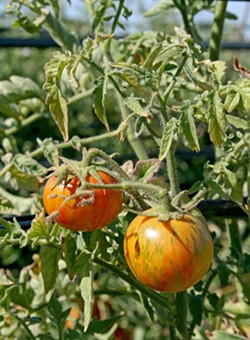 You probably know Simon as the Parisian whole-animal, whole-ingredient chef behind the seasonal dishes at Foremost Wine Company in SLO. When the frantic pace of kitchen life caught up with her, a big change was in order.

"It's like your body knows before you do," she said of the eventual burnout. "I wanted to dedicate the rest of the year to learning new skills and growing."

As hard as the chef knew it would be to cast off the duties at the restaurant, she needed room to find her roots. As it turns out, crops aren't the only things that need a regular dose of sunlight, oxygen, and soil to thrive.

Windrose Farm was calling in the form of a seasonal apprenticeship. Simon answered with enthusiasm.

Located east of Paso Robles near Creston, Windrose Farm is a mainstay of biodynamic, organic farming on the Central Coast. Even if you cannot picture its fertile fields in your mind's eye, you've probably eaten the produce grown there.

Owners Bill and Barbara Spencer have been bringing fresh produce to farmers' markets since 1993 and there is a reason these plums, lettuces, and cloves of smoked garlic are so beloved by seasonal chefs across the state.

As Simon says, "They've been nourishing the community for years. I remember when Bill would come in to the restaurant every Friday with produce. Sometimes I wouldn't even know what I was going get, but I was so looking forward to whatever it was."

With an incredible microclimate, the farm is tucked away in a valley forged by ancient rivers. This fertile land features 50 acres: a dozen are in vegetable rotations, six in apples and stone fruit, and five are dedicated to pastureland for sheep. The rest of the land is proudly untouched: deer, birds, beneficial insects, and bees keep the web of life humming.

Simon is quick to underscore the fact that she's only an apprentice on the land, learning everything she can from the hardworking Spencers, the unofficial king and queen of organic farming in Paso Robles. They are the gurus and she is the newbie.

"I live on the farm during the week, and it's truly off the grid. I've taken on many different duties, and I am fortunate to be learning so much," Simon said. "Barbara focuses on the chef's garden, and Bill does a lot of the fieldwork. We rise early in the morning and tend to the fields, picking whatever needs to be picked. We don't harvest anything later in the day, because the heat damages the herbs, the fruit." 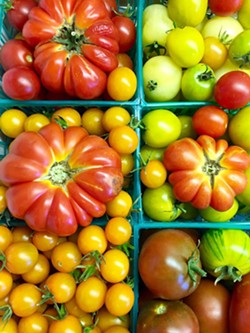 What has the team been picking lately? Well, that's obvious. Looking out at the Spencers' heirloom tomato fields you'll see all kinds of sumptuous colors coming into play, not unlike nature's fireworks display.

Orange, black, red, striped, purple, green, and yellow—they're all ripening now, and they'll all be served up fresh at the farm's annual Heirloom Tomato Festival scheduled for this Saturday, Sept 23. Slurp down juicy slices to your heart's content, pick up farm provisions, learn planting tips, and meet the farmers themselves.

On Sunday, Sept 24, Simon will don her chef's coat once again, although her shovel and work boots are never far from reach.

The aspiring farmer and celebrated chef will prepare a fabulous seasonal meal that incorporates the juiciest Windrose Farm heirloom tomatoes and estate lamb.

More than simply giving folks a taste of what's delicious on the farm, Simon said she wants to bring forth a full, well-rounded experience, not unlike the one she's been getting Monday through Friday.

When you spend literally six hours a day trellising tomatoes, you notice a perfumed scent wafting from the leaves.

"It's not something you'd notice if you just picked up a tomato and sniffed it," Simon said. "I want to bring people into what it is really like to live and breathe Windrose Farm."

As it turns out, a tomato isn't always just a tomato. Sometimes it's even a teacher, a Zen master.

"Bill and Barbara have this ridiculous amount of respect for that one tomato," Simon said. "That is what this experience has really taught me. This festival is not just produce, or one disconnected piece of the puzzle. It's about serving up the whole system and savoring our place in it." Δ

Hayley Thomas Cain thinks heirloom season beats Christmas by a mile. She can be reached at hthomas@newtimesslo.com.