How Paso won the race 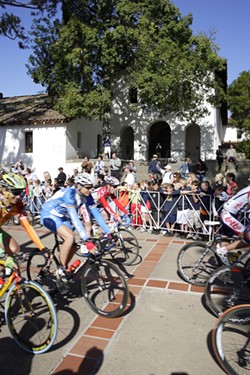 The route was described as both brutal and epic. Television viewership spiked as people tuned in to watch bikers wind the grueling 135 miles from Seaside down Highway 1, through Big Sur, over the Bixby Bridge, and past Hearst Castle to San Luis Obispo.

The route had even earned its own name: the “Queen Stage,” and had been a feature of the Tour of California since its start in 2006. For the first two years, conditions were Central California-style perfect, but in 2008 the route took on more mythic proportions as riders slogged in a chilling rain and gusting headwind. They were so slowed that people who turned out in bike-crazed SLO expecting to be just in time to watch the finish instead found themselves with more than an hour to kill, passing the time by fiddling with the inflatable thumpers handed out by race organizers.

Levi Leipheimer, a two-time winner of the race, told reporters after that the day’s suffering ranked it as one of the top three worst days he’d ever had on a bike. Some riders grew hypothermic, and withdrew. Famed cycling commentator Phil Liggett described the day as “absolutely diabolical.”

The soggy crowd finally got their reward, however, as a young rider from Canada, Dominique Rollin, gutted out a muscular solo victory, breaking away from the pack in Morro Bay and fending off a more experienced group of chasers all the way to SLO’s downtown finish.

For bike race fanatics, such heroic days are remembered for decades.

And yet as the race returns to the area for the 2009 race Feb. 19, there will be no Big Sur television panoramas, no Morro Bay breakaways, and no crowd-lined SLO finishes this year.

Paso Robles has won the Queen’s crown. Race organizers made major changes in the route of the Tour of California for 2009 and, although San Luis Obispo once again bid for the right to host this year’s stage finish, it was instead awarded to the City of Paso Robles, that upwardly mobile darling of the travel press and wine tasters that is increasingly challenging San Luis Obispo for tourist dollars and economic activity. The route will travel to Paso along 46 East from Visalia.

The Tour that begins on Valentine’s Day has chosen a new suitor, and many in San Luis Obispo would be lying if they said it doesn’t hurt a little bit.

When asked about the extensive changes to the route for 2009, Andrew Messick, president of AEG Sports, which owns and runs the Tour of California, told reporters they were intended to “better showcase the great state of California.”

That, however, is not the same message local organizers received.

Each city that hosts a tour start or finish has a local organizing committee. Paso Robles Police Chief Lisa Solomon is the leader of Paso Robles’ committee.

In her view, Paso Robles wasn’t as much the victor of a bidding war against San Luis Obispo as the beneficiary of forces outside of either city’s control.

“Part of the issue of why the race is coming to Paso has to do with logistics of the race itself,” she said.

Solomon said she was told the race’s major sponsors, seeking more marketing bang for their dollars, wanted the race to have more stops in the more populated Central Valley region this year rather than stops along the more scenic, but less populated, Central Coast.

Once organizers made that choice, if they were going to have a SLO County stop, “we were kind of the logical choice” given existing routes from the valley, she said, adding: “I also think they were just ready to do something different.”

For their part, race organizers mostly declined comment about the switch, praising the SLO route and the new Paso route as well.

Solomon was careful to avoid focusing on competition between the two cities, saying instead that she’s happy the county has kept a tour stop.

Still, it’s clear city leaders consider hosting the race to be a plum.

“This is really an international spotlight being shined on our community and a very good return on our investment,” she said. “It’s not just about the day that folks spend in our town; it’s about this national and international coverage that we’re going go get.”

What is the value of that sort of coverage?

It’s difficult to value precisely, but officials with the City of Santa Rosa place the marketing value of hosting the race at about $700,000 and tour organizers claim that it drew 1.6 million spectators in 2008, resulting in an economic impact of more than $100 million for tour stops.

Still, those figures are the stuff of marketing materials, far more ephemeral than city budgets.

San Luis Obispo’s longtime mayor, Dave Romero, describes himself as the city’s “first Bike Czar” dating from his work as public works director in the 1970s, when the city first started creating streets with bike lanes. In more recent years, city officials have undertaken a more involved commitment to cycling, piecing together a network of off-street trails and establishing a dedicated bicycle boulevard downtown.

Romero said he’s seen interest in biking ebb and flow, hitting a plateau about 15 years ago, then waning until a renewed spike in interest in recent years. From the televised Jeep King of the Mountain bike race at the Madonna Inn to the funky art bikes of the Tall Bike Posse, to the Downtown Criterium, to the monthly Bike Happening, where hundreds of bikers devour the downtown after Farmers Market, these days bike culture seems to practically drip from the city’s taps.

It’s true that Paso Robles is home to its own share of bike fanatics, with inspiring vistas and peaks that draw road-riding bike tourists and mountain bikers alike. Yet it hasn’t yet developed the commute-to-work infrastructure or encouraged the sort of bike-as-lifestyle following as SLO. It is, in other words, more the sort of place where people put their bikes on their cars before they bike rather than eschewing cars entirely.

So, with so much bike culture around, it’s a road-rash sort of sting for many in San Luis Obispo to lose such a visible symbol of the city’s bike mania. Adding just a little asphalt to the wound is the fact that seven-time Tour de France champion Lance Armstrong’s entry is certain to draw record viewers and large crowds.

Floyd Landis, who won his own Tour de France only to have it stripped from him for a doping violation, is also using the race as his comeback vehicle.

The new Paso route will feature stark differences from the scenic SLO route of years past. The first 100 miles out of Visalia will be across the vast, flat San Joaquin Valley floor. The Tour’s official route description warns “the riders will have virtually no protection from the wind, creating a challenging ride.” From there, things should get more scenic, as riders will roll past ranchlands and open space on a route that is billed as a fast 30-mile sprint to the finish in downtown Paso.

With its increased focus on the Central Valley and a here-and-there staging that is less a cohesive tour than a sampling of the state, the route changes have been met with some disappointment in the blogosphere. One cycling fan wrote, “All in all, this course is a downer. There are some really weak, unpopulated stages in this edition. I’m not inspired.”

But that’s not how one local race maven sees things.

Shaba Mohseni is owner of event production company Nimble Creative Events, which stages the SLO Criterium as well as local cycle-cross races. She’s also a racing fan, and sits on the board of the San Luis Obispo County Bike Coalition.

Although she helped promote the Tour when it was in SLO, she’s not disappointed or surprised to see it move to Paso.

“It’s a huge event for California,” she said. “It is the capstone event for American professional cycling right now, so people are bidding, and things change.”

Just as the Tour de France changes routes regularly, she said people shouldn’t be surprised that the Tour of California does the same, adding that for real fans the changes offer viewers new sights and give riders new challenges.

“I see what [organizers] are doing, and I like it,” Mohseni said.

Still, she allowed: “It’s a bummer for San Luis.” She said the Seaside-to-SLO route was a fan favorite because of its amazing views and, last year in particular, the epic struggle that occurred.

This year’s tour is being looked at as one that will highlight time trials and offer fast, flat races and dramatic endings for sprinters.

Still in the county

If San Luis Obispo City did “lose” the race to Paso, it’s also clear that officials didn’t try quite as hard to keep it this year.

Hosting a stage isn’t cheap, and costs grew sharply over the three-year span of the race. By the third year as host, enthusiasm from city officials had seemingly waned.

For this year’s tour, the city was expected to provide 145 hotel rooms for race officials and crew, along with possibly subsidizing the costs of another 400 rooms for teams, riders, sponsors, and others.

According to a staff report to the City Council, race costs for hosting the tour were $37,300 in 2008, a price that was paid with a combination of money from sponsors, leftover money from the previous year, and grants from both the city’s promotion board and city funds.

The city tried to limit its costs in its 2009 bid. City officials proposed making SLO either a less-expensive stage start or, if it were to be a stage finish, one with conditions attached to limit costs.

According to the city, tour organizers contacted SLO after receiving the proposal to discuss ways to lower costs, and indicated they still wanted the city to host a stage finish.

City organizers said sponsorships had become harder to find, in part because of the economy, but also because of sponsorship restrictions placed on cities by tour organizers.

For example, because Rabobank is a statewide sponsor, local banks are not allowed to sponsor an individual leg of the tour. In San Luis Obispo, such restrictions limited the pool of potential sponsors who could spend thousands of dollars for the privilege.

In terms of straight dollars, hosting the race came to be considered a money loser, although SLO officials still valued its marketing might, noting that it would be hard to track which visitors would later visit the area, spurred by attention brought by the race.

In San Luis Obispo, local organizers warned City Council leaders before their bid was made that they were “committed to providing the best event possible, while keeping in mind there may be limited fiscal resources available.”

Said Romero in a recent interview: “We were starting to dig our heels in a little bit, but we were still very happy to have them come in.”

In the end, the committee asked the city to pledge $20,000 but warned that even that might not be enough if sponsorships fell through.

The city has also been seeking additional individual sponsors willing to contribute $200 each to join a Tour of California booster club.

In San Luis Obispo, fans will merely have to drive, or bike, a short distance north to experience the race once again this year.

Yet that’s not enough for some SLO city boosters.

“It was quite an asset,” sighed Romero in his office. “I would love to have it back.” ∆

Managing Editor Patrick Howe has too many bikes and too few legs. Contact him at phowe@newtimesslo.com.