How shall summer's honey breath hold out?

All the world’s a stage, except, apparently, Bellevue Charter School, which recently terminated its five-year relationship with the Central Coast Shakespeare Festival. In mid-May the school’s principal, Brian Getz, informed Artistic Director Zoe Saba that the school board had come to the conclusion that the festival was an insurance liability, and the school would no longer host the outdoor event. The announcement came a mere two months before the festival’s July 11 opening night. 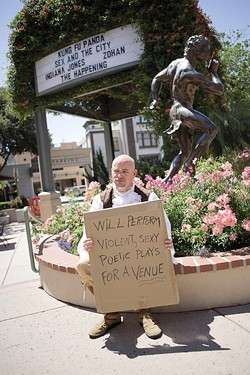 According to Saba, the issue is not the board’s decision, but the fact that it was delivered with no warning whatsoever. Because the festival’s insurance policy has never changed, and Saba was unaware of any particular instances that might have caused the school board’s concern, the decision seems to have materialized out of thin air.

“It was like they pulled the rug out from under us,” said Saba. “We had always provided the insurance policy that they asked us to have. My shock was at the late timing of it. At the point that we received this notice we had not been brought into the conversation.”

Saba offered to meet with the board to discuss its specific concerns which, she insists, were never made clear to her. But as of yet she has not had the opportunity. (Principal Brian Getz did not respond to repeated attempts by New Times to contact him.) And without enough notice to identify and secure an alternative venue, Saba had no choice but to cancel the 2008 summer festival, which was to feature Treasure Island and The Tempest, both of which were cast in April.

This isn’t the first time that the nearly 20-year-old company has found itself homeless. The festival was founded in 1991 by a theater company called Artemis. For its first six years, the festival took place in the Leaning Pine Arboretum in Cal Poly’s ornamental horticulture unit. In 1997, the festival was established as its own company, independent of Artemis. However, in 1998 Cal Poly’s rental rates tripled and the prohibitive costs forced the festival’s first move, to the SLO Little Theatre. The indoor venue served as a home to the festival through 2002, when one of the actors—whose wife happened to be a teacher at Bellevue Charter School—suggested the outdoor venue.

The schoolyard was, according to Saba, very nearly ideal. The festival paid the school

a percentage of its profits from each season—the perfect financial arrangement for a small nonprofit theater company. The space came equipped with access to electricity, plenty of parking, storage space for equipment, and space for the actors to change between scenes. And no one could argue that the space wasn’t beautiful, with soft summer breezes at dusk and plenty of trees. The ambiance was a significant aspect of the festival’s character and identity, according to Saba.

“We’re something different for theater-going audiences,” she explained. “It’s more relaxed.” Families could pack a picnic, sprawl out on the grass, and shiver with delighted horror at Lady Macbeth’s bloody machinations.

But for now, Saba and Cindy Totten, who was scheduled to direct The Tempest, are left to reflect on the season that would have been. By the time Saba received the fateful phone call, the festival’s guest director had already purchased a plane ticket, casting was complete, and royalties for Treasure Island had already been paid. Totten teaches at Eckerd College in Florida and decided to fly to San Luis Obispo as planned, despite the fact that the season was no longer moving forward.

“Everyone was planning his or her summer schedule around the Shakespeare Festival,” she explained.

But besides the inconvenience, a significant portion of their disappointment is tied to the visions they had dreamed up for this summer’s productions—visions that now seem shipwrecked, much like the characters in their two plays. Totten planned to play with gender, having cast a woman in the role of Prospero. Gender-bending is nothing new to the Shakespeare Festival, Saba points out, adding that Totten once directed an all-female production of The Taming of the Shrew for the festival. They had secured a stage combat and swordplay instructor. And a pirate was going to manipulate a puppet parrot, a theatrical embellishment that delighted Saba.

Hopefully, these are visions that Saba will be able to resurrect in the summer of 2009. But keeping the festival outdoors, where it belongs, is proving to be a challenge.

“We don’t have any ideas,” she admitted. “We would love for anyone who has any land or space to contact us. We want to produce this festival here. We’re committed to doing this and we’re available to ideas and solutions.”

The silver lining, gleaming feebly like a half-formed patronus, is that Saba and Totten won’t allow their summer to go to waste. They are discussing organizing a festival board, beginning fundraising efforts, and cleaning out storage facilities. This setback could, they hope, be an opportunity to rebuild, to find a better venue, a better future.

INFOBOX:  What people are saying

‘I see this as yet another example of “art tongue-tied by authority,” if I may borrow a phrase from the Bard’s 66th Sonnet.’

‘It truly is a loss to our community … The company provided an outlet for local artists, giving them the unique opportunity to perform in repertory. Their role was vital to the artistic environment of San Luis Obispo County.’

‘Central Coast Shakespeare has done some terrific, thrilling work outdoors in Avila over the past several summers. It's work that deserves to be cherished and celebrated. I have every confidence that we'll be back stronger than ever once we've found a new home, quicker than you can say Stratford-Upon-Avon.’

Arts Editor Ashley Schwellenbach says if you don’t like it, give ‘em hell. Arm yourself for philosophical war at aschwellenbach@newtimesslo.com.