How to avoid the cliff 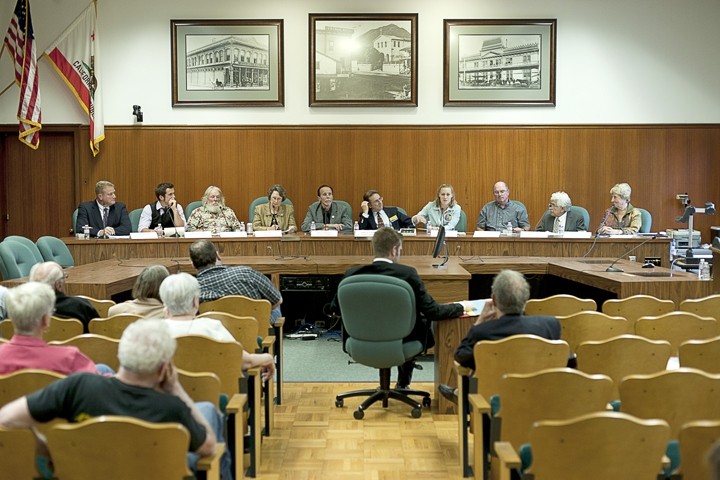 As the election for the office of San Luis Obispo mayor and two City Council seats heats up, New Times set out to examine what the candidates say they’ll do about the most pressing issue facing the city: the difficult financial future those who get the votes will soon have to deal with.

SLO is facing an unholy trinity of declining tax and fee revenues, escalating pension payments, and rising employee pay increases, all of which threaten to drive the city to financial insolvency.

Should they win a seat, the candidates will soon have to face this new reality. Unless there’s a dramatic and swift economic recovery, future councils will have to make very difficult decisions on how to deal with a severe fiscal crunch.

Paul Brown, a former San Luis Obispo city councilman and bar owner and now part-time police officer, said too many people think of the city’s financial problems as a blip on the horizon.

“The best analogy for this is we’re on a mesa and we can see another mesa over a big ravine we’re headed for,” he said. “A lot of people want to keep going and hope someone will spontaneously build a bridge to save us.”

Brown’s prescription to deal with the financial crunch is for the city to live within its means—cut down on the spending—and lower employee salaries and benefits to bring them more in line with the private sector.

“We have to get the message across to the [employee] unions that a lot of people aren’t working and others are working a lot less,” Brown said. “We’re just not going to be paying as much as we used to.”

He doesn’t believe raising fees to help balance the budget is the answer, but he wouldn’t entirely rule out the option.

“Most businesses are in terrible shape, and more taxes and fees on them is not a good idea,” he said.

Jan Marx, a current city councilwoman running for mayor who has degrees from Stanford and Columbia universities, seems more confident about the city’s financial outlook. Marx said though the major challenge in the next two years will be balancing the budget, she believes the city is in sound financial shape.

“We are not in danger of bankruptcy,” Marx said. “But to remain financially sustainable over the long term, we must be ready to take creative corrective action.”

Marx said she had faith in the budget process and efforts by the city manager’s budget task force to come up a plan that can maintain the good financial standing, pointing out that the budget is currently
in balance. She said she believes the
council must cut the budget and stretch remaining dollars.

Though Marx is supported by the police and firefighters unions, she said a two-tier pension system might be necessary to deal with future ballooning pension costs.

Andrew C. Farrell, a Cal Poly student and three-time Week of Welcome orientation leader running for mayor, said he has three solutions to deal with the financial crisis: encouraging economic development, cutting down on delays for construction permits, and lowering salaries and benefits to a level that is both “equitable compensation and affordable for the city’s residents.”

Donald E. Hedrick, a retired welder running for mayor, said he has a simple way of dealing with budgetary issues: “Let the city go bankrupt. It’s pretty simple. Let’s rewrite the workers’ contracts. We don’t have enough money coming in, and we pay people too much in these hard times.”

The candidates for City Council also have varying ideas for dealing with the budget.

Terry Mohan, a truck driver and constant attendee at City Council meetings, said employee salaries and pensions need to be reviewed in light of the economic downturn. He pledges to hold down unnecessary spending, including what he calls wasting resources on development that may never come. He cites the Nacimiento water project as an unneeded waste of money that would only be required if the city population explodes in the next few years.

Arnold Ruiz concentrates most of his campaigning efforts on the restoration of Laguna Lake, but he said the solution to the city’s future money problems is simple: “Cut, cut, cut. Let’s start at the top, then move to the middle managers, and then you need to cut the hours of the folks at the bottom.”

Dan Carpenter, a retired businessman who has the support of the police and firefighters unions, said he would help stop out-of-control spending.

Carpenter added that he didn’t want to point the finger at the bargaining units: “There’s no reason they would want to break the bank.”

Kathy Smith, a former councilwoman who also has the support of the police and firefighters unions, said she would push for new ways of maximizing revenue as well as minimizing costs. She approves of the way the city has combed its rolls for fees it hasn’t collected; for example, sending letters to renters who haven’t bothered to get a business license. She also wants the city to innovate ways of both stretching the budget and finding other people to contribute to the city.

“When push comes to shove, the sworn unions will be willing to do this as a team,” Smith said.

Councilman Andrew Carter has made the city’s financial outlook a centerpiece of his campaign for another term. He supports making benefits a two-tier system and having employees pay for more of their pension costs; the city currently pays for many of the employees’ portion of their pension costs. He was the only candidate who said he would actively campaign for a proposition on the ballot to get rid of binding arbitration.

“There is no magic purse,” he said.

“This is a problem we need to deal with.”

Andrea Miller, a candidate for City Council, did not return New Times phone calls in connection with this article.