How to build a pizza empire: Three decades and beyond with Woodstock's wizards Jeff and Laura Ambrose

So you want to build a pizza empire? Listen up, punk. You might think a ’za is a ’za: sauce, cheese, dough, a handful of toppings. You’d be dead wrong.

Pizza may be the universal symbol for “good times,” but it takes a lot more than a lot of high-fives and big dreams to get where Laura and Jeff Ambrose are today. 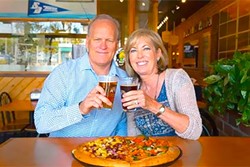 As owners of seven Woodstock’s locations—San Luis Obispo, Santa Cruz, Pacific Beach, San Diego, Chico, Davis, and Isla Vista—you could say the the Ambroses are the unofficial darlings of broke college kids across the Golden State. And with more than 30 years of living, breathing, and evangelizing Woodstock’s, the pizza power couple has also learned more than a few industry secrets (some of which they’ll share here).

The couple caught up with New Times by phone, while lounging on the beach in Kauai. No joke. Before you get royally jealous, just remember that they’ve earned this vacation. Back in the day, Jeff was that broke college kid. He worked as a delivery guy for the original Woodstock’s restaurant in Corvallis, Ore. (with all the mayhem of the job you might imagine). It was the late ’70s, after all.

“As a delivery driver, you come into touch with all kinds of different people and situations,” Jeff said of those hazy days. “Someone would say, ‘I don’t have money for a tip, so how about a beer or a bong hit?’ I never did those things because it wasn’t the smart thing to do, but you can imagine that some other delivery drivers might.”

As it turns out, all work and no fun on the job made Jeff stellar management material. The Oregon State student was asked to move down to Santa Barbara to help Woodstock’s founder Chuck Woodstock open a new location—the first twinkle of the possibility of an empire to come. Sadly, Chuck didn’t get to see what his handiwork would inspire. In 1985, he and business partner Mike Chew perished in a private plane crash in San Luis Obispo.

Despite the tragedy, Jeff didn’t step away from the pizza joint or his bosses’ dream. Eventually, he was promoted to president of the company, and he got to work. If only Woodstock could see that young delivery driver now.

“Chuck very much lived in the moment and had a very full and fun life. I don’t know that he would have kept it going for another 36 years,” Jeff said. “It’s a commitment we’ve continued because we feel connected to the communities that we’re in and we want to be part of that and give back.”

The secret to Woodstock’s more than 40 years of longevity? That’s simple. 1) Catering almost exclusively to college communities, and 2) keeping an eye on quality, even as the industry changed dramatically (Pizza Hut, Domino’s, California Pizza Kitchen, and the like have all had their moments). Over the decades, dozens of pizza places have come and gone in SLO, but Woodstock’s continues its tradition of hand tossing dough for all to see, using a fresh, from-scratch sauce, and keeping the
toppings choice.

That may be true, but a slice of Woodstock’s pizza will still only set you back a few bucks. Add a pitcher of beer, and you’ve got a really cheap date.

Laura has her own advice for restaurateurs, and she’s not sugar coating an ounce of it. Mistake one is fairly obvious: “I love to cook, so I’ll love owning my own restaurant!”

“You like to cook for 100 people at once, every day, all day long? The novelty wears off quickly, so plan to hire others to do the cooking for you,” Laura said. “Another pitfall comes from thinking that no one else can do the job as well as you can. This is a sure prescription for burnout. You simply can’t do it all, which means that it’s imperative to set up systems where you can turn your back/walk away and trust that your business will be run well. Consider sharing ownership with your management team.”

Speaking of the Woodstock’s team, bet you didn’t know San Luis Obispo Mayor Heidi Harmon once wore an apron and hand tossed Woodstock’s signature dough. That addictive cinnabread? Created by a Cal Poly student, as are many of the restaurant’s unique flavor combos. When you eat a lot of free pizza, you generally come up with some cool variations, Jeff said.

The idea of college students eating a “fourth meal” is not new (munchies happen after studying or late night partying, naturally). However, the SLO Woodstock’s locale isn’t just a place for students to play pinball and gulp down slices between classes.

“The great thing about SLO is that business doesn’t die by the university. It’s also supported by tourism from the valley,” Jeff said. “That’s why San Luis Obispo has continued to be one of our most successful locations historically over the last 35 years.”

Added Laura, “We love to see the alumni come back over and over again and make it a point to stop at Woodstock’s. We value that relationship.”

Students will have another reason to gather for a slice of Woodstock’s in 2017: The owners are planning to expand the San Luis Obispo location with an additional seating area set up to “feel like the coolest backyard ever,” according to Laura. Intrigued? You should be.

And although you will find all kinds of interesting seasonal pizzas (winter butternut squash, March Madness meatball) at Woodstock’s all year long, there is one thing you’ll never find atop their signature slices.

“I am not going to be putting kale on my pizzas,” Laura said. “People come to us because they know the food’s good, not just trendy.”

In that way, it pays to be a little uncool. It pays to be authentic. What you see is what you get at Woodstock’s, and that’s a sentiment we don’t often see in a highly branded world.

“We want to make sure every photo we use of our product is real, and every product that goes out to the public should look like the photo,” Laura said. “In this way, we want to convey the kind of place Woodstock’s is, and the kind of people we are.”

The kind of people they are? The kind that don’t Photoshop their crust to make it look “perfect,” or fall in line with whatever cool new superfood is “trending now.” In short: They’re the kind of people you’d want to share a pizza and a beer with.

Hayley Thomas Cain would like another slice of whatever they’re having at hthomas@newtimesslo.com.