How to get Dad to drop his pants

This Fatherâ€™s Day, remind the man in your life that his lifeâ€™s at risk

How do you get a guy to stop in for his yearly prostate exam? Offer him snack food and the TV remote.

While that answer may sound like a punch line, itâ€™s one that the 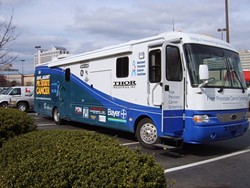 # National Prostate Cancer Coalition hopes will save menâ€™s lives around the stateâ€”and in San Luis Obispo.

In an effort to combat prostate cancerâ€”which will kill one in 32 men alive today in the United Statesâ€”the coalition is launching an innovative screening program aimed at attracting even the most stubborn bloke: a 39-foot recreational vehicle painted like a racecar, in which guys can also watch a large flat-screen TV, surf the net, and enjoy free food.

According to the coalition, though American men commonly wear their seat belts, theyâ€™re three times more likely to die from prostate cancer than from a car accident. Prostate cancer is as common as male pattern baldness. One in six men will get it.

Despite the devastating news, however, only around half of all American men older than 50 get tested for prostate cancer. The disturbing fact is that men have a 99-percent survival rate if the disease is caught early enough.

Early detection is the key to surviving prostate cancerâ€”and avoiding side effects associated with delayed treatment.

â€œMy doctor found the cancer during my annual checkup,â€? Clark said. â€œIt was found quickly. I had the prostate surgery, and because it was caught early, the doctor was able to spare the nerves.â€?

Current guidelines from the American Cancer Association recommend that all men older than 50 get annual testing. African Americans, overweight individuals, and men with a direct family member who has had prostate cancer are at a higher risk for the disease. The coalition recommends that these groups begin testing at 40.

â€œThere is no waiting, no appointments, and no insurance is necessary,â€? the coalitionâ€™s CEO Dr. Richard Atkins said in a statement introducing the mobile-screening program. â€œItâ€™s the way every doctorâ€™s office ought to be.â€?

The bus will begin visiting U.S. cities starting the week of Fatherâ€™s Day as part of the coalitionâ€™s â€œDo it for Dadâ€? campaign. In September, the rolling testing center is scheduled to offer screenings in the Los Angeles area, possibly followed by a stop in San Luis Obispo.

â€œWe are definitely taking a look at hitting San Luis Obispo and should have more information sometime in July,â€? said Jamie Bearse, a coalition spokesperson. â€œIf all men were tested, the death rate of men with prostate cancer would plummet.â€?

The coalition is also teaming up with local physicians whoâ€™ll conduct a two-part screening procedure: a prostate-specific antigen (PSA) blood test and a digital rectal exam. An elevated PSA test can lead to a prostate biopsy.

The coalition claims that no man will be left behind. Those who test positiveâ€”but who lack insuranceâ€”will be provided with the toll-free number of an agency that provides necessary help. Improving Access, Counseling, and Treatment for Californians with Prostate Cancer (IMPACT) provides treatment for low-income Californians who are uninsured or underinsured.

In 2000, California lawmakers passed legislation to provide low-income Californians with free prostate cancer screenings and treatment for those testing positive. At this time, however, funding is provided for treatment only.

â€œOver 750 men have received treatment since the program was implemented in 2001,â€? said Sarah Connor, IMPACT health team manager. â€œGovernor Schwarzenegger removed the programâ€™s funding, and the program closed down twice. As a result, Sen. Debra Ortiz sponsored legislation to make the program permanent. Ultimately, we would like to see screening available. If caught early, there is almost a 100 percent recovery rate.â€?

If these admonitions for early screenings are beginning to sound repetitive, think on this: What you donâ€™t know can hurt you. According to the coalition, men often wait to get tested until prompted by symptoms, which include trouble urinating and pain in the lower back and thighs. Unfortunately, prostate cancer has no symptoms in its early stages.

â€œIf you have symptoms, itâ€™s a sign that the disease has spread to other parts of your body,â€? coalition spokesperson Bearse said. â€œIf your reason for testing is due to symptoms, you have about a one third chance of living 15 years.â€?

After a patient is diagnosed with prostate cancer, his physician will go over a number of options that can include radiation, hormone therapy, watchful waiting, chemotherapy, and surgical prostate removal. Each treatment has a number of side effects and varying cure rates.

â€œAll the options can be overwhelming,â€? Man to Manâ€™s Clark said. â€œGuys are so macho. They donâ€™t want to talk about prostate cancer. We encourage men to talk to each other and to attend support group meetings.

â€œWe keep our eye on whatâ€™s going on with treatments and share our experiences,â€? Clark added. â€œWe provide emotional support for men and their partners. Itâ€™s a good place to vent, learn, and share.â€? âˆ†

On the third Monday of each month, prostate cancer survivors provide information to local men battling the disease. They meet at the Sierra Vista Recreation Center, 197 Santa Rosa St., from 6:30 to 8 p.m. For more information, call Jim Clark at 547-9340. In Templeton, a group meets on the last Thursday of each month at the Twin Cities Hospital Doctors Conference Room from 7 to 9 p.m. For more information, call Bill Huston at 925-2254.

â€¢ Soy. Doctors claim that soy can balance out testosterone levels in men, reducing PSA in the blood.

â€¢ Green tea. The beverage has been shown to slow the growth of cancer.

â€¢ Fruits. At least five servings a day can cut the risk of prostate cancer in half.

â€¢ Broccoli and cabbage. Three or more servings a day can reduce the risk of prostate cancer by as much as 41 percent.


Karen Velie can be reached at kvelie@newtimesslo.com.