How to learn two languages

Some local students are bilingual and biliterate before seventh grade 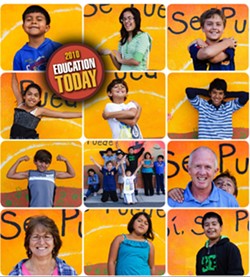 The old joke doesn’t apply to some students, whose schools focus on helping them master another language as well as English. These children learn to speak, read, and write in two languages by the end of sixth grade.

But don’t call it bilingual education, at least not in California. Voters in this state basically banned bilingual education by passing Proposition 227 in 1998. Seen by some as an anti-immigrant measure, it mandates that non-English speakers be “taught primarily in English” except with a written request from parents.

The parental waiver has opened the door for some schools to offer children an education that immerses them in two languages—English, plus Spanish, Mandarin, or Korean, to name a few of the choices around the state. Known as dual immersion or two-way immersion, the program takes advantage of children’s natural propensity for learning language. Schools are finding the method works well for the many California students who are learning English—a primary focus—and for English speakers who are learning another language.

Take Pacheco Elementary School in San Luis Obispo, the largest elementary in San Luis Coastal Unified School District and the site of a dual immersion program. Around half of its 500 students are considered Spanish speakers (and English learners) and half are English speakers (and Spanish learners). All are instructed in mixed classes, part of the time in English and part in Spanish.

They concentrate on reading and writing in their own language during the first three years, from kindergarten through second grade, while gradually learning to speak and understand the new language. By third grade, they’re ready to start learning to read and write their second language, and by the end of sixth grade they’re bilingual and biliterate.

In San Luis Obispo County and statewide, educators are focusing on helping children who are considered English learners, especially since standardized testing is all in English. Countywide, about 15 percent of K-12 students are English learners, with special programs offered to students at Georgia Brown Elementary School in Paso Robles—which also features a dual immersion language program—and at Oceano Elementary School in the South County.

For years, Pacheco Elementary has had a high proportion of English learners, especially after being designated a “newcomers’ school” for recent immigrants in the ’90s. Intrigued by the success of dual immersion programs for English learners elsewhere in the state, the school started its own program in 1996. Two-language instruction started with the kindergarten classes that year, expanding to the next grades in subsequent years.

“Our English learners do significantly better academically than English learners in the state as a whole, and continue to do well through high school,” said Mayfield, adding, “The model works.”

Walk into a Pacheco kindergarten class and you’ll understand everything the teacher says, whichever language is spoken. “Because half of the class is second language learners, we use a lot of pantomime, pictures, diagrams, charts, acting,” said Marlie Schmidt, who teaches first grade in English. “A lot goes on to make it comprehensible. We use song, poetry, chanting. My challenge is to have their language acquisition grow, in their native and in their second language.”

“We do an author study, looking at similar themes, vocabulary, and use of verbs in his books in my class in English,” Schmidt said. “Then my partner has the same books in Spanish, so the students recognize the rhythm and the story line, and they start with specific vocabulary.”

This collaboration means each teacher has twice the number of students, but they work so closely that it’s like co-parenting, Schmidt explained. “We share the successes and challenges of each student,” she added.

Teachers continue to collaborate with their partners in later grades too, as children develop their language skills. In social studies and math classes, they may study chapter one in English one week and chapter two in Spanish the next week, for example.

“It’s a very complex program we deliver, especially in first and second grade. It’s a very dynamic place to teach. We’re constantly looking at how we can deliver the program more effectively,” she said.

One key to success: involving parents in their child’s schooling. At Pacheco, you see parents helping in the classrooms, in the library, on the playground, and in the office.

“The parents are very interested in what their child is doing. They really make the time to be very involved,” said Karla Robles, a school counselor and a community liaison.

“We have higher Latino parent involvement at our school because language is not a barrier. They don’t have to worry about how they’ll communicate with the teacher or the principal,” Robles added. She also brings in speakers to talk to parents in Spanish on subjects such as Myspace, cyberbullying, and texting.

Cultural activities are another focus, with celebrations for Dia de los Muertos and Dia de los Niños, plus community nights such as a salsa contest with salsa dancing as well as the edible kind. Students also take part in plays, fundraisers, and folklorico performances throughout the school year.

“It makes students more aware, and allows them to appreciate other cultures,” Robles said. “That’s especially important in San Luis Obispo, where we just don’t have diversity, so you see a lot of racism. People are not exposed to another culture.”

Being bilingual is a bonus in California, she noted. “Employers will most likely hire someone who’s bilingual as opposed to monolingual. But it’s not just about future employment, it’s about learning about different cultures, and learning how to interact.”

Once the students go on to Laguna Middle School in SLO, they have the option of taking social studies in Spanish to keep up their language skills. When they reach high school, they’re ready to take Spanish 4 as freshmen. San Luis Obispo High School had to add Advanced Placement Spanish a few years ago, as former Pacheco students became sophomores.

Last year the first dual-immersion students who started the program in kindergarten graduated from high school. One went to Argentina for a year-long exchange program and came back even more fluent and confident in Spanish.

Another former Pacheco student who started in kindergarten, Karina Michel, graduated from SLO High in June. Although her family is Mexican, she’s considered a primary English speaker and is now bilingual and biliterate.

“In middle school we all took history class together so we could all keep running together, mainly kids who were learning Spanish who got good at it through Pacheco. In high school, with the same group of kids, we all took Spanish 4 and went on to AP Spanish,” Michel said.

As high-school students, she and her friends volunteered as peer helpers at Pacheco. “We went to hang out with kids who might have trouble at home or trouble making friends. We talked to them and helped prepare them for middle school,” she said.

Michel said she enjoyed using her bilingual skills to help kids feel better about themselves. Now she’s planning to attend Chico State University in fall to become a bilingual teacher.

Her parents are taking classes at Cuesta to improve their English. They didn’t have the opportunity to go to school when they were younger, and now they want to show their children the importance of education, Michel said.

“Sometimes my mom would be doing her homework and asked me for help. It’s really cool that I could help my mom with her homework, instead of her helping me. I feel really lucky. I think it’s a great program at Pacheco,” she added.

“I think it’s definitely kinda weird that there aren’t more schools like that. There are so many English learners who have to go to school without getting what they need to learn English. At Pacheco, they’re not losing their Spanish and they’re learning a whole new language. It will benefit them a lot,” Michel said.

English learners still face “an achievement gap,” according to Principal Mayfield. “We’re constantly working on closing that gap. It’s a complicated issue. It’s socioeconomic, it’s race, it’s helping kids feel connected to school and see themselves as students and learners who can go on to college.”

The school makes a point of involving Cal Poly students as volunteers, helping with special events or tutoring. “It’s really important for our students to have these role models who attend Cal Poly,” said Robles, the community liaison.

Mayfield said he believes in “the power of the program” and what it does for the kids. “The fact is, it helps English learners be successful academically all the way through high school. Plus it gives kids the opportunity to learn to truly communicate, and read and write, in a foreign language.”

His own son, age 10, has attended Pacheco since kindergarten and recently spent a week living with a family in Oaxaca, Mexico. “I’m glad as a parent to see my son operate in Oaxaca, and to have confidence in his interactions with another culture,” Mayfield said.

But two-way language immersion programs such as the one at Pacheco are “difficult to do and difficult to staff,” he said. “All schools are struggling, and to use two languages is even more of a struggle.”

Robles, the community liaison, said elected school boards are “the ones who make things happen or not happen.”

For teacher Schmidt, “It’s a very, very difficult program to deliver. These teachers have to go above and beyond.”

Sixth-grade teacher Cindy Peters has already started getting her classroom ready, even though school doesn’t start for a few weeks. One morning in early August, dressed in summertime attire of shorts and a T-shirt, Peters arranged the various textbooks on students’ desks.

“I want to get this all in order beforehand, so when my [Spanish-speaking teacher] partner comes, we’ll be ready to talk about this year,” she told a visitor.

“It’s a challenge, but everyone who’s here wants to be here. It’s comfortable. It’s like a family,” Peters said.

Being part of that family has been an inspiration for Michel, the former Pacheco student who now wants to be a bilingual teacher. Once she finishes her college education and becomes a certified teacher, she said, coming back to Pacheco to teach “would be a dream come true.”