How would you rate your imprisonment?

An Arroyo Grande couple was detained at the U.S. border and no one will tell them why 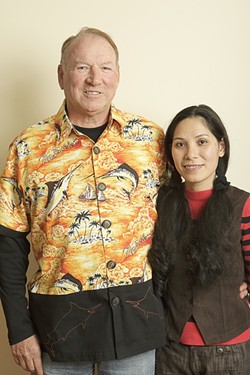 Richard Etzler and his wife Phuong (pronounced “Foon”) had never had a gun pointed at them before. But on Jan. 8 while trying to pass through the U.S.-Mexico border port of San Ysidro, the couple and two of their friends, let’s call them John and Nicole, had at least a dozen guns pointed at them held by a small army of U.S. Customs and Border Protection (CBP) officers.

They still don’t know why. After being held without explanation for about an hour, they were sent home with nothing more than a feedback card.

It was about 11 a.m. and Richard was sitting on a wooden bench in a windowless room with dirty white walls bordered by a stainless steel shelf. He was in handcuffs, as were his wife and friends. Richard turned to a gray-haired U.S. Customs and Border Protection Officer.

“It was a little bit hard for me to do it but I said, ‘Sir.’ You know I really wanted to say asshole,” Richard remembered. “‘Sir would you mind telling us why we’re in here, what you’re doing, and when we’re getting out of here?’ He … says, ‘You the ones that had the guns pointed at you?’ Yeah. And he says, ‘Well they’re just following procedure.’ You know I’m thinking, ‘Bullshit, that’s no answer.’”

Phuong, sitting in the same room, turned to another officer and asked why she was in handcuffs.

It would be hard to consider Phuong a threat. Wearing a red and black striped sweater, her hair in pig tails, she’s a small, shy woman whose voice squeaks when she speaks in broken English.

Richard and Phuong have been married for about two and a half years. They met in Vietnam while Richard was visiting friends and traveling the country in 2003. They married and moved back to the U.S. where they now share a home in Arroyo Grande. Richard, a retired nuclear engineer, has a vacation home in the Mexican city of Punta Chivato and he and Phuong go there about once a month to vacation, usually for about a week at a time.

But this time they invited their friends. Richard said he usually flies to the vacation home, but John and Nicole live in Orange County, so they decided instead to drive his truck and pick them up on the way. John said they passed through several Mexican checkpoints, but it was no big deal: “They were just really mellow about it.”

There are a few things you should know about John. First, he’s a retired Orange County sheriff’s deputy. His wife is also a Vietnamese immigrant. And lastly, John has had issues with his passport in the past. He thinks he might share a name with someone wanted by federal officials (his real name is about as ubiquitous as John Smith).

They tried to time the trip home to avoid the congestion that often clogs the San Ysidro border, the most heavily used U.S. border. As they were at the inspection point, John handed his passport to the border official and tried to explain that he’s had issues before.

It was too late. A red flag was triggered. The official made a phone call, told Richard to turn off the engine, and all hell broke loose.

“And then the next thing we knew there were bells, alarms, bullhorns going off,” Richard said. “It sounded like gates crashing.”

In fact, the automatic gates did close, tire spikes shot out of the ground, and a loud garbled voice came over the loudspeaker, Richard remembered. Six officials wearing green uniforms with guns ran toward the front of the car. Six other guards brandishing handguns took positions behind the car.

One by one, Richard and the other passengers were told to get out of the car and walk backwards, where they were handcuffed and led to a holding tank.

“It’s very scary with all these guns behind you—looking at you,” Richard went on. “So we’re just waiting and I thought you know, maybe somebody would come up and talk to us and ask us questions. But that didn’t happen.”

In custody, they were searched and questioned about where they lived and where they had come from. They weren’t allowed to talk to each other and still weren’t told why they were being detained. The only one among them who was treated differently was John, who was fingerprinted. When officials ran his prints through the computer system, they were simply released—no arrest, no charges, just a pink card to show the security guard on their way out. John remembered asking to speak to the watch commander but wasn’t allowed to speak with anyone in authority.

“They didn’t give a crap,” John said. “They were like, ‘Hey, we’re not accountable. We do what we want because this is the day and age for that.’ And that’s kind of scary.”

So without knowing what had happened, they were let go, but first handed a few comment cards; think of the “how are we doing?” type you might grab at a grocery store.

Richard and Phuong filed complaints with the CBP and contacted several state and federal officials, including Congressman Kevin McCarthy. They haven’t heard back from the CBP. John said he’s trying to find out if his name is on a no-fly list or if there’s another explanation why his passport seems to be a problem.

Vince Bond, a CBP public affairs officer, declined to comment on this or any other specific incidences, citing federal privacy laws. He said the number of such incidences at the San Ysidro border is “extremely small,” but occasionally people are detained and taken to a “secondary” inspection.

He added that anyone who has been detained at the border is allowed to speak with a supervisor.

As of this printing, Richard and Phuong are back in Punta Chivato. In fact, in a few months the couple will meet with CBP officials for a review of their marriage to solidify Phuong’s citizenship. And when they’re coming back into the U.S., Rich said he’s definitely going to have his comment card ready: “So next time I cross the border I’m going to have that thing in the air waving it at them.” ∆