A number of counties throughout California have put rental evictions on hold for the pandemic, but SLO County isn't currently one of them. With state protections coming to an end, leaders and community members throughout SLO County—including the Homeless Services Oversight Council (HSOC)—hope to see local protections in place soon.

Although SLO County and Gov. Gavin Newsom both issued orders temporarily prohibiting evictions when COVID-19 first hit, both expired on May 31. On April 6, the California Judicial Council adopted several emergency orders ensuring that eviction and foreclosure proceedings would not be conducted in court throughout the pandemic.

"So rent is still due," 2nd District Supervisor Bruce Gibson told New Times. "Evictions can still be issued. But they're not going to be processed."

Those restrictions are set to expire on Aug. 14. At a SLO County Board of Supervisors meeting on Aug. 11, several community members called in and asked the board to enact some kind of financial assistance or moratorium on evictions for renters who are still feeling the effects of the pandemic. 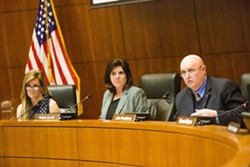 "This is causing a tremendous amount of concern," Gibson told New Times, adding that mass evictions could lead to a huge spike in homelessness locally. "My own sense is that we should have an order prohibiting evictions."

That potential for a spike in homelessness is a major concern, according to Grover Beach City Council member Mariam Shah, who also serves on the HSOC. Based on current unemployment numbers, Shah said HSOC estimates that anywhere between a few hundred and several thousand local households could become homeless because of the pandemic.

That could be especially true, Shah said, if nothing is done locally to protect renters and their landlords from evictions and foreclosures. Shah said calls for service to the Five Cities Homeless Coalition, which helps those struggling to keep their existing housing, have already doubled since the pandemic's start.

"So the wave of evictions is starting, and if nothing is done Aug. 14," Shah told New Times, "it really compounds and it could be a tsunami for this county."

Although the California Judicial Council announced on Aug. 11 that it will likely extend its protections until Sept. 1, rent relief advocates say that's not long enough. HSOC will discuss the looming deadline and possible rent relief solutions at a special meeting on Aug. 14. Those recommendations will be passed on to the Board of Supervisors. Δ