Huasna oil clean up in the works? 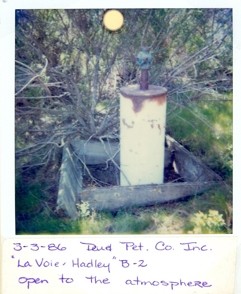 In Huasna Valley, a rural farming area littered with the remnants of failed or abandoned oil operations, residents have long worried that the oily puddles and open wells pose a threat to their surface and drinking water.

Now some residents see hopeful signs a state-ordered cleanup could be on the way.

According to a recent letter from the state Department of Conservation, which regulates energy resources owners, oil companies and mineral rights owners could be forced plug and formally abandon wells. Interested parties have 10 days to appeal.

A recent bid by Excelaron, a small San Luis Obispo-based oil company, to drill new wells or reopen old ones at several Huasna sites has brought new attention to the condition of old wells. And now, with the reemergence of a former Huasna oilman who left behind a mess 20 years ago, the state seems to be taking cleanup seriously.

The letter, dated June 22, 2009, called for several wells to be formally “abandoned” and subsequently sealed to prevent oil from mixing with groundwater. The letter specifically pointed to a half-dozen wells in the area where Excelaron has sought permits to drill. The Department of Conservation ordered the cleanup to start within 60 days. Otherwise, the letter warns, the department could move in and perform the work  at the owner’s expense. In bolded lettering, the letter said:

“The costs of the plugging and abandonment, including a $2,010 per well service fee, shall constitute a lien against real or personal property of the operator of the wells …”

Now residents are waiting to see if the county will tie the state’s concerns to the approval process for new drilling.

“I’m hoping the county will require the property and mineral rights owners to clear up all conditional use permit violations from the 1980s permit before even entertaining an application for a new
project,” Huasna Valley Association coordinator Ron Skinner said in an e-mail. “We believe code enforcement needs to follow [the state’s] lead and make sure this old mess gets cleaned up.”

It’s no coincidence that the state has decided to crack down now. Excelaron had been working with the county for more than two years to get permits, but the company failed to disclose its partnership with the former owner of Deuel Petroleum, the very company that left wells unplugged 20 years ago.

It was Huasna residents who uncovered that detail in March and informed the state. Days later Excelaron withdrew their application then before the county. Officials said they would seek a full environmental review before proceeding.

Excelaron did not respond to a request for comment.

The state and county divide their jurisdiction of oilfields. The county regulates everything above ground. County Planner John McKenzie said Excelaron has discussed resubmitting an application but so far the company has not. McKenzie said the department has not made a decision about whether Excelaron will have to clean up pipes and debris before the permitting process can begin, or whether it could be a condition of the permit.

In either case, McKenzie said the company would not be able to drill without first addressing existing environmental problems.